More Memories of the Mighty Mish 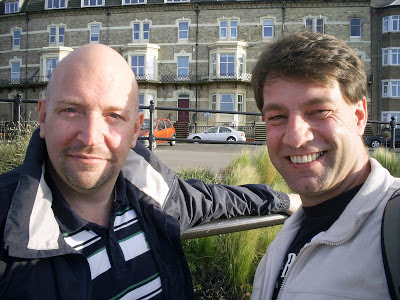 How the years have flown by since my great friend Mike Closs unexpectedly left us.

It was on this day 2010 when the awful news came through about Mike. It was an event that changed my way of thinking in many aspects.

I have written many times here at Marsh Towers about my times with Mike, playing alongside him for the chess of both Guisborough and Elmwood, during the respective clubs' most successful tenures. It is another sign of the passage of time that those two former giants of Teesside chess no longer exist.

We had so much fun over so many years that I still hold many previously unshared memories. Such as...
How he would have enjoyed being a part of the new successes of The Buffs chess club this year. He would definitely played alongside me again.

He would also have laughed at my choice of Jeepster by T. Rex for his funeral. We used to sing along to that on the way to our chess matches; so excited, so full of fire and enthusiasm - and a very strong desire of not wanting to be the one having to explain away a defeat on the way home.

We are still reunited, all these years on, in my vivid dreams. We still play alongside each; we still exchange the virtually imperceptible glances.

Soon we will play the 10th Mike Closs Memorial tournament, a series of events like no other. The previous nine editions of the tournament have helped the event to develop a long and distinguished history, with many experimental formats and venues.