Evita at the Middlesbrough Theatre


Little did I know that when I saw Evita for the 11th and 12th times at Regent's Park in the Summer that my next time would be so much closer to home.

I am sure The Middlesbrough Amateur Operatic Society knew they faced an enormous challenge to stage such a famous and popular play. There are so many things that have to be right and so many ways in which to go wrong.

Having seen various productions in numerous theatres - London (six times), Newcastle (three times), York, Hull and Leeds - it was with an open mind that I took my to seat to see how well the play would translate to a much smaller venue with an amateur cast.

Indeed, the word 'amateur' usually has negative connotations but from the opening moments it was quite clear that this production was of a very high quality. The set and the costumes must have used up a lot of preparatory time and resources. This was more in the style of the traditional version, rather the minimalist approach taken in Regent's Park.

One major difference from the West End and touring version I have seen so many times is Neil Harland's more understated version of  Che, which is more in keeping with the 1996 Madonna film. The overt imagery of Che - beret, combat gear - are absent, enabling an altogether more subtle - yet still very effective - performance.

The show featured a large cast, which is always necessary for the big song and dance numbers, especially Peron's Latest Flame, the humorous high-point of the play, which shows the unfavourable reactions to Evita displayed the well-to-do and the military men.

Of course, the play will always stand or fall by the key performance. I have seen numerous people play the part of Eva Peron and some have been more successful than others. Ideally, the actress needs to display a kaleidoscope of emotions covering a very wide spectrum, while retaining a definite air of ambiguity. Certain parts of Evita's personality and motivation must be left to the opinion and imagination of the audience. The life of Eva Peron was complicated and far from black and white. I was therefore very pleased to see what Mollie Shellard was able to bring to the role with her nuanced performance hitting all the required marks.

There is a danger of Evita overpowering the other characters as she breaks the confines of the play (which is, lest we forget, an anti-Eva Peron piece) but the Waltz for Evita and Che towards the end of the second half was on this occasion allowed to develop into something more physical than is usual, with Eva and Che literally waltzing around the stage rather than merely skirting around each other.

The attention to detail was evident too, with Eva's hair turning from brown to blonde once she had started on the path to the top and with the costumes becoming more lavish after each change. Part of the stage lifted to recreate the balcony of the Casa Rosada for one of the most iconic of all scenes, the one leading up to Don't Cry For Me Argentina.

The play runs until Saturday 2 November, so catch it if you can.

Meanwhile, Evita will continue to attract attention and audiences as it was announced this week that the Regent's Park version will be relocating to London's Barbican next Summer. I hope to be there to see Evita once - or twice - again.
Posted by Sean Marsh at 10:16 No comments:

The Death of a Gentleman

It is unfortunately time to relay the bad news of the death of a gentleman.

Richard Moore was a member of both Redcar Chess Club and the local chess association (under its various guises) for as long as anyone can remember - although 70 years has been mentioned.

Nobody ever had a bad word to say about Richard and I doubt anyone would ever have heard him criticise anybody else.

He was a model gentleman who never let his standards slip below the immaculate mark. He was always highly encouraging and very supportive to me, all the way from our first meeting back in the very early 1980s, when I made my debut for the county team.

At that time I played for Guisborough but attended Redcar Chess Club regularly too and I got know Richard a little more each week. I awkward had great respect for him and his standards. It was clear how much he enjoyed chess and how important it was to him to see everything done correctly.

Some of our openings were the same, such as the English Opening and Saemisch variation against the King’s Indian as White and the French Defence for Black. This gave us some common grounds for conversation, even though in those years Guisborough and Redcar were rivals in he league.

I know he was also very inspirational to Mike Closs, who started his chess life at Redcar Chess Club. In fact he used to take Mike to the county matches and Mike told me Richard always arrived at the end of the small road leading to Mike’s house at exactly the same time and parked in exactly the same place.

We played only four times in serious games. The first three I won but in our final encounter he outplayed me in a sharp middle game and I couldn’t shake off his advantage. I still think of that game as recent and was surprised to find it was fully 20 years ago.

Apart from that, our other games were friendly encounters. One day we played quite a few games. This was when Redcar Library (famous for its extraordinary number of chess books, thanks to the chief librarian there being another regular member of Redcar Chess Club) held a community day and we were two of the people there representing the club. I recall how Richard looked around all of the other groups and then looked at me and said: ‘Some people like to exercise; others like to wear chain mail; we like to play chess. It’s extraordinary, really; everyone likes doing different things.’

I spent three excellent years playing for Redcar when I returned after a decade away from the local scene. Richard took a very keen interest in my games, as did I with his.

Playing the game was, very clearly, much more important than the result, although he did not take defeat lightly within himself. Losing games hurt him just as did for everyone else, even though his competitive side was kept largely hidden.

Away from the chessboard, we were in touch for many years by traditional letter; a tradition which stopped just a few months ago. How quaint that will appear to readers now. He never mentioned to me that he was ill.

Richard was a serious collector of chess books. I visited his home on more than one occasion to view his magnificent library. He left me to browse but returned a number of times with more cups of tea. His collection never stopped growing. I cannot even begin to think just how many hundreds of books he had but I know the collection contained many rare items.

I surprised him once when I asked Yasser Seirawan to personalise a copy of his book, Chess Duels, immediately after I interviewed Yasser at Baker Street. I posted the book to Richard and he was so very grateful. Indeed, when he thanked me he was as excited as I had ever seen him. Yasser's inscription paid tribute to Richard’s many years of chess service.

Richard was 85 when he passed away. We all thought he would be around forever and, in many ways, he certainly will be as we strive to achieve and maintain the high standards he set and from which he never wavered.

Further tributes can be found here, from:

I was just finishing this post when news reached me regarding the death of another gentleman. John Boyers, former county champion and undoubtedly one of the strongest players Teesside ever produced, had been ill for some time and passed away last night.

I only even played John once but that was enough to understand how strong he was. I didn't know him as well I knew Richard. John was away from the local chess scene for many years but when he returned we did chat between games even though, as with Richard, we played for rival teams (John was a stalwart of Middlesbrough Chess Club.)

Losing both Richard and John in a very short period of time is a heavy blow. We shall not see the like of such gentlemen again.
Posted by Sean Marsh at 01:07 No comments:

The first stop on the tour for The New Adventures of…P.P. Arnold – her first solo album for 51 years – made for an excellent evening of soul and blues in Middlesbrough last night.

Arnold, a former Ikette, has worked with an extraordinary rage of people over the course of her lengthy career, including Mick Jagger, The Small Faces and Roger Waters, usually on backing vocals.

However, this tour brings Arnold to the front of stage and, backed by an eight-piece band, she is able to showcase her material and powerful voice.

Steve Craddock (Ocean Colour Scene, Paul Weller et al) is the leader of the band and his guitar work is exemplary.

The set list brought together prime cuts from all across her career and merged them with the material from the new album and three top shots were saved for the impressive encore.


Arnold turned 73 the day after the gig but age has had no apparent impact on her voice or energy. At various times during the show she talked a little about her experiences from a lifetime in the business, such as the time Mick Jagger took her a walk during the 1966 Ike and Tina Turner UK tour and persuaded her to stay in England to pursue a solo career. The stories never outstayed their welcome though and nor did they kill the pace of the show.

It was a very entertaining evening, albeit one with a smaller audience than one might have expected; with approximately 150 people, the show was in The Crypt rather than the main room. However, that suited those of us who enjoy intimate gigs just fine.

Apart from the excellent music, one was left with the impression that the drummer looks remarkably like Jack Harper (the conductor) from On The Buses, which kept me smiling all evening.

Keep up to date with the P.P. Arnold news and tour dates over at her official website. 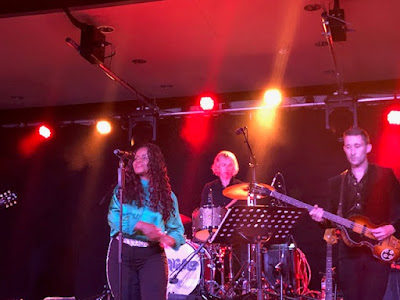 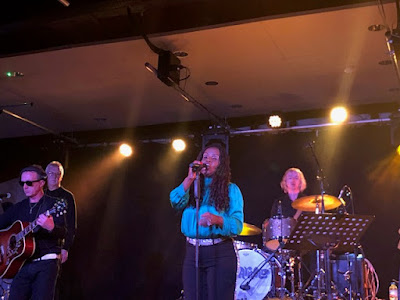 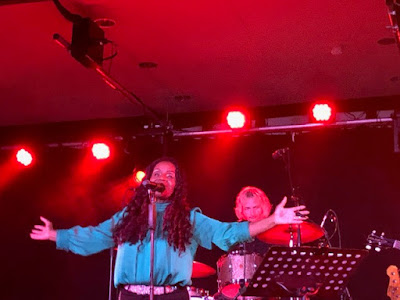 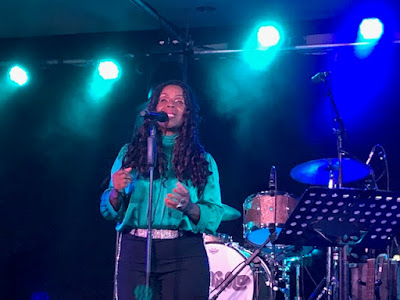 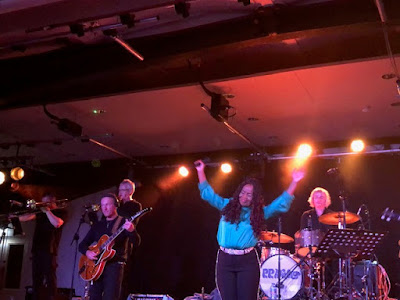