I carry the shame of my generation.

We have sleepwalked our way into a time of extreme problems.

Prior to this, the most recent case of sleepwalking into a nightmare world occurred in the 1930s.

The current problems are largely self-evident.

Just two weeks ago I wrote:

I hope schools are able to make a stand against the latest plan.

Everyone is much too valuable to be used as an experiment.’

A lot has happened since then.

A lot hasn’t happened since then.

Substantial pressure is being placed on schools to return to action. The campaign to name teaching staff as heroes dovetails so neatly into the ethos of the weekly act of clapping that it will act as a badge of shame for those who do not think it is safe to return.

The pressure is intensified; who would want to let the side down? Who isn’t capable of being a hero?

The nation needs its share of the ‘feel good’ factor.

The simplest example of such an artifice occurred during the 1939-45 war, when households were asked to donate points and pans and the railings from parks and gardens were removed, ‘to help the war effort.’

Lord Beaverbrook, the Minister for Aircraft Production, ‘We will turn your pots and pans into Spitfires and Hurricanes, Blenheims and Wellingtons.’

The unfortunate reality of the situation is that the metal was either dumped into the sea or merely left in scrap heaps, which rather dilutes the intended ‘do your bit’ feel good message.

You don't need to give away your pots and pans.

You don’t need an appointed time to clap for your heroes.

It will already have faded from memory that many people wanted to clap again for the ‘hero of the nation’, who recklessly subjected himself to the virus by shaking hands with infected sufferers.

Presumably someone told him Princess Diana once did something similar, during the height of a different virus. The finer detail of how the respective viruses were allowed to spread was either ignored or not present.

On the day some schools will open their doors to more than just key workers' children, the lockdown will be eased in other ways.

This will ensure there will be confusion when the second spike appears; the trail won’t lead clearly to the school environment.

I need schools to return to normal for the sake of my own business - but I don’t want them to return as I know it is not going to be safe.

There is no point in comparing the situation in the United Kingdom to that of other countries. It fails the test of comparing like with like.

One aspect that isn’t being talked about is just how will people - of all ages - react to a return to school after so many weeks away.

Any teacher will tell you how difficult it is to go back to teaching after the Summer break.  They now have to return after an unprecedented time away from their children, friends and colleagues. Any attempt to make that sound like an easy transition is pure bravado.

The spike in the spread of the virus won’t be the only one. The explosion of mental health issues will be unprecedented.

Nobody, anywhere, can successfully claim to be immune to such problems when their whole world is turned upside down.

Time and again I have said I believe in the next generation to make a much better job of everything once they have the opportunity to do so and I am deeply ashamed of the the state of the world they will inherit.

To the young, I apologise.

I carry the shame of my generation.
Posted by Sean Marsh at 03:07 No comments:

Many people have asked me about the future of the UK Chess Challenge since the start of the lockdown.

Our own Teesside Megafinal had to be cancelled, as did every other Megafinal. Unfortunately, there was no alternative.

I am now delighted to convey the big news of the solution devised by Sarah and Longson.

For the first time the UK Chess Challenge will be being held online. Throughout the summer there will be a festival of chess with all the regular events (Megafinals, Gigafinals and Terafinal) and a host of other championships including chess 960, chess variants and a Blitz championship. We will also be holding regular simultaneous displays with masters and past champions.

Unlike previous years once you have entered the competition you have a ticket to the full event – no requirement to pay extra for Gigafinals or the Terafinal if you get that far.

There are three options.

iii) “VIP Pass” which has everything in “Season Ticket” PLUS 2 x training sessions (in small groups) with past UKCC champions such as Sarah Longson and David Howell and a tailored report on your performance with tips on how to improve.

The events take place on lichess.org – the best place to play chess online and completely free registration. All participants will have access to full training on how to use the platform and all the safety features (though most will be able to just “pick up and play” as it is very easy to use).

Access to all tournament competitions (though qualification required for some events)

Access to video library – “How to learn and play chess online”

Incidentally, Sarah and Alex have been very proactive during the current emergency and have been producing lots of new material, details of which can be found on the Delancey UK Schools' Chess Challenge Facebook page and Twitter account.
Posted by Sean Marsh at 07:43 No comments:

I am in the fortunate position of being able to decide when I go back to schools. That is, of course, if I decide to go back at all.

Most of the UK schools’ workforce of over 1.4 million teachers and teaching assistants will not be able to choose for themselves. They have to rely on the judgement and planning of others.

The latest talk is of schools returning to action at the start of June.

This is an absurd plan which should be immediately stopped.

Imagine if people have to stop swimming in the sea because it is infested with highly dangerous sharks.

Then imagine people in authority make a lot of promises about testing the waters before they will people to return.

One person in authority boasts of visiting the sharks, metaphorically shakes hands with them, is badly bitten and then portrayed as a hero in some quarters.

Not only are the tests not carried out, but the amount of sharks is allowed to grow considerably.

Older people are forced back into the sea - and their friends are dragged in too. The number of fatalities is horrendous, but kept hidden.

Nothing has changed regarding the danger of the situation, but suddenly everyone is told they can return to the water too - as long as they stay alert.

Such actions are tantamount to manslaughter.

Would anyone be happy with such a situation?

Back to the real world - and the virus has not gone away. It will not go away in the near future. It thrives on situations of close social contact. We have over 67 million people in the UK.

Anyone who has worked in schools will know how ridiculous it is to suggest social distancing will work. Is everyone going to walk to and from school, two metres apart? Is it possible to stay two metres from anyone else in a classroom, a corridor or a school hall? It is completely unreasonable to expect young children to understand the situation and be compliant to any restrictions.

Some schools have remained open as hubs for the children of key workers. Fortunately, the numbers involved have been smaller than originally anticipated but that has not meant it has been a comfortable experience for anyone directly involved.

Specialist training and Personal Protective Equipment would be required for all staff to even begin to tackle the task. Is any of that in place?

Do you still think schools should return to action at the start of June?

Nobody seems able or willing to agree on a figure, but statisticians claim there have been 50,000 deaths, up to the start of May, over and above the rate we should expect for this time of year.

The hidden number of elderly victims is unlikely to be revealed in full. They were sacrificed, with infected patients being sent back to care homes in order to free up hospital beds. It should not have been a surprise that care homes were then so badly hit by the spread of the virus. They had no chance whatsoever. They were sacrificed following a particularly despicable piece of action.

School staff and children are to be the centrepiece of the next big experiment. Schools are the most social of all settings. Someone, somewhere will be crossing their fingers and analysing the figures.

I care about the children in my schools. I care about my friends and colleagues. I don’t want to see them used in this fashion.

The phrase ‘collateral damage’ is being used, which is not correct, for that relies on the key definition point of being ‘unintended.’

Just before the schools were forced to close, I witnessed, at first hand, the effect the situation had on the staff in my schools. Some were openly crying at the enormity of the challenges ahead. They are not weak people. They understood life was going to change and, in many ways, it would change beyond recognition. That is quite something for young people to have to accept.


People we know are going to die. The finishing post is NOT in sight.

I hope schools are able to make a stand against the latest plan. Everyone is much too valuable to be used as an experiment.

Some people care, some people don’t.
Posted by Sean Marsh at 00:58 No comments:

What is the connection between The Kiss of Death and the annual CSC Head Office party?
To find out, head here for the latest episodes of the CSC lockdown blog.
Posted by Sean Marsh at 13:30 No comments: 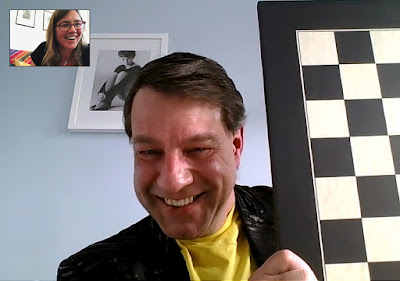 Kineke Mulder of Chess Unlimited is one of the most positive of all chess personalities and I was delighted to be interviewed for her series on chess people.

English and German versions are available!

German Version
Posted by Sean Marsh at 01:07 No comments: