Scott Lloyd: Looking Out To Sea

Scott - born in Middlesbrough on Teesside and now based in Manchester - has been featured several times before here at Marsh Towers (see the index below).

Now he has returned with a brand new single and some more good news. He has signed with Cornwall-based independent label Aardvark Records and will be playing number of gigs down in Falmouth to mark his official launch on the label. This will ensure Scott's music reaches the wider audience it deserves.

In our in-depth interview, presented here just over a year ago, Scott told me of his aims and they included 'Short term I think it’s to try and write great songs and try to let people hear them as best I can.' Which brings us neatly to Looking Out To Sea.

The new song starts off softly and then the main music crashes in just like the waves of the sea. The theme is man caught between his youth and the need to move on, being 'a bit scared' because he can't stop the 'turn of the wheel'. As the scale of the worry and the problems starts to build, the solution is a trip to the coast, both physical and allegorical, with his future wife. While looking out to sea, 'those waves inside of me crash against the cliffs' and this leads to a cascade of memories from simpler times, 'where spaghetti hoops were a superfood' and puts all of his current worries and doubt into a more stable context, counterpointing the past and the future in equal measure ('I'm flying the flag of this family's past/I won't let it rust, I know I won't be the last'). The song then comes pleasingly full circle as the music slows down to match the diminishing pace of the waves before coming to a very gentle finale.

In some ways Looking Out to Sea follows up on the themes explored on the title track of In the Garden, taking the story of development and the juxtaposition of the glorification of the past, the worries of the present and the fear of future a stage further.

This is not manufactured, conveyor-belt music; Scott crafts this songs carefully. His style continues to develop and it is clear to me Looking Out To Sea is his best song to date.  He is quite prepared to 'give it some time', 'taking the long road' because he 'wants to see the views'.

If you have yet to sample Scott's music, now is an excellent time to start.

Give Me Something Review

In the Garden Review

Find and follow Scott in all the usual places:

(All images used in this review are © Trust A Fox
Posted by Sean Marsh at 22:37 No comments:

Project 30, my year-long series of celebratory events, is now reaching its conclusion.

Here is a summary of events.

I played Matthew Jackman in the final and there is a report here.

This concluded yesterday and here is an update on the results from the previous report:

The celebratory tournament took place in March, featuring specially invited players from my three chess clubs (Guisborough, Elmwood and Redcar). This was the day the snow returned and some people couldn't make it through! A full report can found here.

A report on the 9th Mike Closs Memorial Tournament can be found here.

This special event at Stockton Central Library was a great success and a report can be found here.

One of the best evenings of my life! A report can be found here.

WFM Sarah Hegarty's simultaneous display at Ings Farm Primary School was one of the first Project 30 events. A report on this very memorable day can be found here.

GM Matthew Sadler and WFM Natasha Regan came to Yarm School for a very special Chess for Life event. Head here for an index of our reports on this wonderful day.

We are currently awarding a trophy prize to the outstanding students in each of our CSC Teesside schools.

Another brand new event for 2018, this will take place at Park End Primary School this week and children from all 16 of our CSC Teesside schools will be invited to pit their wits against each other.

A concluding report will follow soon.
Posted by Sean Marsh at 22:27 No comments:

The games were wild and very tactical, thanks to the themed openings we used in each round.


The players had to turn over a card to reveal their tournament number (which determined the order of play) but before doing so they had to name the people in the photographs and say what their respective connections to chess actually were.

We made a random draw before each round to determine which of the 12 nominated openings we would have to use. All were used by Mike many times.

The openings we used were...

The games were great!
Uniquely for this annual event, the players were all from the same club and essentially made up the double-winning Redcar A team (only Julian Allinson was unavailable).

Matthew and Andrew were making their Mike Closs Memorial debuts and former champion David Baillie maintained his 100% attendance record for this event.

The games were great fun and given the unfamiliar territory (none of the five players have had much experience using Mike's favourite openings) there were plenty of blunders but lots of brilliant moves and fabulous games too, as everyone fully entered into the spirit of the occasion.

After a full afternoon of dangerous play, the final scores were:

Once the intense chess had ceased, we visited Cena in Yarm for our traditional post-tournament meal - and very enjoyable it was too.

Thank you Andrew, Dave, David and Matthew for supporting the event. I am sure Mike would have approved of the sharp openings and fighting chess.

The 10th Mike Closs Memorial Tournament will take place in 2019.

Reports on previous editions of this event can be found here:

Today we bring our week of tournament previews to a close as we look forward to tomorrow's memorial event.

This classic photograph depicts Mike teaching three members of Guisborough Chess Club back in 1995. From left to right we see Mike, Gawain Jones (now a brilliant Grandmaster, of course), Chris Bond and the late Mike Welch. 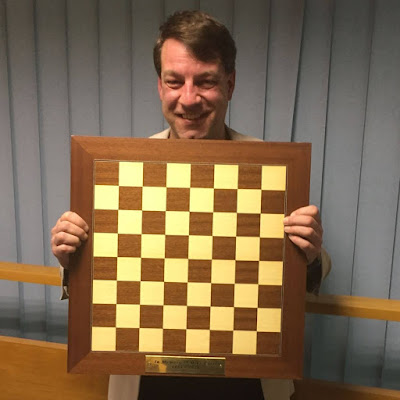 Earlier this season I was delighted to be able to play, for the first time, on the Mike Closs Memorial Board, which is the property of Thornaby Chess Club.

Now, onwards, to the tournament...
Posted by Sean Marsh at 23:13 No comments:

We are now just two days away from the 9th Mike Closs Memorial tournament.

It has been quite a week of reflection, thinking back over our times, tournaments and triumphs together, all the way from our first meetings (on board one for our respective school teams, Warsett and Westfields) up to to our final mutual team successes for Elwmood (finishing with another league and cup double, over a decade ago).

Here are  a few images from over the years.
A simultaneous display at Billingham Synthonia chess club, back in 2006. We played four boards each.

Mike taking a keen interest in my game against David Spence. This was the crunch league game for Elmwood against Middlesbrough Rooks. We won a very tough match to take the title.

Side by side at the 2003 Tom Wise KO Cup final against Athenaeum. We both won to secure another double for Elmwood.

Lots of trophies for Elmwood during the golden years.
Another cup final. Such intensity as we defended our title against Peterlee.

Well, we cannot bring back those days but we certainly made the most of our time together. I think he would have approved of the tournament we have lined up for him this weekend.
Posted by Sean Marsh at 04:11 No comments: