Gigs come in many shapes and sizes and the journeys to and from them can be equally varied.

Two years have flown by since I first saw Emma Stevens, at Stockton's Arc. There were no North East dates on this particular tour, which meant another expedition to Manchester. 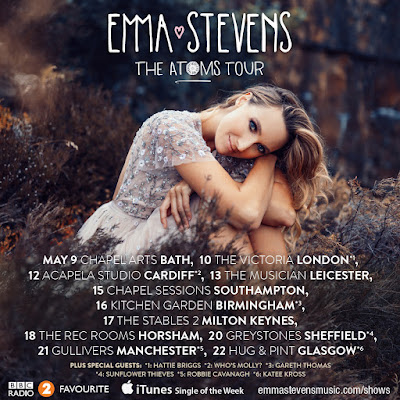 This was the Atoms Tour, to celebrate the release of Emma's new EP. Atoms is excellent and can be highly recommended, but its release was not without problems, being tied to the Pledge Music system, which collapsed leaving many artists severely out of pocket. Big-name acts were caught out too but for independent artists the impact of the collapse could prove to be particularly severe. For someone as dedicated to her art as Emma, there was clearly no question the release would be abandoned and Atoms duly arrived, but no doubt at a huge personal cost.

It was quite a journey to get the Manchester too. Everything seemed fine until the train ground to a halt after 10 minutes. The train in front had somehow run into a herd of cattle and the lines were completely blocked. I could see the 'cancellation' messages appear on the station boards. After waiting for nearly an hour, the train received permission to back up a few miles and try a different route. This worked well, until the much-delayed train was called to a permanent halt a couple of stops down the line. All change! The next train was much-delayed too but was making a good effort to make up for lost time, only to be told it would have to terminate a few stops early. The remainder of the journey was made on shanks' pony.

The journey back was eventful too. The taxi driver turned out to be a big fan of musical theatre, which led to a very interesting conversation on the subject, but unfortunately the subject changed dramatically due to an unfortunate incident involving deer, who had chosen a bad time to try to cross the road.

All is usually forgiven if the gig in question turns out to be worth the difficult journeys. Fortunately, that did indeed turn out to be the case, as Emma, flanked by a brace of Sams, brightened up everyone's world with a wonderful set of uplifting and positive songs; a rewarding fusion of folk, country and pop.

I had only been to Gullivers once before when, despite the intense summer heat, I enjoyed on of the gig highlights of 2018 thanks to the excellent Eilen Jewell. It was a cooler evening this time and the rook was set out cabaret-style.  Despite the strange journey leaving very little time before Emma arrived on stage, I was still able to bag a seat very close to the stage. 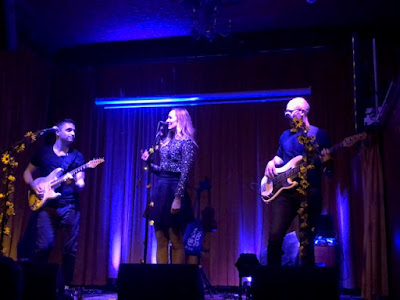 Emma has such style. Her genuine personality connected very well with the audience. The between-song chat also added to the experience. I always find it interesting to hear the stories and inspirations for songs, but it can often be bittersweet. For instance, Emma spoke of her mother's belief in her future as a solo artist but it was only when she was diagnosed with terminal cancer that the musical journey really started on the road to fruition. At the other end of the emotional spectrum, it came as a surprise when Emma discovered one of her songs - which had been used in TV shows in China - had been streamed many millions of times, leading to a recent tour of the country.

The set took the audience through a whole range of emotions, from the moving Sunflower through to the liberating Shoot the Breeze With Me. They, together with Atoms, were my favourites of the evening.

There were a couple of sing-alongs to bring the people further together and there were even sweets thrown from the stage as random rewards. 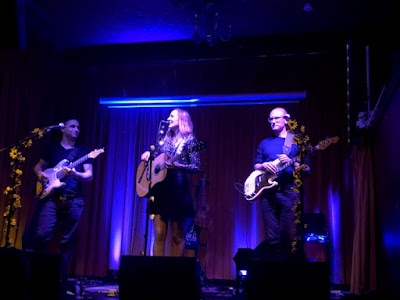 A Place Called You
Star That Guides You Home

Emma is very happy to meet people after the show; it's hugs and sincere thanks all round.

It is no secret that there is a growing trend to be negative, hyper-critical and destructive. What we need is more positivity, more generosity.  What we need are more people like Emma Stevens to bring back the positivity.

That really will be quite a journey.

Meanwhile, I still have the sweets I caught...

Keep up to date with the latest news and tour dates over at Emma's official website.

Now, about adding a Teesside date to the next tour...
Posted by Sean Marsh at 01:28