Meschiya Lake and The Little Big Horns at The Arc

Meschiya Lake and The Little Big Horns
The Arc, Stockton
7.9.2012

Meschiya Lake and The Little Big Horns hit Stockton earlier in the month. Having recently reviewed their CD, Lucky Devil, I knew roughly what to expect from them from an audio point of view but the visual aspect delivered some welcome surprises.

Musically, a mix of jazz, blues and torch songs rub shoulders with the spirits of Duke Ellington, Bessie Smith, Jelly Roll Morton, Frank Sinatra, Dean Martin et al, presented via a medium of genre-busting musicianship and fronted by Meschiya Lake, who could have stepped out of the past, the future or just about any point in between.

The vocals are strong; sung with feeling every step of the way. As the first number began - One Sweet Letter From You - another ace up the sleeve emerged, in the form of dancing couple Chance Bushman and Amy Johnson.

Forget anything you see on TV; this is real dancing. For virtually the entire course of the evening, Chance and Amy tore it up with an amazing display of jazz dancing, tap, Lindy Hop, Charleston and several other genres thrown in for good measure.

The musical arrangements, with their lengthy mid-song musical breaks, created perfect opportunities for the dancers to grab the full attention of the audience. At such moments, Meschiya remained at the centre of the stage with a contented smile on her face and her hands behind her back, like a circus ringmaster observing - and thoroughly enjoying - the performances of her talented troupe.

Indeed, Meschiya has a not-so-secret circus past, although there was no time for eating glass or fire dancing on this occasion. Flames did make a guest appearance at one point though, when the band segued into Happy Birthday and a cake was brought to the stage and presented to Meschiya (albeit approximately four hours early).


The show was in two parts. The first ran for about 40 minutes and featured the following songs.

One Sweet Letter From You
Why Don't You Do Right
Sweet Substitute
Buona Sera
Egyptian Ella
Lucky Devil
That's What Gets Results(? Not entirely sure about the title of this one)
Reefer Man

The half-time break saw Meschiya in CD-signing action in the lobby, a stint which proved popular with her new fans.

The second half lasted just over 50 minutes and started with an instrumental number to allow Meschiya to get back onto the stage after her signing session.

The Royal Guardian Blues
? (Title unknown -  a French-language song, which was interrupted by...)
Happy Birthday
Curse of an Aching Heart
Satan Your Kingdom Must Come Down
Kiss to Build a Dream On
Miss Otis Regrets
Midnight on the Bayou
I Believe In Music

I Wonder Who's Kissing Her Now

(As always, I'm open to corrections in the set list. Please send me a message via the comment box if you spot any errors).

It was a thoroughly entertaining evening. Meschiya Lake and The Little Big Horns are a unique act and it's little wonder they are attracting many new fans on their travels. Hopefully they will be back in the region before too long, especially as they have a new CD in the pipeline (how about a DVD one day, Meschiya...?)

Further details are available on the official website and over at their Brookfield Knights page.

To conclude with, here's a few more photos from the remarkable evening. 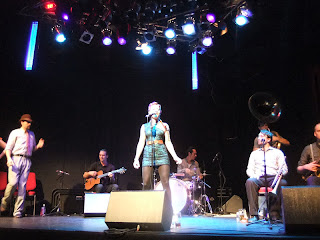 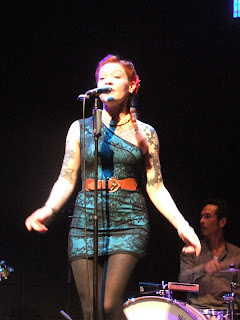 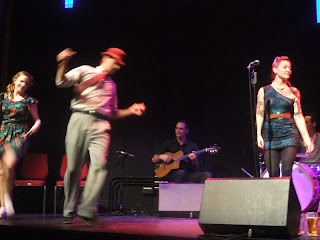 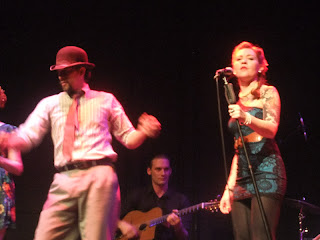 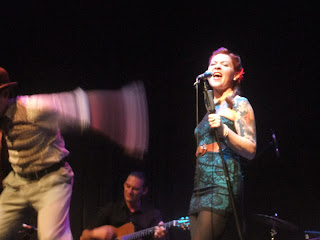 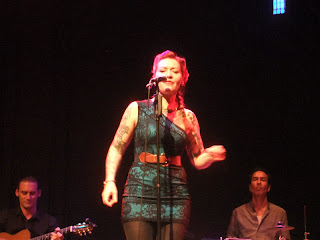 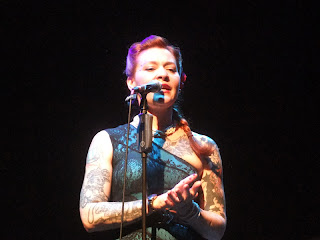 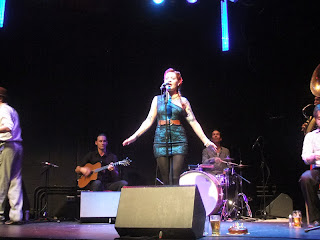 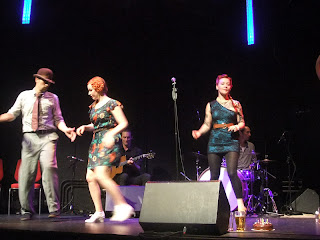 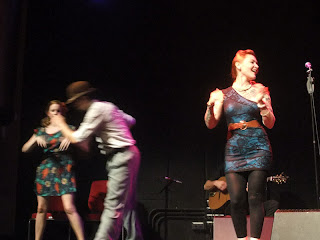 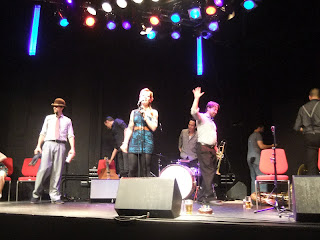 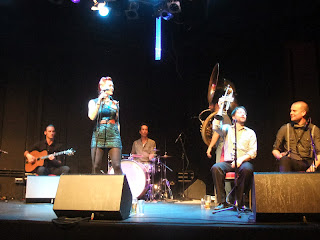 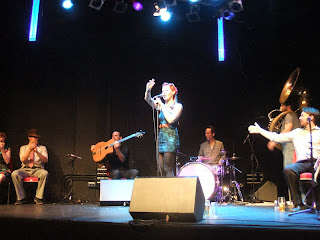 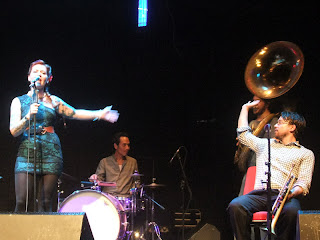 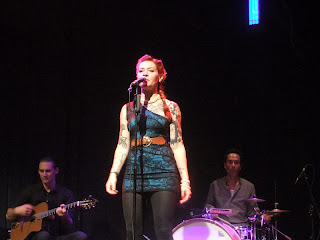 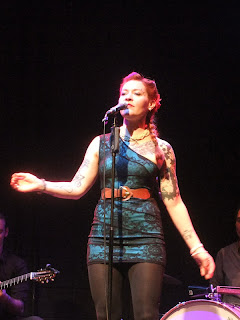 Amy Speace's Kickstarter appeal has been set up to fund production of her new CD, How To Sleep In A Stormy Boat. Various reward packages are on offer, depending on the amount pledged.

Readers may recall similar appeals for Rachel Harrington and The Knock Outs, The Wiyos and Two Man Gentleman Band which were covered here at Marsh Towers.

Head for Amy's Kickstarter page and her official website for further details.
Posted by Sean Marsh at 13:30 No comments:

Tickets are now available for the Bridie Jackson and The Arbour event.

Tickets cost £12.50 each and are available from three places.

Chess at the Library


The venue of our latest chess tournament was the splendid Middlesbrough Reference Library. The event had three main aspects.

1) To celebrate 100 years of the Middlesbrough Library. Built the same year as the Titanic, it has lasted somewhat longer.

2) To continue our series of Mike Closs Memorial tournaments. This was the third such annual event.

3) To celebrate my 25 years in business (more events will follow over the course of the year).

The ubiquitous Sara Dennis was responsible for bringing the tournament to the library and her trademark touches were in evidence right from the start.


The day started with a talk by me featuring a game played against Mike at a Hartlepool Rapidplay event (a French Defence, of course).

Then it was straight into tournament action, with a double-rounded '5-minute' contest. The action was fast, furious and wonderful (and occasionally blunderful).

The tournament took a break for lunch time and then we were treated to an excellent and very instructive talk by former British Senior Chess Champion David Smith, who demonstrated one of his games against Mike.


Then it was back into battle with the last two rounds of the tournament.


I had invited some of our top local juniors and they enjoyed the experience. I invited some of my former juniors too and it was great to see them again. I am hoping to meet up with magnificent people from the past during my 25th year celebrations.

After the tournament had finished, it was time for the quiz. This time it featured photos, names and puzzles all relevant to the year 1912, so we could keep in mind the library's anniversary year.

Congratulations to Julian, on winning the tournament!


The quiz champion was Dave Baillie, with an excellent score of 21 out of 28.

Thank you to everyone who took part and to Sara plus everyone else who helped behind the scenes. We'll be back soon with more special events.