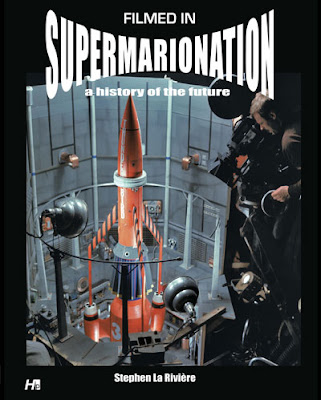 A History of the Future

With a Foreword by David Elliott

There can’t be many people who haven’t seen even just the occasional episode of Thunderbirds, Captain Scarlet or Stingray.

The name Gerry Anderson has been synonymous with entertainment for as long as most of us can remember. There have been plenty of books on the Anderson shows and it is easy to feast on - and thoroughly enjoy - all of the classic shows on DVD. What can a new book bring to the table?

Author Stephen La Rivière verbally agreed to write the book back in July 2004, with the ‘famous first words’, “Yeah, I can do that. Easy.” Over five years later the fruits of his labour is finally available. Fortunately, the shows ‘filmed in Supermarionation’ are timeless rather than topical.

As David Elliott says in his foreword:

‘It’s hard to believe that after fifty years the interest in the puppet shows is as strong as ever. And for fans old and new, at last here is the book that tells the real story of those enjoyable years and how it all happened…’

Mr. Elliott speaks with authority, having spent nine years as Director, Editor and Production Supervisor on everything from The Adventures of Twizzle to Thunderbirds.

Telling ‘the real story’ is exactly what the book aims to do. The author makes it clear that this not an episode guide (Chris Bentley’s ‘The Complete Gerry Anderson’ is a very useful volume for that). Instead:

‘This book’s sole purpose is to examine the history and development of Supermarionation on television and at the cinema, and tell the story from the studio floor, both the good times and the bad.’

The story is told in eleven chapters:

The Adventures of Twizzle and Torchy the Battery Boy

8. This is the Voice of the Mysterons

Captain Scarlet and the Mysterons

9. Tiger in the Tank

The chapters are followed by three short end pieces:

Every one of the shows is given thorough coverage, but the story starts even before the first string was pulled.

A pivotal moment in the history of ‘Supermarionation’ occurred in a most unlikely place; a small advert in the Maidenhead Advertiser (August 17th, 1956):

Sylvia Thamm - the future Sylvia Anderson - was the successful applicant. A very important piece of the creative jigsaw was now in place.

Gerry Anderson’s name will be forever associated with puppets, but from very early on he was than happy to be working on something that wasn’t live action:

“A woman called Roberta Leigh turned up one day with 52 scripts for a series called Twizzle,” says Gerry Anderson. “She asked us if we’d like to do them and we said, ‘Yes!’ Then she said they were with puppets and I nearly vomited on the floor.”

He remained optimistic for a change, but the switch to live action took longer than anticipated:

Stephen has done a remarkable job and produced a volume well worth the long wait. He has made excellent use of archive documentation and new interview material to dig deeply and bring out the inside story from the humble beginnings to international fame.

Gaining the appreciation and backing of Lew Grade was another important step and there are plenty of great stories about him here. The trust he showed was incredible.

In one meeting to discuss the future, anticipating Lew’s inevitable question, ‘What’s the new series, Gerry?’ he had been inspired by a real-life disaster concerning some miners trapped beneath a lake in Germany and the efforts to rescue them.

‘…I said, ‘Look, Lew, I’ve got an idea, but I’m not sure you’d want to back this one.’ He leapt out of his desk, strode around the desk, grabbed me by the scruff of the neck, hauled me to the centre of the office then said, ‘Do you see that light bulb up there?’ I said, ‘Yes’. He said, ‘Gerry, if you want to make a series about that light bulb, I’d back it.’ So we sat down and I told him what it was going to be. It was going to be called International Rescue and he said, ‘Sounds good’.

It turned out to be more than merely ‘good’; Thunderbirds was a huge success and saw the world of ‘Supermarionation’ reach a real high.

Unfortunately, things were soon destined to change. The disintegration of Gerry and Sylvia’s marriage is covered here too and the story is brought to an end in 1969 following one of the ‘forgotten’ shows - The Secret Service. This strange show merged live action with ‘Supermarionation’ to a far greater degree than a show of hands in Captain Scarlet and brought in the priceless - yet often misunderstood - talents of Stanley Unwin and his amazing propensity for ‘gobbledygook’. The idea was to have the hero being able to get out of scrapes by gently confusing his opponents, as demonstrated by this snippet:

‘POLICEMAN: You’re not obliged to say anything unless you wish to do so, but what you say may be put into writing and used in evidence.

POLICEMAN: I, er… I didn’t quite catch, that sir.

UNWIN: Ah pardlow, I’ll explaidy. Now Matthew my gardener is deep joy with green fingers in the garbage, you understabe?’

When Lew Grade watched the initial screening, his reaction to the gobbledygook was somewhat unexpected.

This was followed by the suggestion:

This brought mixed feelings for the crew, with the now redundant puppeteers feeling ‘…a slight sense of betrayal; that Gerry had left behind the people who built his fame.’

On the other hand, Gerry himself, ‘…freed from the manacles of Supermarionation’ was ‘…unmoved to see his puppet days behind him. As a leader of a group of pioneers, he looked to the future and enjoyed his new association with live actors: “I started to think: ‘It’s amazing! They speak! Their mouths are in sync with their words! And they can walk! And they can pick up things! Boy – this is going to be absolutely fabulous!’ That was my first impression…” 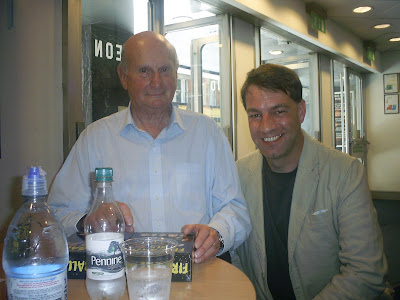 I had the pleasure of meeting Gerry Anderson at the launch

of the Fireball XL5 DVD earlier this year in London

Filmed in Supermarionation is a visual feast, with an abundance of photos from all of the shows including many from behind the scenes. The vast majority of these were new to me. The text is further augmented by the addition of concept drawings, excerpts from publicity brochures and even a storyline for an unmade episode of Supercar.

I thoroughly enjoyed reading this book and as a work of reference it will doubtless stand the test of time. A further volume, taking up the story from UFO onwards, would be very welcome.

For further details, including how to order the book, please pop along to the official website:

http://www.filmedinsupermarionation.co.uk/
Posted by Sean Marsh at 00:59