Suggs At The Arc

The Arc pulled off another significant coup when they brought Madness frontman Suggs to Teesside. The venue had sold out some weeks before, and for a show as good as this it should not have been a surprise.

The show was virtually identical to the one I saw in Islington back in 2011, with just the odd tweak here and there (such as a quick topical reference to Jimmy Savile during Suggs's reminiscences about Top of the Pops).

The main difference between the two shows concerned the amount of hecklers. In this category, Stockton knocked Islington into a cocked hat, although Suggs was more than equal to the task. As he appeared on the stage, resplendent in green and blue checked suit, one local wag bellowed: ''Jolly Green Giant!'' to which Suggs replied, ''Not so much of the ******g jolly!''

Elsewhere, a couple of other vocal local yokels seemed convinced they were part of the act and were not shy about contributing their own lines.

Despite such distractions, Suggs told his fascinating, amusing and - at times - very moving life story in great style.

For some time, he has been planning a book based on the show but progress has apparently been slow. The current (intended) publication date is October 2013.

The show stood up well to a repeat viewing and I can recommend it for anyone seeking an excellent evening of entertainment. 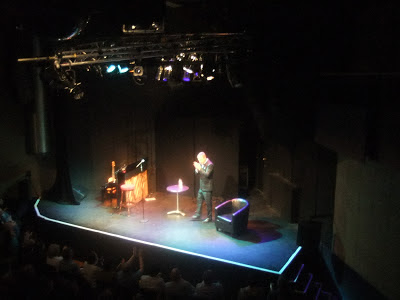 Keep up to date with the tour over at the official website.
Posted by Sean Marsh at 05:16