Sham 69 at the Georgian Theatre

The Georgian Theatre continues to present an extraordinary and diverse range of acts, featuring all genres of music. Their latest offering was a real invitation to don the bovver boots and 'unite the kids'. Sham 69! Who would have thought they would ever come to one of Stockton's most intimate of venues.

This could almost be called the 'class of '77' version: Jimmy Pursey on vocals, Dave Parsons on guitar and Dave Tregunna on bass with Robin Guy on drums (a relative newcomer, having joined in 2012). There is another version of Sham 69 still also on active duty, fronted by Tim V, but I am, sure the majority of people would favour the full Pursey experience.

This gig had be rearranged from its originally scheduled date in March, which is why I had a particularly busy weekend and had to dash back from Gateshead to be in time for this one.

No Thrills set the scene nicely with a loud and energetic performance. The hall then filled up in anticipation of Sham 69's appearance. 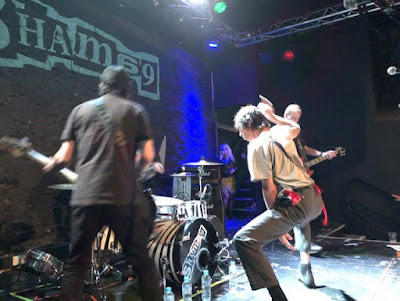 Pursey was the last one down to the stage; stooping in front of the drums, back to the audience, he beat his hands upon and down in time with the drumming before finally turning around to be greeted by a loud cheer from the audience.

They tore through the set at great speed, whipping up the crowd to a frenzy of punk energy. The central core of the crowd side exactly what one would expect, surging backwards and forwards and displacing everything and everyone one in their way with their tidal - and tribal - energy. A couple of people climbed onto people's shoulders but they were quickly brought down by the security staff. It was the wildest crowd I had seen at the Georgian Theatre since the night of The Skids. No real menace; no actual violence; just a few overenthusiastic local yokels making sure they had a good night.

Sham 69 were on great form but they missed several songs from the set list and - to the surprise of everyone - the show was all done and dusted by 10.30 p.m. The set had lasted a little under an hour, which seemed a shade on the short side.

Nevertheless, the gallery will hopefully convey a little of the energy Sham 69 brought to the evening.

2019 is shaping up to be a good year for punk and this was worthy follow-up to my recent Bikini Kill experience in Brixton - and the year is definitely not done with punk yet, believe me. 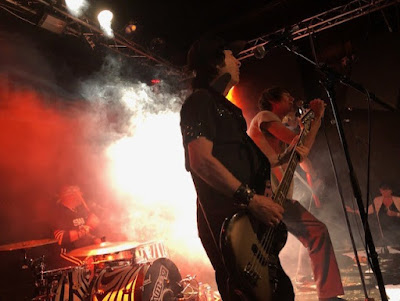 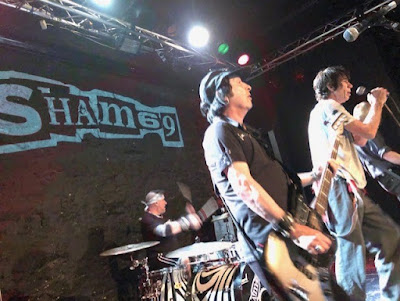