Nick Heyward at the Georgian Theatre

The run of Easter gigs finished on a high with the return of another very popular star.

Nick Heyward had been at Arc not so long ago but this time it was an 'up close and personal' experience at a more intimate venue.

Unusually for the Georgian Theatre, this was an all-seated affair, which meant there was a queue to the music room door as people tried to assure themselves of a front-row seat.

It is not just Nick's music that holds appeal for most of the audience; he is still a big hit with the ladies too. This became apparent very early on when he struggled to keep the microphone in position and he was immediately deluged by an army of offers to come up on the stage and hold it steady. 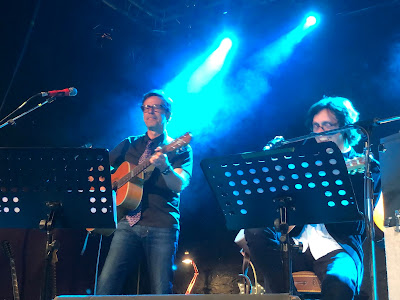 Love Plus 1 was a crowd-pleasing opener; most artistes would have built up to the big hitters, but Nick clearly had great confidence in his material. Several times he changed the set list to cater for shouted-out requests. There were also several stories between the songs, including a tale of Haircut 100's first manager, who didn't exactly come out of the evening with a glowing reputation.

A lucky lady at the front was handed the set list by the man himself. I asked if I could take a photograph and she said only on the condition that I photographed her too. So here we are...

Yes, it was a great week for the Georgian Theatre and several more are already planned...
Posted by Sean Marsh at 22:36