When I name-checked Lucy Rose last month, it was safe in the knowledge that I had a ticket for her sold-out Manchester gig. Admittedly, I had left it a little late and there were only two more left when I bought mine.

Stoller Hall was a new venue for me. The wood-pannelled walls reminded of The Sage and Manchester's own Bridgewater Hall, although Stoller Hall is considerably smaller than either of those  venues.

Lucy Rose gained considerable publicity from her supporting role on Paul Weller's tour of last year. Now, with her latest album, No Words Left, just one month old, it was time for Lucy Rose to take centre stage on her own UK tour. 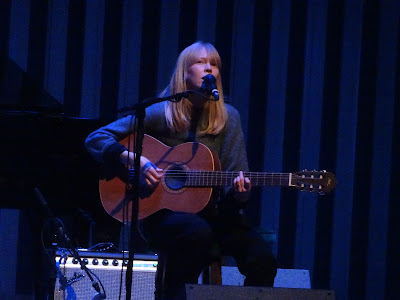 No Words Left is delicate and introspective. Elsewhere, Lucy Rose has written of her pre-show nerves and how 'What scares me the most is that I don’t want to be famous.' This is perhaps why she surrounds herself on the stage with a six-piece band - all of whom have roles to play, of course - but who spend significant amounts of time resting, due to the stripped-back guitar and keyboard nature of most of the songs.

The set list centred quite naturally on No Words Left and the show was as remarkable as I thought it would be. Take a listen to tracks such as Solo(w), The Confines of this World and Conversation and they will summon up the spirit of the Stoller Hall show.

It was a fine, enchanting evening, augmented by Sammantha Crane and her quirky songs as support.

I hope to return to Stoller Hall, which is an excellent venue. I would definitely like to see Lucy Rose again too, but she seems to have some sport of internal battle going on. Will fame catch her, as her reputation continue to grow? Or will she remain as elusive as the meaning of some of her songs? 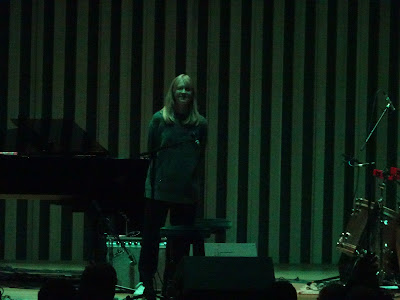