Yuzoo at The Georgian Theatre


The Georgian Theatre celebrated 10 years of their Sound of the Eighties series last night with a disco followed by the tribute act to Yazoo and Alison Moyet.

The disco took a little while to get going but once people were enticed from the bar they found plenty of interest, with 1980s album covers adorning the walls and other typical trappings of the decade scattered around the room, including face masks of everyone from Freddie Mercury to Steve Strange, glow sticks, bubbles, balloons and badges (such as 'Choose Life' and 'Frankie Says Relax'). 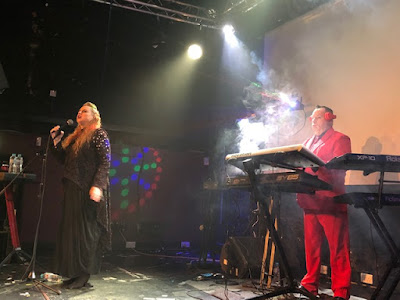 The room had filled up nicely by the time Yuzoo took to the stage (around 9.30 p.m.) and alls seemed set for a lively, atmospheric evening. Yes sounded great and they played all of the songs one would expect to hear, but for some reason the audience was not fully engaged and numerous people preferred to talk loudly amongst themselves, while the numbers steadily reduced as others decided to head for the bar.

Those still in the room were determined to have a good time and Yuzoo did exactly what they should have done - they just kept going despite the distractions.

As a celebratory event, the evening should have been so much better. The fickle elements of the audience are to blame for the strangeness and this led to a rare disappointing evening at the Georgian Theatre.

Hopefully Yuzoo - who had a long journey from Cornwall - will return to Teesside at some point to find a more engaged audience.