The Cureheads and Siouxsie and the Budgies at the Georgian Theatre


Two Goth tribute bands lit up an otherwise wet and windy Friday night in Stockton, as The Georgian Theatre continued to go out of their way to provide a diverse programme of entertainment.

Siouxsie and the Budgies were first on and they played an excellent 11-song set, featuring everything one would expect to hear from the repertoire of Siouxsie Soux and the Banshees, including Hong Kong Garden, Christine, Arabian Knights, Happy House and Spellbound. There was even a version of Iggy Pop's The Passenger, which broke the last of the ice between stage and audience, enticing the pack to advance to the edge of the stage.

The hall was packed out and everyone seemed to be in a good mood. Lets face it: tribute bands can be very variable in terms of quality and audience endurance (I used to avoid them, but T-Rextasy and Ultimate Bowie led to a personal conversion), but both of these hit the mark in style. When The Cureheads hit the stage, the audience was more than a little warmed up and the party atmosphere went into full swing.


I have to confess I have always liked Siouxsie Soux and the Banshees considerably more than The Cure, but that didn't stop me thoroughly enjoying the hard work of both bands on this evening.

The Cureheads played 21 songs, with all the usual suspects (Close to Me, Lovesong, Pictures of You, Just Like Heaven et al) well to the fore. There was also a late-in-set medley, including Firestarter (in tribute to the recently deceased Keith Flint) and various snippets from Blackstar (in tribute to 2016's serious loss). 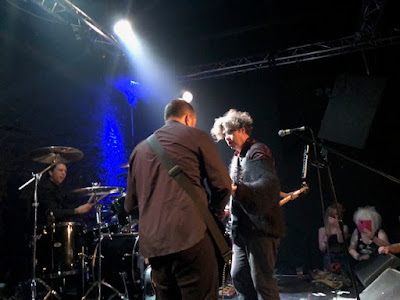 Boys Don't Cry and Killing an Arab proved to be perfect closers, with 'Siouxsie' jumping back onto the stage to shake a tambourine and just about everything else to add to the fun.

It was a very entertaining evening (a long one too; 11.30 p.m. finish) and a fine Cure to a very busy week.

Follow the news and tour dates at the official websites for The Cureheads and  Siouxsie and the Budgies.
Posted by Sean Marsh at 12:52