Freya Ridings is not such a household name as yet - although the ongoing airplay granted to Lost Without You is creating quite a stir. She is, however, one of a rising number of excellent young singer/songwriters who deserve to be much better known. In Freya's case, I am convinced it will not take very much longer at all.

The venue was the basement of a university building. No seats, just one sizable mosh. The temperature started to rise once everyone cornflaked their way forward and it soon became almost uncomfortably hot, especially when people tried to squeeze themselves in front of others where the gaps were merely illusory.

None of that mattered, of course, once Freya Ridings and the band took to the stage. She has presence, style, a remarkable set of songs and, of course, her highly distinctive and powerful voice. 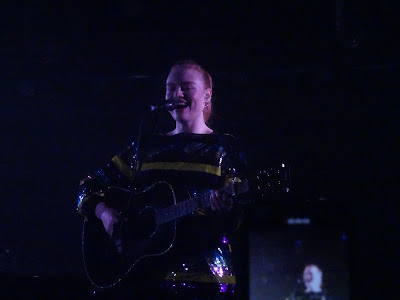 The audience demographic was similar to when I saw Gabrielle Aplin at ULU in October, 2017; I was one of the oldest there too, but by no means the only person over 20.

It is strange to think Freya's debut album has yet to be released; it is due on 31 May. So far there have been a couple of singles and two limited edition live albums, making her new album one of the most highly anticipated of 2019.

The set list is strong but will need more material to grow the show's length by another 30 minutes. Love is Fire proved to be a very powerful opener and the excited crowd was quick to show approval. New single You Mean the World to Me appeared early on. Wishbone and Ultraviolet were standouts too, with the latter ostensibly closing the show - but there was, of course, an encore to come. Now it was really was time for Lost Without You, which was swiftly followed by an excellent Holy Water.

This was her first-ever visit to Newcastle, marking the midpoint if a UK tour that has sold out on every date (14,000 tickets in total). Her reputation is growing and it will not be long before much larger venues are required.

Soon enough she will be playing to audiences far larger than the basement of a university building, but this is precisely the sort of gig that stays in the memory the longest. It will be very interesting to see just how far Freya Ridings can go. 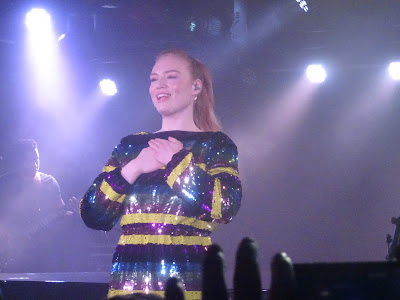 Follow the news and tour dates over at the official Freya Ridings website.
Posted by Sean Marsh at 10:58