Shakin' Stevens was a very welcome visitor to Teesside and another significant addition to Middlesbrough Town Hall's impressive revitalisation. The Specials, UB40 and Adam Ant will all be there before the year is out but last week the spotlight shone firmly on the inimitable Shaky.

He had a lot of success back in the 1980s, when few were still daring to fly the flag for rock 'n' roll, but his fortunes have fluctuated since the days of his prime. Nine years ago he suffered a heart attack but thankfully he made a full recovery. His 2016 album, the introspective Echoes of Our Times, was far removed from his earlier work and offered unusual depth. It formed the core of his repertoire when I saw him on tour two years ago at York's Barbican.

Several strong songs from Echoes of Our Times - including Suffer Little Children, The Fire in her Blood and Last Man Alive have been retained for the current tour, which delivers on its promise to perform all the Greatest Hits...and More! He certainly went through the card for the packed venue, rattling through 26 songs (with a mid-session break). He doesn't dance quite like he used to but certainly well enough for a man who had just turned 71. 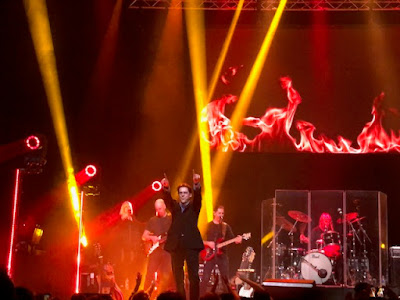 Shaky still has plenty of gravitas when he takes to the stage, despite dressing in a black suit instead of his former trademark denims. Together with a nine-strong band and backdrop videos, this is a real show and it proved to be a real crowd-pleaser. The obvious songs brought the most reaction and dancing and these included Letter to You, You Drive Me Crazy, Marie Marie/Julie (the one segued to the other), Lipstick, Powder and Paint and Green Door. There was still one big-hitter missing as the second half closed and sure enough the encore featured a great version of This Ol' House, followed immediately with the finale of Fire Down Below. There was, however, no sign of Merry Christmas Everyone. 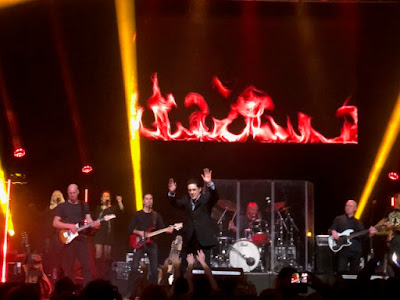 All in all, it was an excellent evening's entertainment.