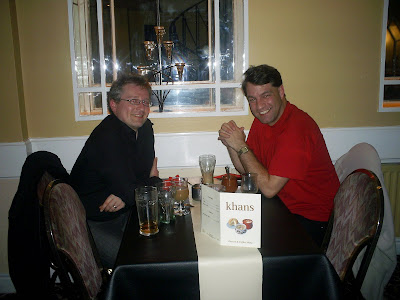 It was great to catch up with Julian Allinson again. We don't meet as often as we'd like (his last blog appearance was almost a year ago: (http://marshtowers.blogspot.com/2008/08/london-again-chess-and-more.html). Indeed, we were never on the same chess team as often we'd liked to have been either but there were two very notable exceptions.

The first was in 1988. Guisborough had the chance to win the league title for the first time in 50 years. Only a 6-0 scoreline in the last fixture of the season would do it. We had a great squad and strength in depth throughout the year.

Julian was back in the area after a short time away and he was ideal choice to play a part in our last match.

It was a nervy, edgy night. The Bishop wasn't much better. We all spent as much time looking at the other games as we did on our own. Julian's game was particularly interesting.

A Traxler Counter-Attack seemed to be doing what it usually did in the hands of Julian; White's King came under a ferocious early attack. It did cost material but that doesn't matter too much in such lines. Unfortunately Julian's further sacrifices, to 'force' mate, didn't go to plan and the White King slipped out of the net. 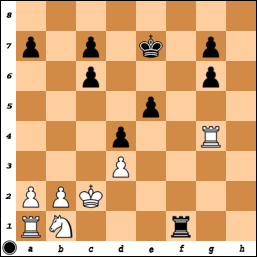 It seems astonishing that Black can turn this around. Yet only a 6-0 would do, and 50 years is a long time to wait. Julian had the hopes of everyone resting on his shoulders. If he resigned then a whole season of hard work would evaporate immediately.

With extraordinary concentration, he somehow managed to claw his way back into the game and create serious counterplay. The nerves of the occasion were felt throughout the room. Opponents are not immune. Mistakes were made...by now, the match score was 5-0 and some Guisborough players paced the room while others allowed their jaws to drop as they watched...

Even now, it is hard to believe, but the game ended in this position: 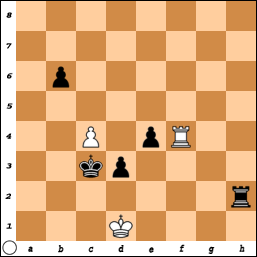 After Black's 48 …Kxc3 White resigned
Fast-forward 10 years. It's my first season with Elmwood and we need to win the final match of the season to take the title. We are playing the only other team who can win the league but it's not quite winner takes all; our 'goal difference' is slightly poorer than theirs so a 3-3 isn't good enough for us.

We are forced to play with a weakened team; a pity after such a close season but rules are rules and can enforced if people so wish.

However, there is a chance...Julian will be in town! He is signed up. A willing warrior, happy to play Black, on board one, in the toughest match of the season. This time it's a Caro-Kann. 10 years can do a lot to a person's opening repertoire. 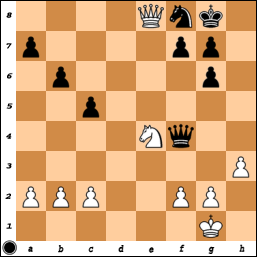 Has White made any progress? A timely Ne4-d6-c8-e7+ might cook the goose of the pinned Knight on f8. Black, however, demonstrates that the potential trouble is an illusion. 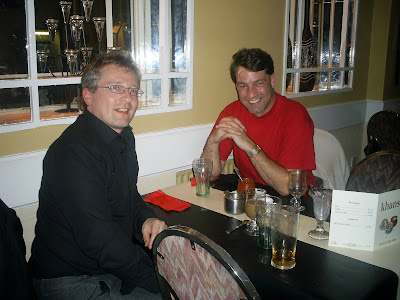