Darlington Football Club is in serious financial trouble. This exhibition match was organised to raise funds and it pitched the Darlington team 1999-2000 against the ‘All Stars’.

Former top referee George Courtney was in charge on the pitch and another former referee, Jeff Winter, acted as MC throughout proceedings.

Before the match started, the crowd of nearly 3,400 was treated to a rousing performance by the band of the First Scottish Guards.

The photos are from a distance and aganst the sun but should be good enough to provide a flavour of the day. 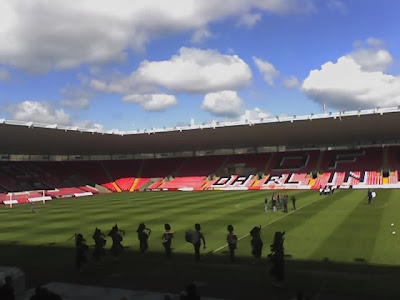 The band in full swing 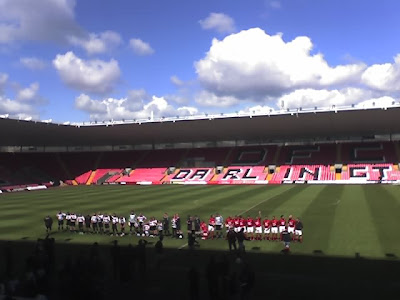 The players line up
Once under way, the ‘All Stars’ dominated the early stages and were soon 2-0 ahead. Darlington looked outclassed but they did manage to grab a goal back shortly before half-time.

Paul Gascoigne was cheered virtually every time he touched the ball and was happy to sign autographs before and after the match. He was full of tricks and mischief; running behind the linesman and pretending to pull down his shorts; bending down to play the ball off his knee; telling the officials he’d ‘…get his Mam on to them’ after a decision had gone against him. He took - and scored - an early penalty after pointing and telling the keeper exactly where he was going to place the ball. 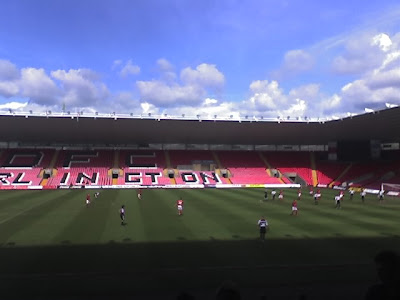 In the black and white, the two nearest players are Bernie Slaven and Dean Windass
He lasted about 70 minutes before being substituted. Jeff Winter immediately interviewed him and congratulated him on his performance. ‘Aye, not bad like for a man whose been sectioned’ replied the irrepressible Gazza. 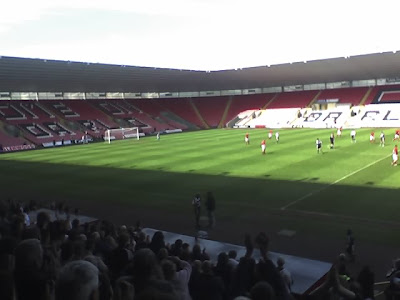 Gazza being interviewed by Jeff Winter
Meanwhile, the ‘All Stars’ were fading and Darlington were scoring goals for fun. They turned the match around and established a commanding 5-2 lead, thanks partly to two good goals by Martin Gray. The ‘All Stars’ had just enough gas in the tank to snaffle a late consolation goal, with Bernie Slaven rolling back the years to produce a magnificent finish for his second goal of the match.

There wasn’t enough time or energy left for a major comeback so the final score was 5-3 to Darlington. 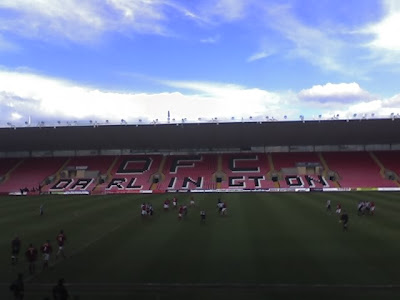 It's all over - possibly in more ways than one
It had been a very entertaining afternoon. The future of the club, alas, remains entirely unclear.
Posted by Sean Marsh at 00:04