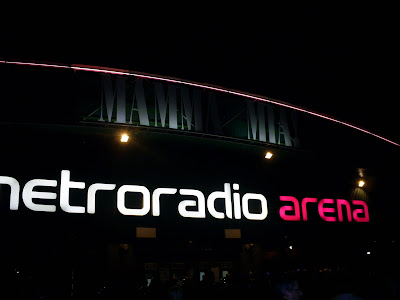 Abba-mania hit Newcastle in January when 'Mamma Mia!' came to town. I was there at the Metro Radio Arena to see the show and find out how it compared to the famous film.

I think everyone knows the basic plot. A girl who is due to be married wants her Father there but she doesn't know who he is. From her Mother's (formerly) secret diary, she narrows it down to three men (as you do) and invites them all. Which one is really the Father? The story unfolds to classic Abba songs (all of which are relevant) and an amazing display of dancing.

There's never a dull moment. It's a big, confident production (and undoubtedly sexist, but in a way nobody complains about; ie: anti-men).

There was a big and noisy audience, most of whom seemed to know all of the songs word for word. I felt it was as good as film but the view wasn't always good, despite having very central seats. Methinks they forgot to add a slope when the seats were installed.

Apart from that, the venue was fine; easy enough to find with good access to refreshments and toilets.

A fun night out - made even better by the excellent Greek yoghurt & Lemon flavoured ice cream.
Posted by Sean Marsh at 01:07