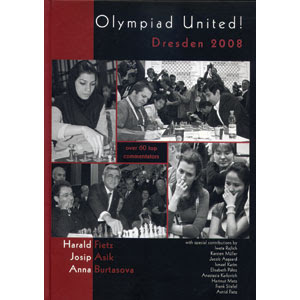 Olympiad United!
Dresden 2008
By Harald Fietz, Josip Asik and Anna Burtasova
304 pages
Verlag Schach Wissen Berlin
In these days of instant new updates and quick fixes of information, it seems a little bit strange to see a new book about an event which took place in 2008. However, once the book is seen, it becomes readily apparent that an enormous amount of work has gone into it, with more than 60 people contributing articles and analysis.

It’s much more than a book about a single event:

‘This book is designed to be in equal measure both a tournament report capturing the heat and the beat of 11 rounds of a Chess Olympiad and also a behind-the-scenes look at what is an international chess circus.’

To that end, in addition to a round-by-round report on the action at Dresden, the book is replete with games (100 have annotations), interviews, photos (over 300!), quotes and chess puzzles.

Needless to say, with the Olympiad featuring so many of the world’s top players, there was plenty of excellent chess on display. Lots of the games are annotated by the players themselves and there are also some guest annotations; for example, the veteran GM Borislav Ivkov has contributed fine notes to two games by his old friend and rival, Viktor Korchnoi.

Naturally, Korchnoi is always a reliable source of anecdotes. There’s a great one here about a woman who tried to get him to sign a book. only to meet with the words ‘Don’t you have anything better do?’ And that was only the start of the trouble...

The entire book has a very upbeat ethos and the personalities of the annotators really shine through.

‘Our objective was to encourage impartiality and allow contributors complete freedom of expression in both content and style.’

This is not just a collection of games. There's a plethora of articles on general aspects of the Olympiad, such as 'Team spirit', 'The captain's role' and 'My most exciting moment'.

There are interviews will luminaries such as Ivkov, Yusupov Nona Gaprindashvili and many others.

The book concludes with a full listing of all the individual results and a final selection of great photos, this time showcasing the entire contributing team.

The whole thing represents an impressive labour of love. The fact that the Olympiad was played ‘as long ago’ as 2008 has no bearing on the amount of entertainment and chess instruction that this book contains. A triumph of style and substance.

Here's a bit of chess for you to try, from the section titled: 'In the shoes of an Olympiad player!' 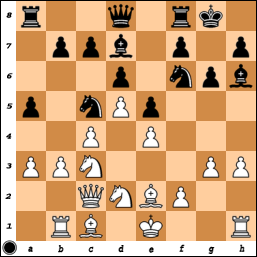 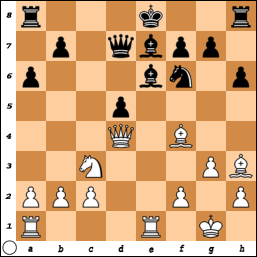 White to play
How bad is Black’s position?

No clues! Just see what you can come up with -
and check your answers when you buy the book

For further details, please go to:

http://marshtowers.blogspot.com/2007/12/chess-review-archive.html
Posted by Sean Marsh at 00:38