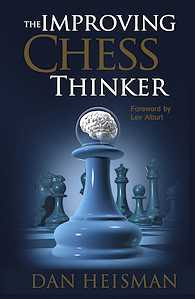 ‘When a club player decides he wants to raise his rating to the next level, he typically looks to improve his middlegame or endgame understanding. Often, however, the true secret to improvement lies not in studying additional chess material but in learning a more powerful thinking process.’

GM Lev Alburt provides the introduction and hails this book as ‘…a significant contribution to the realm of ‘‘scientific’’ chess literature’.

Coming from a Grandmaster who has written plenty of book on chess improvement, that is high praise indeed.

The material is arranged as follows:

11. The Basics of Time Management

12. What the Researcher Learned

1) How do players learn and improve?

2) How do players think during a game?

He presents a series of de Groot test positions (named after Dr. Adriann de Groot, a pioneer in this field back in the 1930s).

This is the first test position: 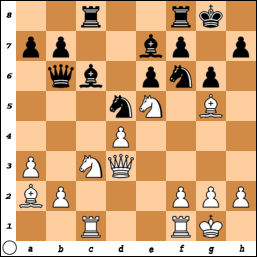 (No further clues or hints are given)

Explicit instructions on how to sue these test positions is given and then the results from various categories of chess player are analysed. These ‘protocols’ (think-out loud exercises) offer a very revealing insight into thought processes of players possessing different ages, chess ratings and how much time they spent on the positions.

It is very interesting to compare the written thoughts of the participants and to see how the approached the position, what they thought was important and what they missed.

The last two chapters are very interesting too. The protocol of the fifth World Champion, Dr. Max Euwe, on the position given above. His thoughts are very instructive as he sifts through the options to find the best move. Finally, Rybka 3 is unleashed - with predictable results.

I don’t want to quote any of the analysis on any of the positions, as it would be too much of a ‘spoiler’ for those who want to buy the book and enjoy the journey.

This book will appeal to all those who would like to thoroughly investigate the thought processes of a chess player’s mind. Coaches will find the material of use too. Players who are not prepared to put in some serious work will probably find it heavy going. It’s a book to be read methodically over a period of time, not a quick fix skimmer. 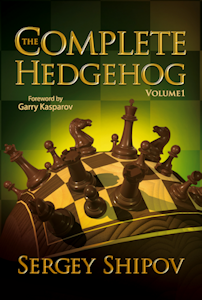 ‘The author meticulously explains strategic themes, typical formations, move-order subtleties, and explores the thorny question: Is the Hedgehog a ‘‘theoretically sound’’ opening - and does that really matter?’

The Hedgehog - in which Black sets up several pawns along his third rank, like little spines - is a fascinating opening. Despite its popularity, there have been comparatively few books devoted to it. Some time ago, GM Suba wrote one (’The Hedgehog’) and included various thoughts about the opening in ‘Dynamic Chess Strategy’, but otherwise the Hedgehog tends to be lumped together with other variations of the English Opening.

This new book makes a bold attempt investigate and explain the mysteries of the intriguing opening.

The foreword is, fittingly, contributed by former World Champion Garry Kasparov, who did so much to enhance the Hedgehog’s reputation.

‘I highly recommend this book because it investigates strategic concepts instead of being limited to mere reactions.’

The contents are arranged thus:

The Hedgehog. It’s Birth and Development

Getting to the Hedgehog Opening Structure

This is definitely not a book crammed with variations and a few bland comments. As the author says:

‘The point of this book is not just to describe the opening phase of the Hedgehog, but also to make a detailed study of the ideas for both sides in the middlegame, using the examples of selected best games.’

The promise of explanations is adhered to, but first there is a little warning from GM Shipov:

‘I should warn my young and impressionable readers that Hedgehog structures can occur only if both sides are willing; so there’s no point in studying the Hedgehog with the aim of making it your principal system for Black, because ‘wicked’ opponents might not allow you to set it up at the board.’

The point is that there are ways to avoid the issue with various move orders. The recommend sequence is: 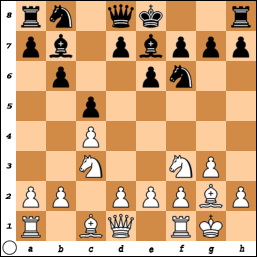 ‘Here it is - have a look! - the English Hedgehog in the flesh. Three black pawns already stand on the sixth rank, soon to be joined by a fourth, on a6. The distinguishing feature of the English form of the beastie is the placement of the white bishop at g2; the e-pawn can be at e2, as well as at e4.’

There’s plenty of eye-catching games to illustrate the successes and failures of the Hedgehog.

GM Ulf Andersson doesn’t play very much these days and for some time had a reputation as a draw-master, but his games in this book should help to change a few opinions. Black often obtains nagging pressure against the c4-pawn. Andersson’s deep plan represents positional planning of the highest order. 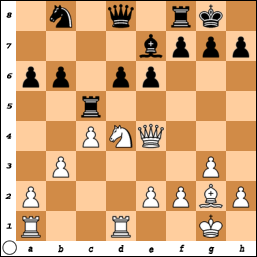 ‘This is not just to nail down the pawn at b6, but to clear an important transit square!’

‘Now, pay close attention to the shuffling of the white pieces. Magic is about to begin.’

‘Where is the white queen going?’

‘The American grandmaster, schooled by the bitter experience of his predecessors, waits. We shall return later to Black’s active choices.’

‘Here it is: Andersson’s patented restructuring. The queen’s most useful spot is not in the center, but in the corner of the board, behind the pawns! White’s pieces protect the c4 square, and free the b3-pawn for active play.’ (1-0, 51)

GM Shipov acknowledges 7 Re1 as a very dangerous threat. ‘I promise you: these will indeed pose great problems for hedgehog!’ There’s certainly some things Black should keep an eye on, such as this… 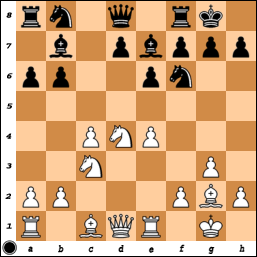 The naïve 10...d6 would be bad because of 11 e5!, when 11...Bxg2 runs into the intermediate capture 12 exf6! The rook, looking ahead to this, has left f1 already, so the bishop would have nothing to take from g2. Thus Black would lose a piece here.’

The index of players is present but I think it could have used a bibliography and an index of variations too.

All in all, it’s a fine work and one of the most interesting chess books of the year. Let’s hope volume two isn’t far behind.

Mongoose Press are doing very well to establish themselves as publisher of fine chess books. Production-wise, the standards are high. For example, the spine on the hedgehog book is sturdy and shows no sign of bending, despite the high page count. The internal layout of both books is easy on the eye and there is a definite impression of time and care being taken.