‘The secret to good defensive play is to avoid falling into a passive defensive position!’

Expressing a little dissatisfaction with the title of the DVD - he never enjoys being on the defensive in his own games - he goes on to say that the purpose of the lessons given here is to help viewers avoid being forced into passive defensive situations.

As usual, he sets a number of test positions in the introduction. These are presented without clues and viewers are encouraged to put some effort in right from the start.

The answers are given after the main lessons, which look at various ways to deal with the following subjects:

The advance of the f-pawn

The weakness of the back rank

The process of elimination

A good demonstrattion of avoiding defensive chores before they even start comes in this impressive game. The big KvK clash in London, 1984, was the first time the big two had started a game with a handshake since the early games of their 1978 World Championship match. Ice may have thawed but Korchnoi had aggressive intentions. 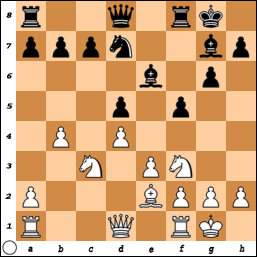 Black is limbering up for a Kingside pawn adavance. At his best, Karpov played with remarkable precision.

13 Re1! Already ensuring that any plan involving ...g5 and ...f4 will automatically open the e-file for the Rook. 13 ...g5 14 Rc1! So calm. The rest of the game will repay further study and it is made more accessible by GM King's lucid explanations.

Sometimes, of course, things are far more serious on the board and desperate measures are called for. Readers may like to try and work out how Black went from this... 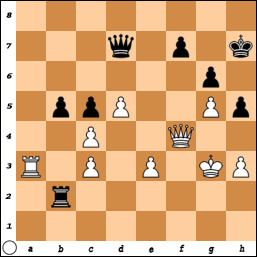 ..to this, in just a few short moves (White missed easy wins). 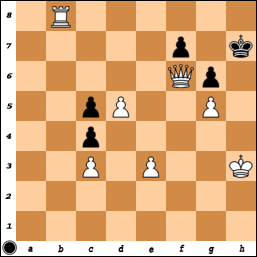 The final 12 videos analyse the test positions and this allows viewers to check their answers.

‘Even in the darkest hour, even in the gloomiest positions, we can sometimes find a miracle defence.’

In the introduction he freely admits that further reading would be required to forge the King’s Indian into a important part of one’s repertoire. He also points out that he has tried to give different lines on the DVD than he did in his recent book on the King’s Indian (I've not seen the book so I can't compare the two).

There’s a lot to cover to successfully present a full Black repertoire and the material is split into the following sections:

The Saemisch Variation with 5 Be3

The Saemisch Variation with 5 Bg5

The Classical Variation with 9 Ne1

The Classical Variation with 9 Nd2

The Classical Variation with 8 Be3

The Fianchetto Variation with d3

The Fianchetto Variation with b3

The Fianchetto Variation, other seventh moves and 8 e4

The Fianchetto Variation with 8 h3

The Fianchetto Variation with 8 d5

The Fianchetto Variation with 8 b3

The Fianchetto Variation without c4

Starting with systems and working through Nge2/Bd3, The Samisch, The Classical and the Fianchetto lines. The last section requires more lectures than all of the others put together due to the desire to offer the King’s Indian as a weapon against the English Opening as well regular d4/c4 set ups.

Of the 21 illustrative games, 19 are Bologan’s own so he clearly knows his material well.

The Saemisch Variation (1 d4 Nf6 2 c4 g6 3 Nc3 Bg7 4 e4 d6 5 f3) is very popular so I was particularly interested to see what he recommended. Would it be the pawn sacrifice after 5 …0-0 6 Be3 c5, which is recommended in various players? No - I was pleasantly surprised to find something different, namely: 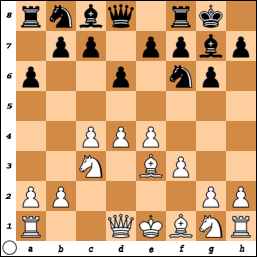 If White keeps the tension instead of pushing d4-d5, Black is advised to exchange on d4 at the right moment and then complete development with …b6,…Bb7 and ...Rc8.

The Classical Variation is complex and requires careful study. Bologan shows how to maintain the balance between keeping a careful eye on White’s Queenside play and pursuing the typical KID Kingside attack. It’s not an easy task, but Black players should be encouraged by the material given here. Sometimes success hangs on an appreciation of a single tempo, won or lost.

For example, in this position… 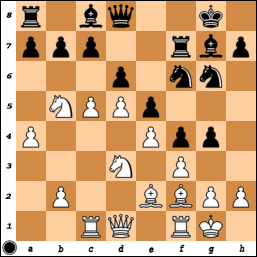 …Bologan draws attention to the fact that he has not had to play …h7-h5 in order to play ..g5-g4, and this enables him to use the vacant h5 square as a springboard for his Knight. After the pawn sacrifice 17 …g3 18 hxg3 fxg3 19 Bxg3 Nh5! 20 Bh2 Bh6! Black’s pieces sprang to life and he won shortly afterwards.

One particular plan of action caught my eye in the Fianchetto section, in which Black’s quest for activity is ably demonstrated. 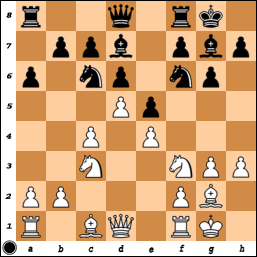 Instead of retreating the Knight, Black heads forwards with 10 …Nd4! 11 Nxd4 exd4 12 Qxd4 Qc8! and now it’s tricky for White to defend the h-pawn. After 13 h4 Ng4, the Black Knight is guaranteed a powerful post at either g4 or e5 (depending where White pushes his f-pawn) and he has ample compensation for the sacrificed pawn.

GM Bologan certainly takes the bull by the horns with his suggested repertoire, heading straight into powerful main lines. This DVD will be of great benefit to KID fans, who will be able to add extra lines to their existing repertoires. KID novices will have to work hard - this is not a quick fix solution to facing 1 d4 - but the hard work will eventually be rewarded with a greater understanding of an important opening. I think the material given here will stand the test of time.

Club players may find GM Bologan’s presentation on the King’s Indian Defence a shade on the heavyweight side. They will feel more comfortable learning a simpler set of openings such as the ones given here.

Starting with 1 e4, there are 16 lectures on The French Defence. The backbone of the repertoire is Romanishin’s 3…Be7. Players of a certain age may remember a short series of articles on 3…Be7 in BH Wood’s old CHESS magazine, although they have now been largely forgotten.

Here, the Bishop move is given against White’s two most popular third moves, 3 Nc3 and 3 Nd2. It is essentially a high-class waiting move, aimed at avoiding a lot of main line theory.

Sometimes the two variations overlap. GM Davies points out that this key position… 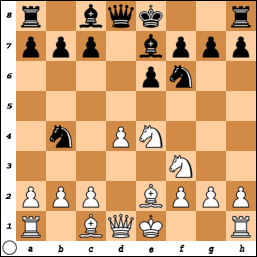 Every part of the repertoire has been selected to be picked up easily. For instance, the positionally well-motivated plan of …Qb6 and …Bb5 is given against the Advance Variation. This is fairly simple to learn and Black will have a clear idea of what he is after.

The French section is followed by five on the Franco-Indian, in which Black plays 1 d4 e6 2 c4 Bb4+

White has three sensible ways to block the check. Transpositions to other lines are possible - in particular, the Bogo-Indian, which is covered also.

Quirky little lines are given to try against The Catalan, The Colle System, The Torre Attack and The London System. These are brief but interesting. One of them is: 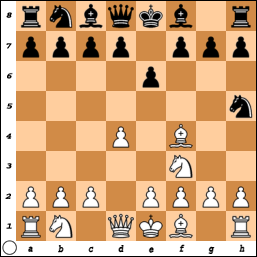 …which I’ve never seen before and I think that will go for most viewers.

Summing up, this DVD would suit club players looking for a sound Black repertoire which keeps away from well-trodden main lines. The explanations are kept simple and the variations are light, thus facilitating speedy absorption of the given lines.