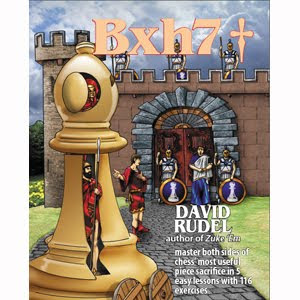 In his introduction, David offers some remarkable advice: ‘If a Colle-System reader happens to have bought this book by accident, I recommend he immediately put it on e-bay and grab a copy of The Moment of Zuke instead.’

The point is that The Moment of Zuke contains a fair amount of Greek Gift material and he is concerned that the reader will suffer from the duplication of material.

I think he is being rather too hard on this new book, which, to my mind, stands on its own two feet and provides an excellent survey of the whole Bxh7+ scenario.

The material is split into two parts.

A ‘blundersault’ is a strong assault by White, made possible by a Black blunder.

After running through some basic relevant points, the author presents 20 exercises for the reader to solve. The question: is Black safe in each position? If Black isn’t safe, the reader is required to point out the best line for White.

The French Advance doesn’t relate just to 1 e4 e6 2 d4 d5 3 e5, but to all positions after 1 e4 e6 where White goes on to advance the e-pawn a step further. 12 more exercises are included here.

It’s good to see a section on the sacrifice of both Bishops. 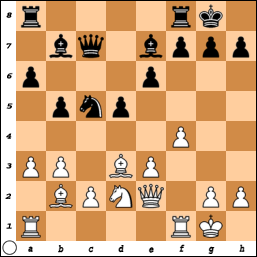 This module looks specifically at the options granted by a White Knight posted on e5. It creates extra threats, such as linking up with the Queen (after Qh5+) to attack the f7-square. 16 exercises on the ‘is Black safe’ theme test the student’s skill and judgement.

Sometimes the Knight doesn’t even need the help of the Queen. 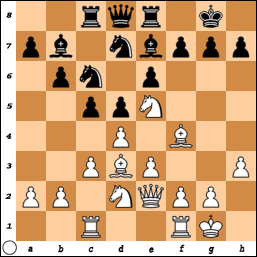 ‘Enough with the appetizers and side dishes! The meat is here.’

Prior to impressive collection of 56 exercises, David gives 17 pages of battle plans advising the reader on the exact circumstances required to give the Greek Gift the best chance of creating a winning attack. Black’s reactions are covered in depth; after Bxh7+ Kxh7 he can, in most cases, try and retreat with …Kg8 or advance with either …Kh6 or ….Kg6. The reader should feel growing confidence with each nugget of information.

Finally, it is into action with the last set of exercises. Bxh7+ was played in each one of the 56 games but the reader has to analyse carefully to see if it was successful or not.

This is a very well written account on the exciting world of Bxh7+. It won’t just be Colle players who find it useful; the possibility of the Greek Gift crops up in various openings. The book can also be used as a manual to improve one’s calculating skills.

Here’s one to try… 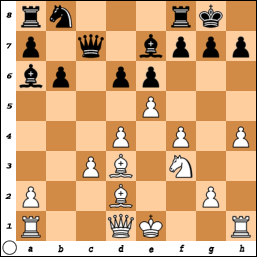 Continuing the tradition of single volumes providing all-embracing opening coverage, this is a big book; a real hand filler.

There are three main sections. 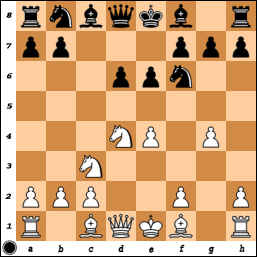 ‘Few variations have had such an impact on the Sicilian Defence as this move. Instead of first developing his pieces and then looking around for a good plan, White immediately attacks, boldly and unreservedly. It took a long time for the chess world to grasp the enormous strength and significance of this idea, for it was not until around 1980 that this became a popular line (some forty years after its introduction). But when it did finally sink in, its effects were felt in even the remotest corner of the Sicilian. Many new variations, based on the advance g4, were developed (like the English Attack against the Najdorf) and lovers of the Scheveningen saw their wide, safe and comfortable avenue change into a narrow and dangerous mountain trail.’

Every opening receives the same sort of treatment. There are historical snippets too, which help to bring the subjects to life. Even Benoni players may be surprised to learn that…

‘The name Benoni is somewhat ominous, for it is Hebrew for ‘child of sorrow’. far from being a cry of despair by a player who has just lost his third game in a row with this opening, however, the name is the result of a bizarre little twist of history. ‘Ben-oni’ is the first word of a much longer title of a general book on chess openings which was published in 1825. Among many other things, this book dealt with the consequences of 1 d4 c5. For some totally obscure reason the word Benoni then got stuck to this particular opening…’

This is not intended as a stand-alone volume, as the author explains:

‘If it has the effect on the reader that it whets his appetite for these ‘usual’ opening books, or at least makes him understand them a little better, this book will have fulfilled its purpose.’

It’s an admirable ethos and one which I’m sure club players will appreciate as they have an excellent opportunity to learn the strategies and plans behind the openings rather than merely learn large chunks of apparently motiveless moves.

One Minute to Mate

For the uninitiated, ‘bullet chess’ refers to one-minute games played over the internet. It can be an addictive way of playing, especially as one can see one’s rating ascend and descend with alarming rapidity.

In the introduction, GM Seirawan relates the tale of GM Christiansen being upset with himself after losing a ‘bullet’ game on his laptop and inadvertently causing $200 worth of damage after slamming his hand into it.

This is the first book I’ve seen that is devoted to this form of chess. Bullet chess is a great leveller. The chess aspect is reduced enough for club players to beat Grandmasters on occasion, even if it’s just on time with a single pawn remaining amid a smoking ruin of a position.

GM Nakamura is one of the finest ‘bullet’ players in the world and here he teams up with Bruce Harper to offer general advice and a few specific pointers on how to be more successful with one minute on the clock.

‘Playing bullet chess is like eating potato chips. Both can be hard to stop, and for some of the same reasons. Both are fun, and there is always room (or time) for one more. But, as with so many things, it’s important to know when to stop.’

Advice is given on a range of subjects including which opening strategies to try, when it is best to use ‘premoves’, how to handle the time factor and, perhaps most important of all, knowing when to stop.

‘Bullet’ openings can be weird, if not always wonderful. It is essential to keep in mind that in one-minute games, time is a massive factor on the outcome. In this example, Black played his first five moves extremely quickly... 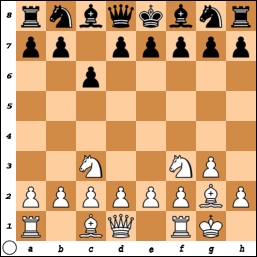 …and gained a seven-second advantage on the clock.

Special ‘bullet’ techniques are present in all phases of the game. Knowing when to simplify is a point-winning method in itself. As the authors point out, even trading to a dead lost ending can win the game, as endgames generally take more time and moves to win than a middlegame. Losing on time with a clearly winning position doesn’t bring much sympathy in the world of ‘bullet’ chess - and even fewer rating points.

On the other hand, ‘book’ draws can still end in victories. 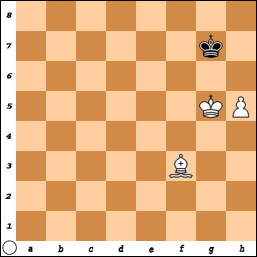 This is, of course, a dead draw as White cannot force the Black King away from the corner. However, if Black runs out of time, he loses. Not many ‘bullet’ players with automatically offer a draw in White’s shoes!

This book will have a limited appeal but it’s an entertaining read, virtually guaranteed to help you win more ‘bullet’ games.

Improving Calculation And Resourcefulness in the Endgame

In his thoughtful foreword, GM Jan Timman, says: ‘Among the various endgame study books that I have read, ‘Studies for Practical Players’ is one of my favourites’.

Coming from a specialist in chess studies this recommendation must be taken seriously.

‘How do we develop habits of endgame play? There are lots of manuals, but this may be the first in which a famous practical player, a trainer with a world-renowned name, and a study composer with an International Grandmaster of Composition’s title share their views in one and the same book.’

The book is split into four main parts.

This contains two chapters. Mark Dvoretsky displays ‘Studies From My Notebook’ and Oleg Pervakov presents the winning entries from the composing tournament which was created to honour his co-author’s 60th birthday.

This part consists of two chapters by Pervakov.

Using this classic as his starting point, he slowly builds up to much harder studies. 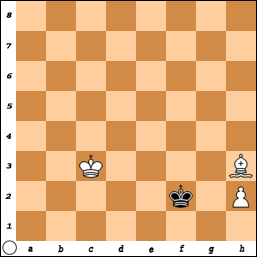 This part is all Dvoretsky’s work. He gives a chapter based on the studies of Wotawa and another on one of his favourite themes: the playing out of studies with a coach or training partner.

‘…chessplayers spend almost all their free time preparing openings, and never train the vitally important technique of calculating variations - this is the technique that lags behind, for them. Regular training in solving and playing out studies is a good recipe for eliminating that shortcoming.’

He discusses the best way to go about it and provides numerous suitable positions. It’s the sort of thing we all should be doing. I’m sure a lot of players get together with the intention training in this way but end up playing ‘bullet’ chess instead.

Part 4: From Steinitz to Morozevich

The final part sees Pervakov presenting a wonderful selection of studies composed by some of the strongest players in history.

‘Freed from the need to acquire the next point, or the next title, players do not mind ‘easing off the gas’, and giving free rein to their fantasy. Moving the pieces about in such studies, your fingertips feel an almost childish glee at the clever people who decided to ‘go gangsta’ - in this case, at the chessboard.’

This is one of the simplest, which should serve a clear indication of the level one should expect to find. 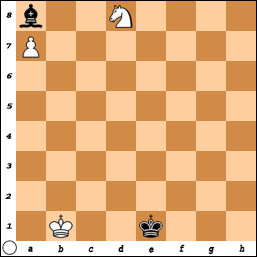 Can you find White’s narrow path to victory? The critical line lasts 10 moves and only the Kings are used!

As usual with Dvoretsky books, this is not for the lazy. Timman recommends that readers take their time with the material, and of course he is right.

This is a fine book and it should provide many hours of entertainment and instruction.

For more information regarding Thinkers' Press, please go to:

http://marshtowers.blogspot.com/2007/12/chess-review-archive.html
Posted by Sean Marsh at 00:24