Book Review: Abbott and Costello on the Home Front 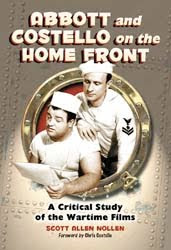 Abbott and Costello on the Home Front

A Critical Study of the Wartime Films

Over the course of 15 chapters, film historian Scott Allen Nollen sets out his chronological analysis of the wartime films of one of the world’s greatest comedy double acts.

The story starts with the earliest days of William Alexander Abbott and Louis Francis Cristillo - Bud Abbot and Lou Costello - and their occasional spells working with each other.

Announcing their partnership in 1937, (with Bud securing a 60-40 favourable split of the money), the duo gradually earned a radio spot. 10 minutes earned them $350. Within two months, their famous Who’s on First sketch catapulted them to considerable heights. By 1940, they were earning $1,250 per week just from their radio performances.

A film career was sure to follow and they were confident enough to turn down MGM in favour of a better deal from Universal. The timing could not have been better.

‘The practice of using the cinema as a nationalistic propaganda tool is as old as the medium itself’.

Thus 1941’s Buck Privates, making $4.7 million (beaten only by Gone With the Wind), catapulted them into silver screen stardom, with an initial four-year contract earning them $50,000 per picture plus 10% of the profits.

Success breeds success and the boys were back almost at once with In The Navy swiftly followed by Keep ‘Em Flying. After that, they were on a conveyor belt of feel good films, although the hectic pace inevitably led to peaks and troughs as far as quality was concerned.

The author examines no fewer than 18 wartime films, with enough plot summaries, quoted dialogue and background information to satisfy even the expert readers.

Despite the author’s obvious affection for his subject, this is not a total whitewash and the balance is maintained by some darker observations.

The life of the Costello family was never the same after the accidental death of Lou junior, just two days short of his first birthday party.

Lou survived serious health problems. Rheumatic heart disease struck in 1943, and there were real fears that he would never work again.

Later on, a dispute over a maid, fired by Lou and subsequently hired by Bud, led to a period of non-communication outside of work and very nearly resulted in a costly split.

Other anecdotes flesh out their characters, such as Lou’s habit of taking major props away from the set for his home. As this was often done before filming had finished, retakes were required at great expense. An arrangement was stuck - Lou temporarily ‘lent’ back the props but could take them home again after shooting had finished.

The final chapter, Cold War Monsters, documents the post war films in which they took on all comers from the Keystone Kops to the Mummy.

McFarland’s high production values are well to the fore. The book is enhanced by an excellent selection of photographs, some depicting outtakes from the films, and reproductions of the cinema posters.

Other extras include a foreword by Chris Costello - focusing on the charitable work of both her father and Bud - an appendix giving the cast details of all of their feature films, a bibliography and a full index.

Nearly 70 years on, the films of Abbott and Costello are still enjoyable. They stuck admirably to the advice given by a member of the United Service Organisation, namely: ‘The men you’re playing to don’t need pep talks. They’ll do the fighting. You do the entertaining.’

Thanks for this review! I loved Abbot & Costello movies when I was a kid. I am going to have to check this out.

Glad you enjoyed it!

There are plenty more reviews in the pipeline and I'm increasing the number of non-chess considerably.