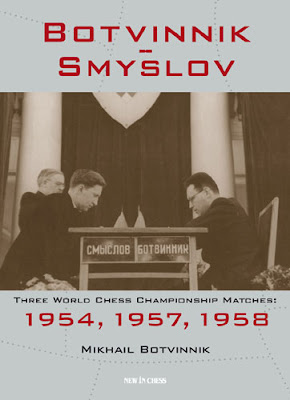 Botvinnik - Smyslov
Three World Championship Matches: 1954, 1957, 1958
By GM Mikhail Botvinnik
287 pages
New in Chess
Botvinnik’s title matches with Bronstein and Tal have perhaps received more coverage than those with Smyslov; the battle of opposites being more cosmetically memorable. However, the three World Championship bouts between Botvinnik and Smyslov saw an abundance of fighting chess.

Therefore it is great to see this new compendium of Botvinnik - Smyslov matches, especially as the notes are by Botvinnik himself.

The matches were surprisingly bloodthirsty.

In 1954, Botvinnik won three and drew one of the first four games but Smyslov hit back strongly. The middle of the match brought an amazing run of eight consecutive decisive results. Smyslov finished the stronger of the two but despite two late wins he couldn’t wrest the title from Botvinnik’s grip. Just as in 1951, the champion retained his title with a 12-12 draw.

Smyslov’s strength of character was amply demonstrated when he battled through the pack to become the challenger again. This time he achieved his aim with a convincing 12.5-9.5 victory.

Botvinnik came out fighting in the rematch the following year; three wins from the first three games (two as Black with the Caro-Kann) set him up for an eventual 12.5-10.5 match win. (Incidentally, the result table in the book erroneously marks game 23 as a win for Botvinnik when in fact it was drawn.)

Every game is annotated by Botvinnik, with just a very small number of exceptions (in which Smyslov and Flohr prove worthy substitutes). The main notes are augmented by the addition of Botvinnik’s secret notebooks featuring his opening preparation. Such preparation was a major weapon in Botvinnik’s armoury (skill in that department could offer a big advantage in pre-ChessBase days) but Smyslov was no slouch either. The battlefield over the course of the three matches covered terrain from the French, Sicilian and Ruy Lopez to heavyweight battles in the Grunfeld and King’s Indian, with plenty of others in between. Fans of such openings will find plenty of interest, despite the age of the games.

Given Botvinnik’s scientific approach to chess and life, it comes as a surprise when his very human side is displayed.

His competitive nature is revealed in a note before the first move of the first match game is given. Admitting that Smyslov held the advantage in wins over the three matches (+18, -17, = 34) he goes on to comment: ‘However, when it came to World Championship laurels, I was ahead (2:1), because in the event of a drawn match, the World Champion retained his title’.

More than once he labels a variation ‘Rubbish!’ in his (formerly) secret notebooks.

There’s also an occasional reminder of a suspicious mind at work. 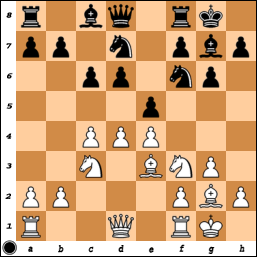 Botvinnik - Smyslov Game 14, 1954
9...Ng4 10 Bg5 Qb6 11 h3 exd4!
‘My opponent played the last three moves immediately, about which I could not hide my surprise. It is certainly rather surprising that Smyslov should have been so well prepared in all the subtleties of a variation that I had never played before, except in training games…’ 0-1 (33)

A hint of foul play?

Elsewhere, he is amazingly honest about his faults and failings. Here’s a startling example: 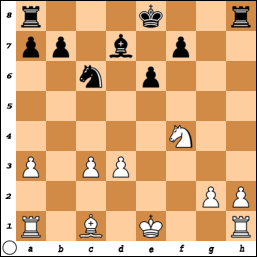 Indeed, the King had participated in an early Queen exchange and then returned to his home square. I’m sure we’ve all done similar things in our games but it’s not often that a World Champion pleads guilty to such basic error during his thought processes.

The translation is by Ken Neat, who has added some corrections and other observations.

There are two forewords; one by Smyslov and the other by Igor Botvinnik (the World Champion’s nephew).

A 13 page article draws from Botvinnik his own ‘Conclusions from the return match’.

Botvinnik’s annotations have always enjoyed universal praise. Having a book full of ‘new’ notes adds up to a valuable addition to the literature of World Championship chess. 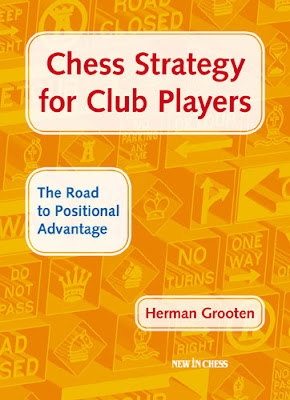 Chess Strategy for Club Players
The Road to Positional Advantage
By IM Herman Grooten
412 pages
New in Chess
IM Grooten has many years of experience as a coach and numerous strong, young Dutch players have benefited from his lessons, including Grandmasters van Wely and Jan Werle.

In the ‘Foreword’ GM Jan Timman says: ‘Herman Grooten has considerably modernized and updated the work of Steinitz. Later developments are also investigated and given a place in this extensive survey of chess strategy. With his great experience as a trainer, he manages to display educational insights that can help the reader increase his playing strength.’

Steinitz’s elements form the bedrock of the book. Their utilisation in the modern game is demonstrated via 25 interesting chapters, dealing with subjects such as ‘Thought process and line of thinking’, Strong and weak squares’, ‘The pawn islands theory’ and ‘Harmony and coordination’.

As the subject matter is mainly of a strategic rather than a tactical nature, lines of analysis are kept to a minimum and the onus is on prose annotations. These are very welcome and the author has clearly put a lot of effort into this book. It’s been written rather cobbled together. Indeed, the word count is considerable; IM Grooten doesn’t like to let things go unexplained.

Occasionally, an eccentric statement appears, such as this one: ‘Almost all the players in the world have once in their career availed themselves of the Evans Gambit.’

However, the vast majority of the material is far more erudite and the depth is very impressive, with lucidity and thoroughness going hand in hand.

Here’s an example, from the chapter ‘The Bishop Pair’. 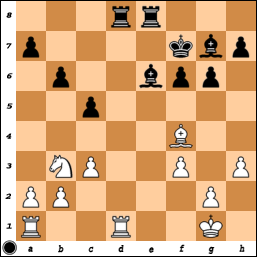 English - Steinitz London 1883
‘Studying this position, we see the following:

Black has the bishop pair, of which especially his light-squared bishop is strong;

There are pawns in both wings, which is to the advantage of the side with the two bishops. Moreover, there ate no fixed pawns;

The white knight is badly positioned.

These factors mean that Black is clearly better, if not winning here. His plan consists of the following stages:

Stage I: By putting his pawns on dark squares, the white bishop, which was reasonably active until now, is restricted in its mobility. This has already taken place on the queenside (pawns on a7, b6 and c5), and on the kingside Black will strive for a set-up with pawns on h6, g5 and f4.

Stage II: At a convenient moment Black will exchange a rook - preferably two.

Stage III: By means of an action on the queenside with …a7-a5-a4 he threatens to attack the white pawn formation - especially the strong point c3. White will then be forced to play Nb3-c1, followed by a2-a3, creating even more weaknesses on the light squares.

Stage IV: Black can then dominate the knight with …Be6-c4 and (after a double rook exchange) prepare a possible king march to the queenside. He also has the breaking possibility of …b6-b5-b4, with which he can extend the diagonals for his bishops.’

This is not only helpful for self-improvement; coaches will also find inspirational material to adapt for future lessons. A good demonstration can be found in the chapter called ‘Training experiment’. 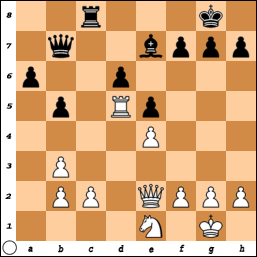 J. Polgar - Anand Wijk aan Zee 1998
GM Polgar won this game in very good positional style. IM Grooten used this position as an exercise for four of his pupils. They traded moves via email and the continuations of all four games are given in the book and it all makes very interesting reading.

The reader is presented with a plethora of exercises too. Here’s one for you to try, from the chapter on ‘Space advantage’. 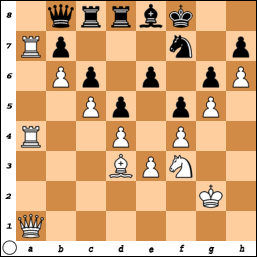 ‘White has an enormous space advantage. How can he make progress? Indicate a plan for White and, if possible, also a variation.’

Hard work is required to derive the maximum benefit from the lessons of IM Grooten. However, such effort will surely be well rewarded. Serious students should certainly be able to discern a distinct improvement in the strategic understanding as they absorb the detailed information provided.

Missed a review? Please visit my archive:
http://marshtowers.blogspot.com/2007/12/chess-review-archive.html
Posted by Sean Marsh at 00:09