The Amazing Chess Adventures of Baron Munchausen
By FM Amatzia Avni
235 pages
Mongoose Press
I have to declare an interest here; I was the editor of this book so rather than write a full review, it's probably best to quote the information given on the Mongoose Press website:
'The legendary Baron Munchausen was famous for telling incredible stories about his astounding happenings and astonishing feats. Munchausen was both a fearless, bold adventurer and a fun, inspiring companion.
Now, imagine the Baron playing chess!
This book presents a series of extraordinary chess tales, describing Munchausen's captivating chess adventures, as told by the great Baron to Amatzia Avni, his diligent biographer. Prepare to be amazed as the Baron engages in chess battles with a range of extraordinary creatures and characters, some of them - quite literally - out of this world!
The reader will accompany Munchausen to Heaven and to Hell; watch him play on a full board and on half a board; in simultaneous exhibitions, Internet and live chess; battling on land, sea and in the air; outsmarting a Cyclops; conversing with a talking horse and much more.
The Amazing Chess Adventures of Baron Munchausen is a compendium of the very best episodes first seen in the British periodical CHESS Monthly, together with a plethora of previously unpublished tales. Instructive, entertaining and sometimes simply baffling, the Baron's adventures are guaranteed to enrich the chess lives of all chess fans.
About the Author
Amatzia Avni is an Israeli psychologist, specializing in the fields of training and personnel selection. He holds the FIDE Master title in both over-the-board chess and composition.
A former editor of the Israeli chess Magazine Schahmat and a frequent contributor to various chess magazines and websites, the author has written a number of original, thought-provoking and entertaining chess books, including Creative Chess (1991, 1997) and The Grandmaster's Mind (2004).'
Readers of CHESS Magazine may recall some early adventures of the Baron. The best of those are included in this volume together with a plethora of new ones. Witty, instructive and entertaining, this boom puts the fun back into chess. It is enhanced by beautiful colour pictures of the Baron and his friends, by Elite Avni-Sharon. The book is beautifully produced and can be enjoyed by players of all strengths.

Chess Camp
Volume 4
Elementary Endgames
By Igor Sukhin
114 pages
Mongoose Press
The first three volumes of Igor Sukhin's ongoing series were reviewed earlier this year. I have used the puzzles extensively during junior coaching sessions and I can confirm how useful they are.
It's not just me who finds them ideal for coaching purposes; as the strapline on the new covers confirms, Chess Camp is now '...the official beginner's puzzle book series of the USCF' ('United States Chess Federation').
The format of the new volumes is the same as the others, with six puzzles on each page and very few clues. The strength is in the simplicity; the puzzles on each page are all very closely linked and often there's just a slight change in the placement of the pieces, making it perfect material to set up on a demonstration board, where a quick change helps to keep disruption at bay!
The material is arranged in three main sections:
Endgames with Three Pieces
Endgames with Four Pieces
King + Two Pieces vs. King
Here's an example for you to try. 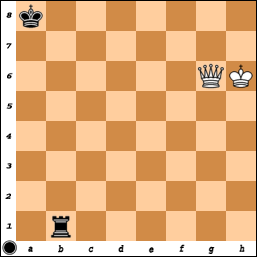 Black to play
Make a draw

Chess Camp
Volume 5
Two-Move Checkmates
By Igor Sukhin
116 pages
Mongoose Press
The title is self-explanatory and the checkmates are split into two convenient categories:
Checkmates in Two without a Sacrifice
Checkmate in Two with a Sacrifice
The earlier volumes had lots of checkmate in one puzzles, which proved very popular around the schools. I'm looking forward to testing out these tougher ones on my travels.
It can take a while for Primary School children to grasp the benefits of a sacrifice, so the puzzles in the second category should be quite challenging.
This sample should give an indication of the level of material. 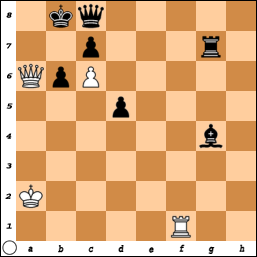 White to play
Mate in two
Two more volumes are due in March 2012, namely Tactics in Attack and Defense and Opening Tactics
All three of the new Mongoose books are very attractively produced, featuring sturdy hardback bindings.
Posted by Sean Marsh at 04:03