As mentioned yesterday, my final few reviews of the year will have to be kept short and will be limited to a brief overview of the latest releases.
In my opinion, 2011 started quietly in terms of good chess books but it is certainly going out with a bang. The three considered here are all fine works and, unusually, they help to provide a review column completely free of products about chess openings. 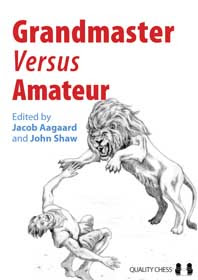 Grandmaster versus Amateur
Edited by GM Jacob Aagaard and GM John Shaw
196 pages
Quality Chess
I was expecting this to be in the format of Question & Answer, with a Grandmaster guiding an amateur through top-level games, just as it was in the well-known book by Max Euwe and Walter Meiden, called Chess Master vs. Chess Amateur.
It turned out to be something quite different. Seven Grandmasters present some of their memorable experiences against lower rated opposition and explain how GMs are able to outwit lesser mortals. To keep things balanced, there are also some examples of the worms turning.

The stories are told over the course of eight chapters:

Jacob Aagaard - Danes Eat Fish for Breakfast
Peter Heine-Nielsen - A Tale of Three Stories
Pavel Eljanov - From Amateur to 2700
John Shaw - From 1700 to Grandmaster - and Back
Boris Avrukh - The Good, the Bad and the Ugly
Tiger Hillarp Persson - The Ulysses Effect
Mihail Marin - It's an Amateur's World
Jacob Aagaard - Fish Eat Danes for Supper

There's plenty of wit to go with the wisdom. It makes for a very refreshing read; it's not so often that one can read really honest thoughts from Grandmasters. 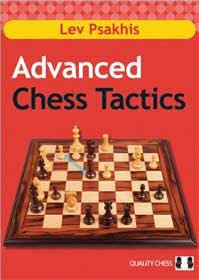 Advanced Chess Tactics
By GM Lev Psakhis
365 pages
Quality Chess
The focus of the advanced chess tactics in question falls firmly on the art of attack as GM Psakhis brings a lifetime of top-flight experience into this packed and entertaining book.

Aimed at players all the way from 2000 to 2600, the material is tough but worthy of the reader's time.

The chapter headings clearly indicate what to expect:

Psakhis's own games are prominent throughout, but there are plenty of fine attacking examples from other players too. Tal fans will not be disappointed. 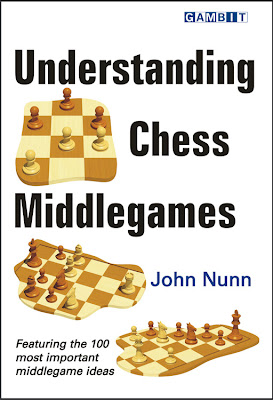 Understanding Chess Middlegames
By GM John Nunn
240 pages
Gambit Publications
The basic premise of this book is similar to the one seen in Understanding Chess Endgames. 100 important themes are presented from various stages of the middlegame, each one enjoying two pages of detailed coverage.

Each theme is conveyed via a pair of annotated games (or parts games, depending on whether or not the opening moves are relevant).

A brace of opening essays, 'Myths of the Middlegame' and 'Interconnectedness' provide some background and context to the middlegame in general before the book moves on to the main material, which is split into the following categories:

John Nunn is one of our most experienced and respected chess authors and this volume is easily up to his normal standard. 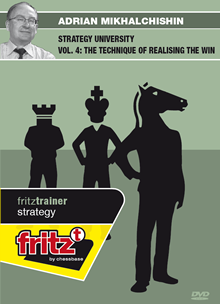 Strategy University Vol. 4:
The Technique of Realising the Win
by GM Adrian Mikhalchishin
Four hours and 37 minutes
ChessBase
There are to types of advantage: material and positional. This DVD, by a very experienced trainer, looks at ways to convert such advantages and how to learn from cases where the attempt at realisation was faulty.

Essentially, this is a series of lectures on how to win winning positions, a problem that even very strong GMs still struggle with. The presenter offers practical solutions to the problem, whether it be the middlegame or the endgame. The illustrative games feature some of the real giants of chess, such as Botvinnik, Korchnoi and Spassky.
A lot of the advice boils down to appeal for more prophylactic thinking (a favourite of GM Mikhalchishin). Experienced tournament players will benefit most from the material on offer here. Casual and club players may find the heavily accented delivery a shade on the hard going side of things.
The final part of this round-up of recent releases should follow tomorrow, after which the chess reviews will take a little rest until the New Year.
Posted by Sean Marsh at 09:32