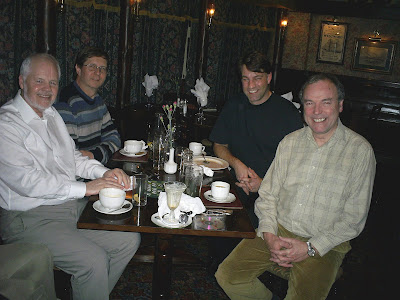 FNS, DW, SM, RVMH. The chess board on the table suggests a nice square meal
The great Howard Staunton didn't think very much of Saltburn. He was present at the Redcar tournament of 1866 and commented:

'The excursions promised to places of interest in the neighbourhood, consisted of a trip to Saltburn, where everybody paid for himself, and could hardly get anything worth having even upon those independent terms.’

‘The shortcomings in question we are willing to believe the result of inexperience on the part of the Managing Committee, and we are quite sure they will not occur at any future Meeting of the Association.’

However, when four former Cleveland County champions (who, curiously, despite many decades of friendly rivalry, have yet to all play on the same team at the same time) dined there last week (at The Ship Inn, to be precise), there seemed to have been a big improvement since Staunton's time and we are sure to ignore his advice and return in the near future.

If only Howard Staunton had said nice things, there could well have been a blue plaque in his honour by the sea in East Cleveland.
Posted by Sean Marsh at 01:02