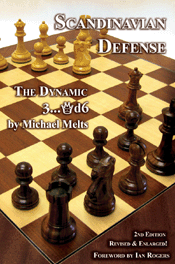 Scandinavian Defense: The Dynamic 3…Qd6
Second Edition: Revised and Enlarged!
By Michael Melts
301 pages
Russell Enterprises
‘Novice and Intermediate players found it easy to learn and understand, while powerful grandmasters such as Sergei Tiviakov realized it was an excellent line in which Black could play fearlessly - and soundly - for a win.’

GM Ian Rogers provides a new foreword (his 2001 foreword for the first edition is included also).
The first time I saw 1 e4 d5 2 exd5 Qxd5 3 Nc3 Qd6 was in simultaneous display by GM David Bronstein in the mid-1990s. (He was quite happy to give players the choice of colour.) I was impressed by the way he built up perfectly viable positions with Black and how his Queen - far from being a target - actually appeared to coordinate very nicely with the rest of his forces.

I tried to find out more about 3...Qd6 but the books were more or less silent on the matter.

Several years later, a book appeared offering comprehensive coverage and it has now been revised and enlarged.

The introduction tells of William Norwood Potter, the first adherent of 3...Qd6 and, according to Lasker, an influence on Steinitz.

The main material is broken down into six main section:

There are 40 main games and many more game snippets are included in the notes.

It‘s rather off-putting to see variations labelled as ‘B3b2a’ and ‘C2b2b1’ and this highlights one of the problems the reader is faced with. To play such a rare line, one would expect to have to get to know a few key lines and understand some model positions, but here a lot more effort is required.

When they appear, the simple prose explanations make a more palatable impression, but these are confined mainly to part 1. 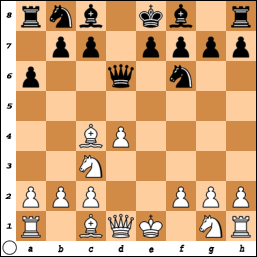 ‘The move 5...a6 looks a bit extravagant. What is the reason for moving the a-pawn?

Although top-level players such as Tiviakov, Nisipeanu and Dreev have dabbled with 3…Qd6, I feel that it lacks a consistent hero to make it more appealing to the masses.

David Bronstein was already 71 when he played this instructive game: 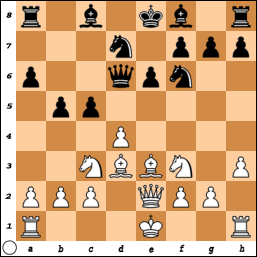 Wood - Bronstein
Hastings Masters 1995
This position illustrates some of Black’s aims and comes from one of the main annotated games in the book.

GM Tiviakov has had some good results with it; for example, he drew an interesting encounter with the current World Champion. 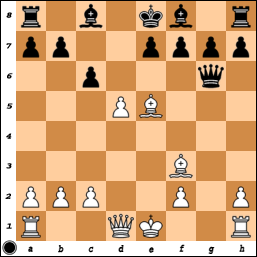 There’s a good index of games and another for variations. The bibliography is extensive and shows over 40 sources, impressively ranging from Land and Water (an early London magazine) to recent New in Chess Yearbooks.

However, adding this line to your repertoire could prove to be a case of ‘all or nothing’; to make the most of the material offered here, one would have to devote considerable attention and effort.

For those prepare to take the plunge, there’s no doubt that this is a deep and very thorough work which is very unlikely to be surpassed as the ultimate reference work on 3...Qd6.

246 pages each
New in Chess

New in Chess Yearbooks appear four times each year. The format is a settled one and each volume follows a familiar structue.

This provides all readers with an opportunity to respond to anything from previous Yearbooks. The correspondence comes from all over the world, with titled players and top authors freely joining in the debate.

GM Sosonko’s regular column is a good read and offer good advice, such as ‘Don’t Panic’ when faced with something new in the opening. That is the subject of his article in Yearbook 89.

The real meat of the Yearbook is obviously to be found in this section. There is typically a prose introduction followed by a selection of very recent top-level games, complete with deep annotations (using symbols rather than words in the vast majority of cases). There’s good use of photos too, one per survey and most of which were new to me.

32 opening lines are covered in volume 89 and 33 in volume 90. Highlights from the former include ‘The Variation That Decided The World Championship’, in which Peter Lukacs and Laszlo Hazai take a good look at this key position from the Semi-Slav. 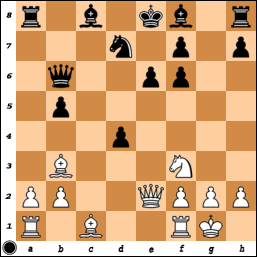 ‘It is advisable for the authors to be extremely modest in evaluating this line. As we see, even World Champions find it very difficult over the board. Good computers, good analytical programs and a lot of time and energy may help, but only effective over-the-board calculation may lead to success here.’

Viktor Moskalenko provides two entertaining surveys on The Budapest Defence as updates to his book on the subject.

‘We can observe an increase in the Budapest Gambit’s popularity and its theory keeps growing. If you are not prepared, you are in danger no matter your level! A good example is the recent game Kramnik-Mamedyarov.’ 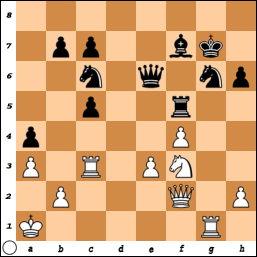 From volume 90, GM Eingorn’s survey on 7...Kf8 in the Winawer and Nikolay Ninov’s analysis of the Traxler Gambit are particularly interesting. 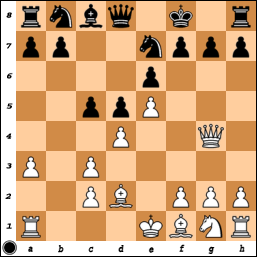 ‘In contrast to the classical continuations 7...Qc7 and 7...0-0, Black’s strategy here is based on a completely different logic and White has to try and demonstrate (not in words, but in deeds) that the opponent’s voluntary rejection of castling has substantial significance. One of the best replies is considered to be 8 Bd2, which is directed against the standard manoeuvre ….Qd8-a5-a4 and at the same time does not allow the complications which are possible after 7 a4 Qc7 8 Nf3 cxd4.’

It would be quite possible to spend a huge chunk of one’s life analysing The Traxler. The author focuses on lines resulting from a strong ninth move:

‘…which is definitely the best winning attempt in my opinion.’

Brain-twisting positions are commonplace in this opening, such as this one: 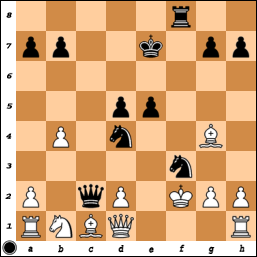 The point is that these Yearbooks are not afraid to spend time and effort on unusual variations as well as all of the popular main lines. With a few volumes in one’s library it would be possible to start to build up a very impressive repertoire based on the high level material on offer.

Some of the comments betray a sign of the times, such as this one from Paul Boersma, during a survey on the Queen’s Indian in volume 89.
‘For uneducated or younger players I should perhaps add that Nimzowitsch was a nervous grandmaster of the first quarter of the twentieth century who invented many positional ideas/terms regarded as superfluous in our era of computers.’

GM Glenn Flear inhabits the final section of the Yearbooks and is given six or so pages to convey his thoughts on recent chess books.

‘All the authors below are cherry-picking for us, but can we rely on them having a discerning taste for fruit?’

The amusing titles continue in Volume 90 with ‘Never Mind The Quality…Feel The Width’. Once again five opening books are assessed, including New in Chess’s own edition of ‘The Black Lion’ (which will be given a full review here very soon).

New in Chess Yearbooks are impressive tomes and will definitely be of benefit to stronger players. Average club players will probably find them tough going and a on the deep side…

…which allows my segue neatly into this series:

Chess Opening Essentials 3 Indian Defences, Complete
GM Dimitri Komarov, GM Stefan Djuric
and IM Claudio Pantaleoni
336 pages New in Chess
Editor Peter Boel sets out the aims of this series - which is set to run to four volumes - in his introduction. The books set out to be:

The original (Italian) editions came out in 2005 and have been updated to include games all the way up to early 2009.

There is an eye-catching and effective use of colour throughout the books, typically to highlight a name, important position or star move.

Each opening starts with a short essay followed by a fully annotated explanation of the moves in question. Supplementary study games are included (without notes, but highlighted by colour to distinguish them from the main text).

Here’s a randomly selected piece from volume 2, regarding the main line of the Tarrasch Defence, just after White has played 6 g3: 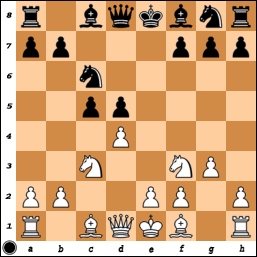 ‘From the g2-square the bishop will bear down on the weak d5 pawn, and consolidate the defences of the soon-to-be castled king against Black’s characteristically energetic piece play. This variation was played so successfully by Rubinstein that it brought the Tarrasch almost to the point of extinction before its revival in the 1960’s.

Now we take the move so much for granted that it seems almost natural. Yet this is far from the case; even though 6.g3 was first played by Carl Schlecter in 1908, it took 20 years of play at the highest levels before it became clear that it was White’s best move! Today, in the age of the Internet, this seems incredible, but in those days, tournaments were far fewer, and new ideas circulated neither freely nor quickly.’

Here’s a sample from volume 3: 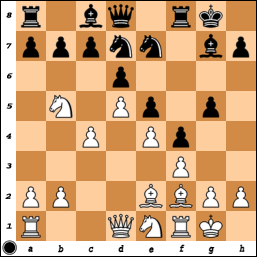 ‘Korchnoi’s idea from 1987 had a couple of initial successes, only to find itself quickly abandoned.

The strategic concept is to eliminate the fundamentally important c8 bishop after 13...a6 14 Na7. Do not forget that Black’s chances of successfully attacking the kingside are reduced to practically zero without the light-squared bishop, which supports …g5-g4 and attacks the h3 point. This is true not only in this line but for all the Mar del Plata variations.

However, unfortunately for White, after the simple 13...b6! The knight move is shown to be a waste of time.’

The examples quoted are both typical of those found throughout these books.

Learning the moves in conjunction with the relevant ideas and plans is clearly a good way to develop a firm understanding of the openings.

These books are ideal for improving club players, including keen juniors. Even experienced players will find them useful as a starting point if they intned to add more openings to their arsenal.