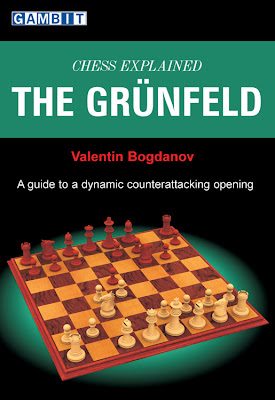 Chess Explained: The Grunfeld
IM Valentin Bogdanov
(with contributions by GM Viacheslav Eingorn)
128 pages
Gambit
‘The Grunfeld Defence is one of the most aggressive openings at Black’s disposal. He creates immediate imbalance and plans to strike at White’s centre with all available resources.’

The coverage starts off with the quiet fianchetto variations and proceeds to work through all of the main line, in this order:

Lines with Bf4 or Bg5

The presence of former World Champion Garry Kasparov, who did so much to popularise the Grunfeld, is present throughout; however, theory has moved on somewhat since he last played it at the highest level. Those worried by his dreary loss to Kramnik in 2000 (game 2 of the match) will be pleased to find that Black’s defences have been strengthened in recent years.

White players quite often try to keep positions quiet to avoid Black’s tactical intentions. The ethos of this book’s recommendations is to play actively as soon as possible.

For example, in one of Karpov’s old favourites: 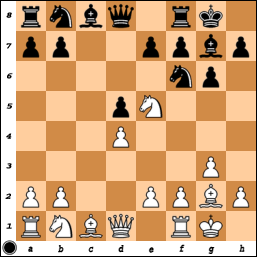 …game 1 in the book suggests mixing it up with 8 …Ng4 rather than acquiescing to the slightly worse position in a dull symmetrical world.

Naturally, there are also times when White tries to use his space advantage and pawn centre to blast Black off the board. A good example is seen in the Modern Exchange Variation (with an early Rb1). 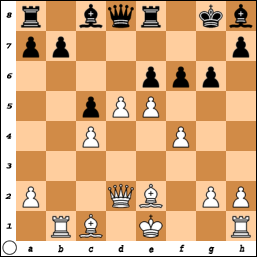 16 f5!! when you can fun analysing why the various captures all favour the first player.

The older Exchange Variation have been back under the microscope in recent times and nobody should sail down this line without suitable theoretical preparation: 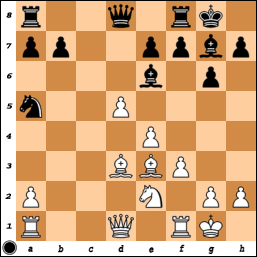 I was interested to see how the book would verbally sum up this maelstrom of activity and it says:

‘It is evident that White has at least some compensation: his pieces are more active, and the black king’s position is weakened by the absence of the dark-squared bishop. The extent of this compensation is the whole question, as Black’s has resources of his own. The position is open, and Black’s counterplay along the c-file can bring welcome simplification, and the transfer of the queen via b6 with gain of tempo may prove an important resource.’

White has numerous options here, but the book sticks with coverage of two, namely 16 Bh6 and 16 Rb1.

Black has a safer option with 10 …Bd7, which is covered too. ‘On d7, the bishop supports ….b5 and vacates the c8-square for the queen’.

Although other main lines, such as Karpov’s Seville Variation (12 Bxf7+) are covered, I couldn’t find any mention of Hans Berliner’s early Rc1 in the Classical Exchange Variation. That strikes me as quite an omission and Black players need to prepare carefully to plug this gap or face the prospect of being beaten quickly by ‘The System‘.

The balance between analysis and prose explanation is a tricky one to maintain, especially with something as theoretical as the Grunfeld. Consequently, some of the analytical lines turn out on the long side but on the whole this is a useful guide to a dangerous opening. 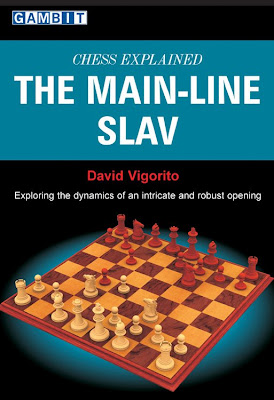 ‘The Main-Line Slav is one of the key battlegrounds of modern chess, with adherents among all levels of chess-players. It is notoriously difficult for White to prove any advantage against Black’s solid set-up, while the lack of symmetry in the position provides scope for creative players to obtain winning chances with either colour.’

The Slav is a tough nut to crack and would make a worthy addition to an anti-d4 repertoire.

The material here is very specifically placed in the realm of the true main line of the Slav There is no coverage of the Exchange Variation or other early deviations and the whole book deals only with play leading from this position: 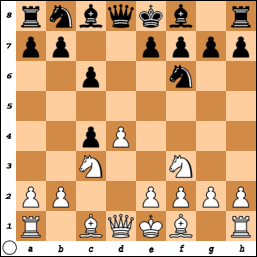 The chapters are arranged thus:

White Avoids 5 a4: The Quiet 5 e3 and the Geller Gambit

There are 25 main illustrative games, from 2001 - 2008. The list of Slav practitioners is truly impressive, especially given that so many top players have been willing to play the opening with both colours.

IM Vigorito has over a decade’s worth of experience with the Slav, so he passes the ‘practice what you preach’ test.

Each chapter begins with a small prose overture of the featured games, which sets the scene nicely and there’s a set of ‘Conclusions’ at the end to summarize the salient points.

The Slav is, generally speaking, a positional opening rather than a tactical one and as such it lends itself to explanatory prose without the need for lengthy variations. Here’s a sample from very early on in the book:

‘The four games in this chapter examine the main lines arising after 1 d4 d5 2 c4 c6 3 Nf3 Nf6 4 Nc3 dxc4 5 a4 Bf5 6 e3 (the Dutch Variation) 6 …e6 7 Bxc4 Bb4 8 0-0 where White follows up with 9 Qe2. White will aim to advance in the centre with e4, and Black can react to this plan in a few different ways. It is important for Black to be prepared to meet this advance, and the move-order that Black chooses will generally commit him to certain middlegame plans. This chapter is fundamental to understanding the Main-Line Slav because both sides develop in a very natural and classical manner, so we see the clash of ideas in its purest form.’

This is typical of the text throughout; it is well-written, uncomplicated and informative, even when the lines head for more tactical waters. For example, there’s an interesting Bishop sacrifice in game 14: 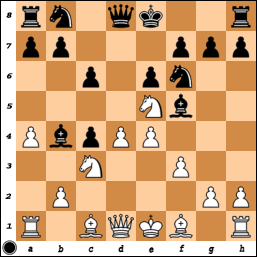 This enjoyed a wave of popularity a few years ago. IM Vigorito does a good job with his explanations:

‘This is without doubt a critical position for the whole line with 8 e4. This unbalanced position has been seen hundreds of times in master play, and poses challenges for both sides. Black has three pawns for the piece and White’s king is exposed, but often White can successfully fight for the initiative. Black must also be careful about what type of endings he goes into. If he cannot get his pawns moving, White’s extra piece will be more important. Often White’s king can play a vital role in the endgame too. Black has to be particularly careful about his queenside falling, because White can focus all of his pieces (including this king) in that direction.

Nevertheless, it is not all doom and gloom for Black - the white position is not so easy to handle either. Any mistake could prove very costly because White’s king is exposed and he still needs to get developed.’

He then goes on to discuss Black’s three different methods of play before summing the current thinking on the whole line:

‘…the general consensus is that Black is suffering a bit to achieve nothing more than a draw. It is more fun to play a piece up than a piece down! In this game Black is on the cusp of equality when a single mistake allows White to seize the initiative for good.’

I like his writing style and genuinely felt I understood The Slav better after studying this book. In my opinion this is one of the best of the ‘Chess Explained’ range and one which club players should find very useful and instructive. 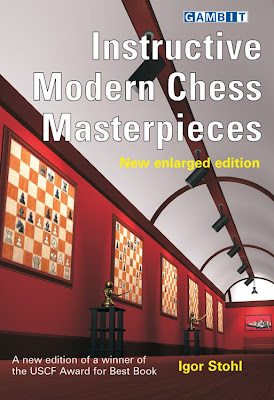 ‘62 brilliant games involving the best players in the world, with notes by one of the top annotators.’

This is a new, enlarged edition of a highly rated book; the first version, published in 1999, won the USCF Award for Best Book. 12 games have been added to the original 50 (taken from the years 2000 through to 2007) and there have been various updates to the older analysis.

Each game is annotated in great depth, with a combination of verbal and analytical comments. This gives plenty of material for serious analysts to sink their teeth into as well as good explanatory notes for those who prefer a prose description of the encounters in question.

Once again Gambit provide an excellent and unusual picture for the book cover. Several positions from chess masterpieces hang in an impressive gallery, clearly elevating the little game of chess to the levels of other art forms. 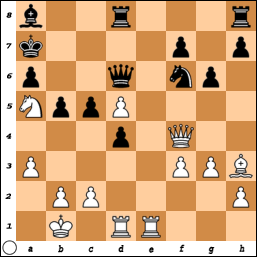 …the one in which the blue touch paper was ignited by means of 24 Rxd4!

Others were unfamiliar to me, such as Topalov’s (ultimately unsuccessful) attempts to perpetrate a King hunt of his own. 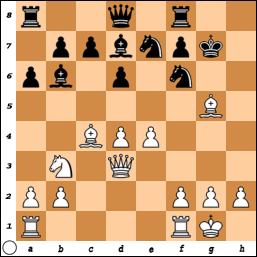 '16 Bxf6+! It’s high time to reveal that so far we have seen nothing new; this position had occurred only nine days earlier between the same players in a rapid game in Frankfurt. Then Topalov played the weaker 16 Rae1?! Nh7 17 Bh4 f6 18 Re3 Ng6 19 Bg3 (19 Rg3 Ng5 is no improvement for White) 19...f5! 20 exf5 Bxf5 21 Qd2 Nf6 22 Rfe1 Nh5 23 Bd5 Rb8 24 Be4 Qd7, his compensation gradually evaporated and `he went on to lose. The fact that Topalov repeats the line and introduces a novelty speaks volumes about his optimism. One must also admire Leko’s courage in repeating this risky line and facing a prepared opponent, and it soon transpires that his own analysis was much deeper.’

The only improvement I could think of would be to add a little bit more historical context to the game introductions. It would be interesting to read about what stage in a match or tournament the featured game occurred, to give an indication of the sort of pressures the players were under. Playing a brilliant game when one is already easily winning an event is a lot different to a producing something special in a must-win situation.

There’s an index of players’ names, one for the openings and even one for the endgames. I was able to very quickly see that:

Kasparov, Anand and Shirov all have eight games in this collection

21 different openings are featured and the Sicilian is clearly the most popular choice (14 games).

The reader will have to work very hard to get the most out of GM Stohl’s magnificent annotations (some of the variations are very long) but the extra effort will be well\rewarded by a greater understanding of extremely high level chess. It’s a serious book for serious players; elephants will bathe for months - if not years - in its deep waters but gnats should look elsewhere for fear of drowning.

The massive page count weighted against the r.r.p. of £17.99 makes this excellent value for money.

The problem with Gambit covers is that they all have the same look and feel. They all picture a room with an arced ceiling, or include some computer-generated piece of furniture, or some anthropomorphically enhanced piece: boring.