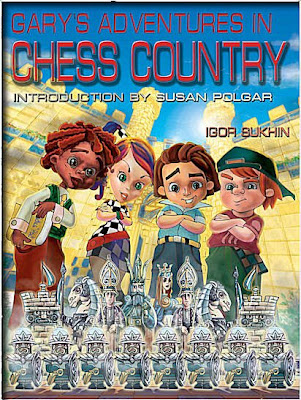 Gary’s Adventures in Chess Country
By Igor Sukhin
152 pages Mongoose Press
‘By following Gary on his adventures - and by solving engaging puzzles alongside him - your child will have a unique opportunity to improve focus, memory, and critical thinking skills, all while having fun.’

The titular Gary is a young boy left alone with ‘the most boring babysitter in the history of the universe’. Before he knows it, he is whisked off by Cassie on her tricycle to an amazing chess adventure, featuring the following activities along the way…

The Gates of Caissa

The Knight in Shining Armour

An Audience With the King

Gary and Cassie take the reader on a magical journey through the wonderful world of chess. There’s plenty of clever word play and an abundance of unusual - yet highly instructive - puzzles to solve along the way. The vibrant colours bring every page alive.

Igor Sukhin may not be well known to Western readers, but he is revered in Russia, with the Russian Department of Education being particularly keen on recommending his books to young players.

Prior to publication, I was in the fortunate position of being able to test out some of the material on my own pupils.

The narrative is fun and the colour is absolutely outstanding, from the first page to the last. There’s no way this chess primer could ever be accused of being boring or dull.

One particularly impressive feature is the unusual selection of puzzles. In addition to the straightforward checkmates, there are copious amounts of positions aimed at teaching one particular lesson at a time. The basic moves of the pieces are demonstrated with a single piece given the task of manoeuvring to capture a flag or to avoid dangerous mines. These exercises were very popular with my students and as the puzzles got slightly tougher each time they were able to steadily develop their powers of calculating and thinking ahead.

Here’s a few random samples of the text to demonstrate the clever use of words, a feature which is present throughout the book:

He won’t need a flashlight, but can a rook move from a light square to a dark square? From dark to light? From light to light? From dark to dark? Despite all the king’s horses and all the king’s men, is it possible to capture the king in a game? Ladies and Gentlemen, start your engines! In the starting position, which queen (white or black) has a light-square bishop next to it? Maybe when nobody’s looking, he practices on his trampoline, but can a king jump over other pieces?

There are some regular chess problems too, and the following examples demonstrate the standard:

Check it out: work out a way that White can checkmate Black in two moves. 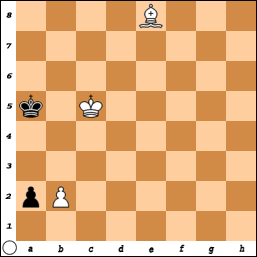 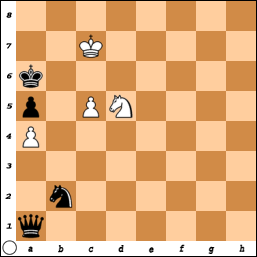 I won’t give the answers; solving the problems should be well within your powers.

Here’s another one, coming in process of a problem-solving bout between Gary and Zug:

The chess battle between the two boys went on until they reached the following position: 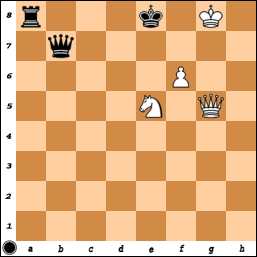 It’s Black’s turn to move. What would you do? ‘Checkmate in one move!’ declared Gary. ‘No way!’ Zug was bug-eyed with surprise. ‘There is nothing you can do here.’ ‘Oh yes, I can!’ said Gary with triumph, and he….

Well, dear readers, what did he do…?

It’s a magical journey - and a fantastic book for young juniors. The sturdy hardback binding should give the book a fighting chance of reasonable longevity even in the classroom.

This should be required reading for all those involved in Primary School chess clubs.