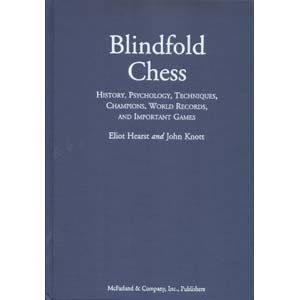 ‘When Philidor played two blindfold games at once in the eighteenth century, eyewitnesses were asked to swear affidavits attesting to this remarkable accomplishment. After such a performance in London in 1782, The World called it ‘a phenomenon in the history of man’ and added that the feat ‘should be hoarded among the best examples of human memory, till memory shall be no more’.

Blindfold chess has come a long way since the days of Philidor. The famous Melody Amber tournaments, combining blindfold chess with Rapidplay rounds, have brought this formerly obscure, almost magical branch of the great game into mainstream respectability.

In this new book, two extremely diligent authors seek to create the definitive account of the genre.

The list of contents provide a straightforward overview of what’s in store:


Part I. The History of Blindfold Chess

Between Philidor and the Late 1800s

The First Part of the Twentieth Century

The Techniques of Blindfold Champions


The book had a long gestation period. Both authors worked independently on the subject before learning of each other’s efforts in 1985. The amount of research and work involved in producing such a labour of love must have been absolutely immense. Knott and Hearst have been interested in Blindfold Chess for a very long time; indeed, the latter was an assistant, in his junior days, at the famous USA v USSR Radio Match of 1945. At the end of the match, Reuben Fine gave a simultaneous blindfold display.

There’s an excellent selection of photographs and illustrations, from portraits of the players to scenes of them in action. The photo of Alekhine, with his back turned against his 28 opponents in his 1925 World Record attempt, clearly shows the enormity of his task.

The World Records for Blindfold Chess are a contentious affair. Doubts can easily be cast on the conditions of the displays and strength of opposition. It’s not so murky when the game scores have survived, but the claim of Janos Flesch - successful over a staggering 52 boards - is particularly controversial. Unfortunately he died in 1983 and the vast majority of the game scores have never been found. Flesch was of the opinion that a film had been taken of the display. Despite the best efforts of the authors, only a very short filmed snippet has been found; not enough to prove things either way.

Health issues have dogged blindfold chess for a very long time. Philidor was cautioned against such activity and matters were not helped when the cause of Pillsbury’s death was given as: ‘an illness contracted through overexertion of his memory cells’, (perhaps to cover up the truth about his fatal dose of syphilis).

Kasparov, when asked about his refusal to play at the Melody Amber events, has often been quoted as saying ‘I don’t want to become mad!’ but none of his fellow Grandmasters suffered such a fate after competing. Curiously, Kasparov was very successful when he gave a blindfold simul in 1985, winning eight and drawing two of the ten games.

This one, ironically against a computer (how would suffer against such things later in life), is particularly impressive. 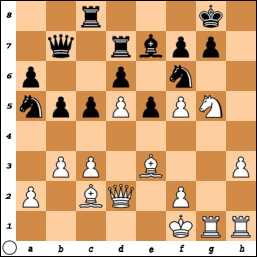 ‘Mate is forced in two more moves. We believe that Kasparov could not have played much better in a regular serious tournament game and that thus game deserves a more prominent place in collections of his games or examples of his brilliant combinations.’

As usual with McFarland books, this one provides a goldmine of fascinating historical information. It should naturally take its place as the definitive work on the world of blindfold chess and it will also appeal to anyone with even just a passing interest in chess history.

Fans of the greats, such as Philidor, Alekhine, Reti and Najdorf, will be especially pleased to see many games which should be new to them. Lesser-known chess stars get the chance to step put of the shadows too, such as Koltanowski, Breyer and the mysterious Vladimir Ostrogsky.

There are some unfortunate blunders, even by the very best players, but there are plenty of brilliances too. Here’s a few sparkling examples of the latter. 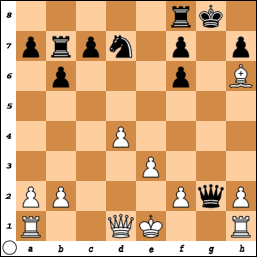 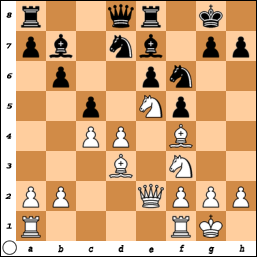 In one famous blindfold game Blackburne astonished those present by announcing mate in 16 moves - surely the longest announcement of mate in the entire history of blindfold chess. 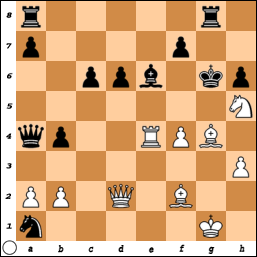 All good fun, and an incredible achievement by The Black Death. However, the chess engines do their best to spoil the party by showing a speedier win after 3.Rxg6 fxg6 4.Qxd6, when the mate arrives sooner than in the intended game continuation. 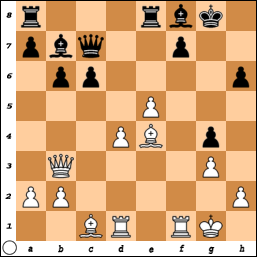 Najdorf - Andrada
21 Rxf7! Qxf7 22 Bh7+ Kg7 23 Bxh6+
This extremely impressive volume concludes with another typical McFarland trademark: appendices, a bibliography and very useful indices. Including here are full listings of all the World Record attempts, even giving the names of the opponents (where known).

There’s so much to enjoy in this marvellous book. Expertly written and beautifully bound, it is already pencilled in on my list of the best books of 2009.

In your review of "Blindfold Chess" you quote a snippet from the Najdorf - Andrada game but the move sequence doesn't look right at move 22... Kg6 should read 22... Kg7.

As always though a delightful read!

Thanks Paul, a good spot!

I have now changed the move.