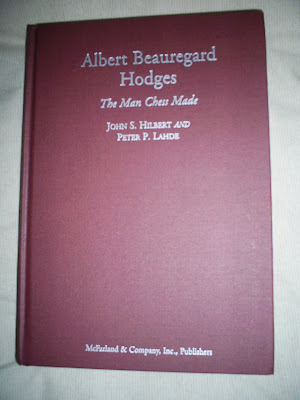 Albert Beauregard Hodges
The Man Chess Made
By John S. Hilbert and Peter P. Lahde
McFarland & Company
Who was Albert Beauregard Hodges, and why is he deemed a worthy subject for such a detailed biography? His name isn’t so well known outside of America.
In the opinion of the authors,
‘Few men owe as much to chess, or gave as much to chess, as Albert Beauregard Hodges’.
The Introduction sheds considerable light on the matter, highlighting key moments from his life and whetting the appetite for the considerable amount of material to follow.
The book is split into two main sections. The first part covers his life and the second features his chess games.
The life story is a long one, running all the way to page 328, and is covered over the course of 10 chapters.
‘The Tennessee Morphy’
Ajeeb and the ‘Snugs’
New York, 1890-1892
1893: A Year of Achievements
1894: A Year of Champions
1895: A Year of Team Play
Anglo-American Cable Matches
Domesticated Play
Tournaments - Too Late
Towards an Ending
The Final Years

Hodges was born during the American Civil War and his early life shows typical features of the time; his middle name was chosen after a Confederate army General, Pierre Gustave Toutant Beauregard and the Hodges household had a black slave.
His early chess life included an odds match with the great Zukertort. Hodges won the match, but a surviving quote refers to a game in which he wasn’t successful:
‘When Zukertort started play, he placed his hat on the window casing. I remarked that was a big hat. Zukertort told me he had brought it from England, that it was size 9.5 and that it would be difficult to find one here large enough to fit him. Then and there I thought how absurd it was for me to try to win from a man with a head like that. I was right - he beat me.’
His early chess games were played in Nashville and his growing reputation led to two matches with Max Judd. This, in turn, led to a spell as the operator of the chess ‘automaton’ Ajeeb. The famous touring chess attraction, was of course a fake. Hodges was the hidden operator for a while but it was only later that he officially revealed his involvement. His own reminiscences are repeated in this book and make delightful reading. Sometimes being tucked away out of sight had its dangers:
‘…and how often the expressions of the visitors amused me, except on one evening, when a very hilarious party of wild western men came in, and one of them said he would pay the damage if his friends would let him shoot a hole through the dummy, reaching for his hip pocket as he shouted his contempt for ignorance of the onlookers. I did not feel at ease until his friends forced him to leave the room.’

American chess received a big boost during the rise of Paul Morphy but entropy set in after his early retirement.
‘After the Morphy phenomenon, extensive public interest in chess in the United States rapidly declined, the Civil War’s hardships replacing the game’s joys. A return to peace brought with it, in time, a resurgence of interest in leisure activities, and as the country tried to heal, signs of chess life increased. But the development was slow.’
Part of the resurgence was due to the visits to clubs by chess superstars. Steinitz was already in residence in America and ambitious chess clubs would often invite other top players for a variety of exhibition matches and other events. The knock-on effect would be increase local interest and club membership. For the star players it was an opportunity to boost their (usually meagre) funds. Hodges faced Emanuel Lasker in three exhibition games in 1892 and even managed to win the first one.
Later in life, Hodges would claim it as his ‘best effort’.
‘I did not start this game with very much confidence, as Dr. Lasker won the toss for choice of pieces, and, at the twenty-second move, one my friends ‘encouraged’ me by informing me that Steinitz, who was one of the onlookers, had just remarked that I had ‘a lost game’! As the combination I began three moves later was being finally analysed by me, I retorted ‘tell him I shall win’; I rather think that Dr. Lasker heard this remark, and believe that if it did not help me win, it at least disturbed him for a little time.’
Lasker took revenge in the next two games and even defeated Hodges again in a simultaneous display.
The authors comment:
‘Although his best years as a chess player were almost on him, one can hardly imagine a better reminder for Hodges than this loss against Lasker in simultaneous display that he was wise mot to attempt to enter the ranks of professional players’.
Fortunately for Hodges, he had forged a career as the Secretary of Sailors’ Snug Harbour and was thus able to avoid having to rely on chess for his living.
His status as an amateur player didn’t mean he ended up as weak player. The book charts his considerable number of tournaments and matches, which include a battling 4-4 contest with Adolf Albin (another chess hero recently spotted at Marsh Towers; see review column 61). Steinitz and Lasker were in the audience for part of the match.
When Hodges defeated Showalter in match in 1894 it may or may not have been for the title of American Champion. Controversy raged at the time as to whether or not the title was Showalter’s to play with. The various arguments are given full coverage by the authors.
It is clear that the emphasis is placed mainly on the subject’s early chess career. He was a past his prime when he finally broke into major international tournaments, such as Cambridge Springs 1904, but latter events are nevertheless still covered in some detail.
There are 351 games and each one includes contemporary annotations from a very wide range of sources. The annotators include Hodges, Steinitz, Gunsberg, Lasker, Pillsbury and many others.
Hodges played a large number of chess giants, including Steinitz, Lasker, Capablanca, Pillsbury, Chigorin, Marshall and Janowski. The vast majority of the games - and annotations - will be fresh and new to all readers (only 130 are included in ’Big Database 2008‘).
There are so many fascinating encounters that I had trouble selecting just a small number to whet the appetite. Three vignettes must suffice for now otherwise this review could end up book-sized. 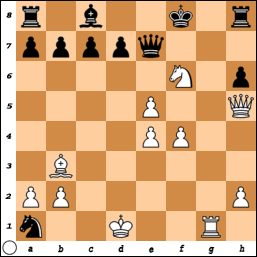 Not the best game from the point of view of Hodges, but it features a typically picturesque finishing stroke by the First World Champion.
17 Qxh6+ 1-0 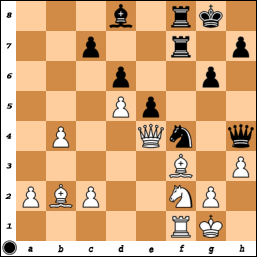 This position is from his famous win against the future Second World Champion.
34 …Nxh3+ Black lights the touch paper and gains a decisive advantage (0-1, 43) 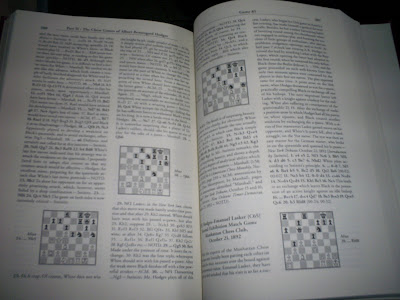 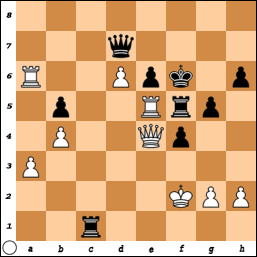 Hodges died aged 82 in 1944, with an angry war burning away just as there was when he was born. His life was long and - chess wise, at least - very eventful. ‘The Man Chess Made’ is indeed a very accurate subtitle to his life story.

As usual with McFarland books, extra space is devoted to special features. There are four appendixes featuring a variety of material, including a full tournament and match record, the chess problems of Hodges, three obituaries and a small feature on ‘The 1897 Staats-Zeitung Cup Fiasco’.

Six indices complete an extremely fine work. The Selected Bibliography lists close to 150 sources, many of them obscure newspapers. The authors have dug very deep indeed and their efforts are highly commendable.

John S. Hilbert and Peter P. Lahde are ideal authors for such heavyweight historical chess biographies. Both have proven track records and the latter has a book on another American chess hero, Isaac Kashdan, due out very soon (published by McFarland, of course).

Production-wise, this book displays all the hallmarks one has come to expect from McFarland: beautiful hardback binding, quality paper (with that special McFarland smell), large page count (542) and extremely good attention to detail. 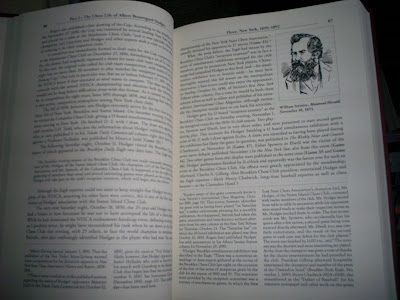 Line drawings and photographs augment the text, depicting a plethora of chess personalities, some famous and some more obscure.

2008 has been a good year for chess books but very few can hold a candle to this one.