Garry Kasparov on Modern Chess
Part 2
Kasparov vs. Karpov
1975-1985
Everyman Chess
Grandmaster Garry Kasparov may have retired from competitive chess but there’s no doubt that his connection with the great game is still extremely strong. His most recent books have all proved to be very popular.

This new volume, in which his attention is switched from his great predecessors and modern opening developments firmly on to his incredible rivalry with the 12th World Champion, Anatoly Karpov, is unquestionably one of the most eagerly awaited chess books of all. Their titanic 1984 clash saw Karpov take a stunning 5-0 lead, only to be eventually pegged back to 5 -3. The match was then called to a halt in very strange circumstances. A rematch the following year saw Kasparov become the youngest World Champion. Who better to guide readers through the extraordinary events - on and off the board - than the man who played a starring role?

It’s a sizeable volume, completely in keeping with the series so far. The 424 pages are split neatly into four chapters:

Kasparov starts the story of his greatest chess rivalry with his first over-the-board meeting with Karpov; in a simultaneous display back in 1975. The 12th World Champion managed to beat Kasparov’s Sicilian Defence on that occasion. Little did the world know that Kasparov and 1...c5 would eventually lead to Karpov switching from 1 e4 virtually permanently.

Three draws then follow in their personal encounters before the almighty clash that started in 1984. It' surprising how many years have gone by. Kasparov promises a completely new look on the whole rivarly.

‘Since I have already concluded my chess career and am armed with powerful analytical programmes, my commentaries have become more frank, and far more accurate.’

The preamble to the match covers the basics background of the 1983 Candidates cycle, with the almost catastrophic defaults of Kasparov and Smyslov to Korchnoy and Ribli respectively. Eventually, of course, the matches were played in London and the cycle was back on track. Kasparov is adamant that the whole thing was an attempt to stop him being able to battle his way to an inevitable title match with Karpov. The disadvantaged challenger facing the ‘golden boy’ champion is a recurring theme of the whole book.

This is the first time that Kasparov has annotated the games of his first match with Karpov.

‘The tension was so great and prolonged, and the psychological background so dark, that I had no desire to tackle this work.'

Every single game is annotated; even the short draws in the first match are given due attention. There’s plenty of new analysis and old opinions are often overturned.

For example, I’ve always had in mind that game 6 of the first match was a thoroughly controlled and impressive victory for Karpov, but Kasparov claims that things could have been quite different if he’d acted correctly at a critical moment. 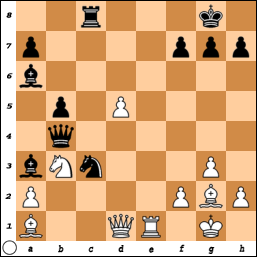 Kasparov, playing White, opted for 25 Qd4? in the game and went on to lose. He firmly believes there was a much beter way of proceeding.

‘One of the critical moments from the initial stage of the match. Here it would have done no harm for me to remember that in my childhood I liked arbitrarily to divide the chess board into right and left halves, and see what the balance of forces was in each of them. In the given instance all Black’s pieces are bunched together on the queenside, having left their lone king to its fate. The evaluation is obvious: White has an irresistible attack.’

He then analyses 25 Qf3!? and 25 Qh5!, both of which could have led to a winning position.
Such moments abound throughout the book.

The Tarrasch Defence to the Queen’s Gambit is still very much under a cloud following Karpov’s 2-0 success in the first match. Prior to that, Kasparov had won games with it against several of the world’s top players and relied on it throughout his Candidates matches. In a critical position, thought to be just bad for Black, he now offers a new resource. 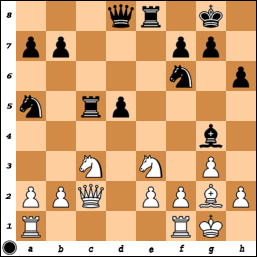 Now, instead of 17...Be6?!, Black should try 17...d4! There are brain-twisting variations after the critical 18 Rad1 but Kasparov thinks Black is fine.

‘To all appearances, 17...d4 gives Black sufficient counterplay and is the best reply to Karpov’s plan. But this move has still not won general recognition. The point is that or first match was not properly analysed, and my defeats in the 7th and 9th games created the impression of being opening failures, after which the Tarrasch Defence lost its popularity and the development of its theory was clearly retarded.’

There was a lot more than pure chess going on. Kasparov freely admits being helped by a parapsychologist after going 0-4 down. Given the relentless battle over the board, the political machinations away from the board and all the other extras it’s astounding that the two players came away from the experience sane and still willing to play more chess.

Chapter 3 - 'The 49th Game' - refers to the ‘game that never was’. The match was (in)famously brought to a halt after the 48th game, following two successive Kasparov wins, dragging the challenger kicking and screaming back into what had, for a very long time, seemed like a completely lost cause.

‘Who remembers now, after nearly a quarter of a century, why the match was stopped?! And if they do remember, who will they consider to have come off worse?’

This chapter, lasting just over 30 pages, includes a full transcript of the infamous press conference in which Campomanes, Karpov and Kasparov all played their part in a an utterly bizarre affair.

It’s a good idea to present the transcript just as it is. Not only does it preserve a very important historical document but it would be extremely difficult to paraphrase or condense it without losing the feel of the astonishing occasion. Kasparov then writes about the fall-out from the decision and covers the period between the two matches. To show he was still in great shape he defeated Hubner and Andersson in matches.

However, Karpov was by no means a completely spent force between during the hiatus; he won the 1985 OHRA Amsterdam tournament without losing a game. So Kasparov’s comment about Karpov losing three games in a row (following his victory in game one of the second match, added to the last two games of the first match) isn’t accurate.

I’ve read a lot about the K v K matches over a long period of time but there was plenty of new information for me here. I didn’t know that Petrosian had offered to help Kasparov in the match. It seems a little bit out of character for one so compliant with Karpov’s reign.

Nor was Petrosian the only one siding with the young challenger. Botvinnik was clearly a supporter and apparently so was Tal. After analysing with Kasparov the game in which he suffered his fifth defeat (leaving him 0-5 down in a ’first to win six games’ match), Tal offered some parting advice: ‘Young man, consider that the train gas left, and all you can do is loudly slam the door in farewell’.

It took some time to start the slamming of the door but I’m sure that even Tal would have underestimated the exactly how loud the bang was to be.

Game 15 started with 1 Nf3 by Karpov and he continued the trend further into the match. Kasparov presents his theory as to why the reigning champion avoided the more direct 1 d4. Apparently Dorfman, a member of Kasparov’s team, was secretly playing on the match ‘Totaliser’ and predicted that the Black King’s Bishop would be developed on g7. 1 Nf3 doesn’t stop a King’s Indian but it makes life difficult for a Grunfeld. At that time, the Grunfeld wasn’t a part of Kasparov’s repertoire. However, he reveals here that GM Adorjan, an acknowledged Grunfeld expert, had flown in the help Kasparov and that he had indeed intended to switch his opening against 1 d4. This is quite a revelation, as the Grunfeld became a surprise weapon later in their matches and became one of their main battlegrounds.

Kasparov’s passion, perseverance and paranoia in the 1984-5 matches are all vividly brought alive in this classic book. Over the course of the two matches he takes a journey through the full spectrum of emotions and this comes across very strongly.

The layout is very good and clear and it’s a solid hardback just like the previous volumes. Games and openings are indexed but a bibliography would have been a valuable addition, especially as numerous players are quoted throughout the book.

Kasparov has, of course, moved on from World Chess Championships to fight more dangerous battles. When he spent a few days behind bars he was touched by Karpov’s (unsuccessful) attempts to arrange a visit. In the introduction that: ‘…his good will gesture outweighed all the negative factors which had accumulated during our long years of confrontation’. Following what must have seemed like a lifetime locked in a struggle with a bitter opponent that strikes me as a very interesting comment indeed.

I’m sure that most readers will be left hungry for more and further tomes are obviously in the pipeline. There’s far more drama to come; this volume covers ‘just’ the first 76 games of the massive 181-game rivalry between these two giants of chess.

Missed a review? Pop along to my archive:
http://marshtowers.blogspot.com/2007/12/chess-review-archive.html
Posted by Sean Marsh at 05:09