Here's a round-up of the latest chess products aimed at self-improvement, aimed at various levels of player from juniors to experienced tournament players. 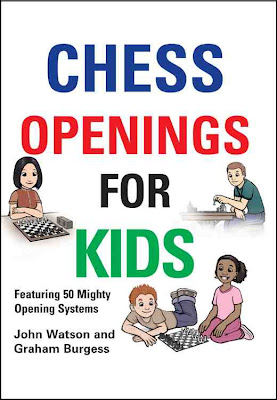 Chess Openings For Kids
By IM John Watson and FM Graham Burgess
128 pages
Gambit Publications
Readers who are familiar with Gambit's earlier works, 'How to Beat Your Dad at Chess' and 'Chess Tactics for Kids', will recognise this as the next volume in the series. This time, IM Watson, '...arguably the world's foremost writer on chess openings', has been drafted in to assist the Gambit team.
The idea of the book is to provide basic information for juniors on 50 Mighty Openings. Six pages of introductory comments, highlighting the merits of thing such as development, King safety and pawn structure. Then it's on to the 50 Mighty Openings in question. These include all of the classics, starting with the Giuoco Piano and ending up with the Reti Opening. Each one received a double-page spread of coverage, with good notes and plenty of diagrams to explain the first few moves.
There are some test at the end of the book. Readers are first asked to identify a series of openings by the moves alone and then prompted to provide the moves relevant to a set of named openings. Finally, there are 36 test positions, based on opening traps. Here's a sample to try. 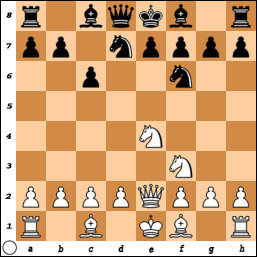 White to move
The book is augmented by illustrations from Cindy McCluskey. These add further interest for juniors and feature subjects such as The Grand Prix Attack (some chess pieces chasing the enemy King around in sporty car) and The Reversed Dragon (a mythical beast practicing what appears to be a yoga position).
The book succeeds in its aim. Juniors, familiar with the moves and basic tactics and now wanting to take the next step, should be able to strengthen their play and worry their opponents with some judicious name-dropping.
The sturdy hardback cover is not only attractive; it should extend the life of the book too (an important consideration when books are placed into the hands of juniors!). 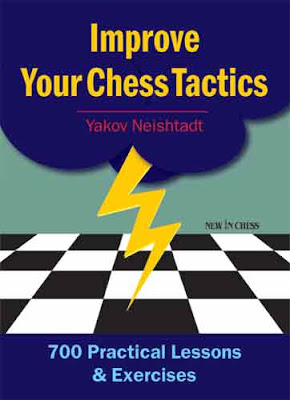 Improve Your Chess Tactics
By Yakov Neishtadt
383 pages
New in Chess
Yakov Neishtadt is a very experienced author and certainly no stranger to books with a tactical flavour. Here, he offers a book which is '...aimed at a wide range of chess amateurs...' which '...may also be used by an experienced player, a master, or even a grandmaster. Even he will find many positions that are unknown to him, and which he can use to show his own pupils'.
Following a short essay on 'The Alpha and Omega of Chess' - explaining various pieces of terminology and defining the nature of a combination - it's straight into the action, with the reader invited to solve the first 380 puzzles. These are arranged by the standard themes.
The second part of the book offers the remaining positions (up to 736) in the form of an examination. Readers are given little in the way of clues in this section and must discover the relevant theme for themselves, followed (hopefully) by the solution.
I found the section of 'Miracle Saves' to be the most entertaining. 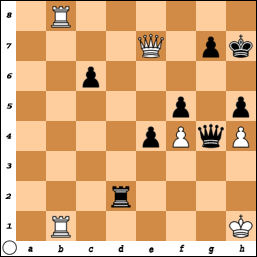 White to play
Produce a miracle save
It's a great collection, featuring positions form every phase of the game and set out very nicely by New in Chess. The main test pages typically feature six positions so the pages are never cluttered. Improving club players should have a good time testing their tactical skill.
ChessBase have started three more new series, starting with...
Chess Expertise Step by Step 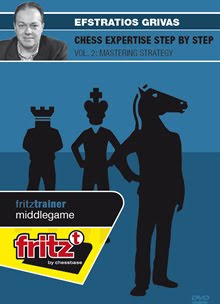 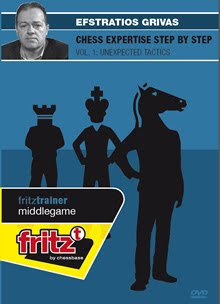 Experienced writer, player and coach GM Grivas presents the first two DVDs.
The material on volume is arranged thus:
About the Author
Introduction
Mate on the Back Rank
The Dancing Knights
Queen Sac Around the King
A King’s March
The f4 Break
Initiative Sacrifices

Although the material on these DVDs is well chosen, I am not a great fan of the presentation. I found the distinct lack of eye contact and monotone, heavily accented voice made the lectures hard going, even though the presenter goes over the examples quickly (sometimes taking just a minute or so).
Doubtless they are all very good examples of tactics but the problems with the presentation are quite important; I don't think the style of delivery brings the material to life in a significant way.
Here's a well-known sample of what to expect in terms of the actual material.
Nigel Short's famous quote: ‘Modern chess is too much concerned with things like pawn structure. Forget it – checkmate ends the game’ has rarely been better demonstrated than in his own game with Jan Timman. 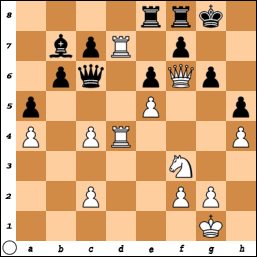 Short – Timman
Tilburg 1991
I'm sure you know how the game continued (and if you don't combine the hint given in Short's quote with a little King power!).
Volume 2's material is arranged in the following order:
Strategy Mastering
The Important f5 Square
The Useless Isolani
Emptying the Queenside
The a7 Forepost
Small Advantages
The Weak d5-Square

The presentation problems remain, which is a pity, because the material is again quite interesting. For instance, in the case of 'Small Advantages', Grivas demonstrates some fine play by the King of the Candidates. 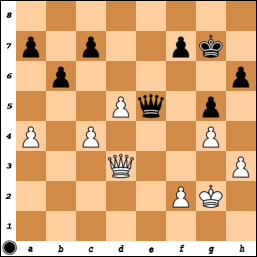 Howell – Gelfand
Amsterdam 2010
Boris Gelfand, the new challenger for the World Championship title, managed to turn the drawish position above into this: 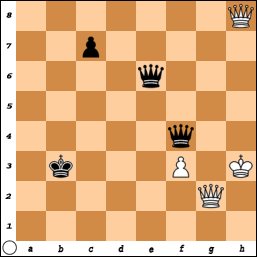 Maybe future volumes will see an improvement in the style of presentation, otherwise the problems mentioned above will prove to be very off putting to viewers. 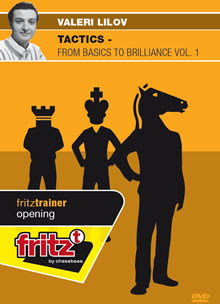 Tactics From Basics to Brilliance
Volume 1
By FM Valerio Lilov
5 hours and 30 minutes
ChessBase
The second new series concerns tactics.
In his introduction, FM Lilov encourages viewers to watch every video lecture on the DVD and take written notes on each one to assist the learning process.
He opines that there are two main ways to win a chess game, namely checkmate or by winning an important amount of material. The advice given is to create a weak point in the enemy camp and then apply '...the highest amount of pieces put against the weakness'. Lilov stresses that tactics are the final part of a successful strategic idea and should be seen in that context. There follows some advice on the nature of tactical targets, with the emphasis on forced variations.
Perhaps you can find some forced variations to help Black here. 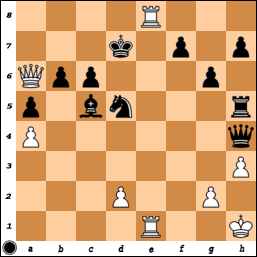 Black to move – is he in trouble?
It looks that way, until one discovers the forced checkmate in four moves.
Then he runs through various tactical themes and ideas, such as ‘Sacrifices’, ‘Combinations’, ‘Blockade’ and ‘Interpose’.
Can you, dear reader, discover an example of the latter theme in this position? White to play
The Outro encourages students to practice tactics ‘…working every day or every possible moment on tactical puzzles and combinations’.
I haven't always enjoyed the works of FM Lilov (I found his earlier DVDs to be very patchy). However, I think he has found his niche with this release, which is the pick of the bunch of the DVDs reviewed this time. 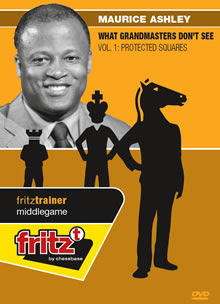 What Grandmasters Don't See
Volume 1: Protected Squares
By GM Maurice Ashley
4 hours and 18 minutes
ChessBase
Last but not least, the effervescent Grandmaster Ashley is let loose on another new series. The subject is ‘Protected Squares’. The theme is '...blunders on squares which are protected by pawns: how top players make such mistakes and how the viewer can be trained to avoid such errors'.
It’s not just a collection of Grandmaster moves that just happen to place a piece en-prise to pawn; the blunder in question could be a square which looks well protected until reality hits home. This is best demonstrated by a positon from the DVD. 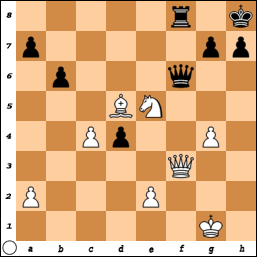 Bareev – Timman
Leon Rapidplay 2008
Black has just played 29 …cxd4 which looks reasonable at first glance. However, it is a blunder; the g6 square isn’t as well defended as meets the eye. 30 Ng6+ and White wins easily (30 ...hxg6 31 Qh1+).
There are 19 video lectures followed a series of tests to enable students to test their knowledge. There’s an impressive amount of examples featuring some of the very best players in the world, such as Carlsen and Kramnik. There’s an attempt to explain how even World Champions can miss easy moves, with a discussion on the nature of blind spots.
For instance, how is it that Kramnik can head straight into the following position and miss the fairly simple twist at the end? 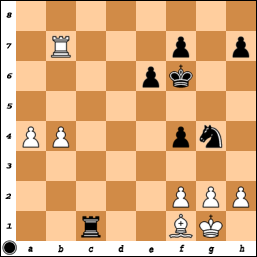 Kramnik – Anand
World Championship Final 2008
34 …Ne3! It turns out that the e3 square for White, and e6 for Black area particularly common ones for blind spot activity.
GM Ashley's personality is well to the fore on this DVD. Here's a typical quote which leads into a sample of play from his favourite player, Mikhail Tal.
‘The position we’re about to go over now still gives me a headache, every time I look at it. It’s like going on a rollercoaster and just being whipped left, right, up and down, underground, fifty feet in the air, back down crashing…it’s like…it just makes your head spin.’ 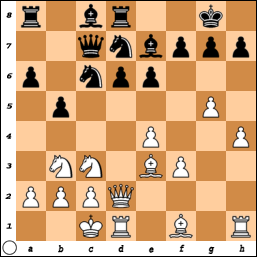 Tal – Koblencs Riga 1957
The fun starts with 15 g6. This game requires a longer video than the average (just over 19 minutes as opposed to just over four).
The enthusiasm of the presenter makes this an engaging viewing experience. However, I still prefer the Lilov DVD as I found the majority of GM Ashley's examples a shade too much on the familiar side.
Nevertheless, club players will learn a lot from this DVD and should have fun at the same time, which is generally perceived to be a good combination.
Meanwhile, the Marsh Towers postman has been busy again and the next set of reviews is already in the pipeline, so stay tuned...
Posted by Sean Marsh at 08:10