The Sniper
By FM Charlie Storey
175 pages
Everyman Chess
I have known FIDE Master Charlie Storey for a long time. We first played each other back in 1987. I was very pleased to find out that he was writing a book on a system he had been developing over a number of years. Now the book is available and the message is loud and clear: ‘Play 1…g6, …Bg7 and …c5!’

One of the first things to note is that a new name has entered the catalogue of chess openings:

‘Incidentally, I’ve called this system ‘The Sniper’ because the f7-, g6- and h7-pawns look like the ‘V’ support for a Sniper gun as used by British and American militaries. Furthermore, the g7-bishop and its influence on the long diagonal represent the gun part, combining with the c5-pawn to attack the d4-point.’

As fans of The Lion will tell you, a catchy name can encourage a certain dedication and develop a minor cult following. Charlie has certainly been devoted to The Sniper and easily passes one of the big tests of those aspiring to create a worthy opening book – does the author practice what he preaches? Not only does Charlie habitually play the first three moves in question, he does so at all levels. Achieving 4/4 – and a rating performance of 2600 – at the 2009 British Championship was a particularly noteworthy milestone.

The material is presented over the course of seven chapters:

White Grabs the Centre with 3 f4

Other 1 e4 Lines for White

A big shot in The Sniper comes after the Bishop on g7 gets a clear view of the Knight on c3. This is an attempt to overturn stereotypical thinking; it’s not so easy to think about trading the Bishop after it has gone to g7, as practitioners of the Sicilian Dragon and King’s Indian Defence will doubtless confirm. Yet playing the unusual, the unexpected is a trademark of Charlie’s. In the specific case of …Bxc3(+), White’s pawns are shattered and opponents, with some sort of inherent race memory flagging up that Black’s plan suffers from a bad reputation, can become confused when thrown back on their own resources.

Can White merely avoid the unknown and transpose into main line openings? Chapter 1 addresses the issue of how to avoid heading into the main line Sicilian Dragons. A key illustrative game shows one of Charlie’s junior students confusing a Grandmaster and picking up a valuable win. 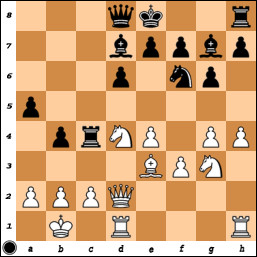 ‘17 moves in and Black has pressured the centre and expanded on the queenside. The pressure of the extra attacking move gained by not castling has actually had an exponential effect on Black’s queenside counterplay and could be held responsible for ‘wasting’ the knight’s time moving from c3-e2-g3, thus engineering a major strategical error in White’s plan which in turn brings about Black’s eventual win.’

Black did eventually castle - on move 20 – and won on move 45 with his King enjoying much more safety than is the Dragon norm.

There are a couple of other ways to avoid the pure Dragon, which can be found in the book. There’s also a special section looking at the Dragon skills of Magnus Carlsen.

There’s no doubt that the author has worked hard on his system and has shown admirable diligence to re-examine older games to unearth improvements. Watch out for a very interesting piece of analysis on the old Pterodactyl (1 e4 c5 2 Nf3 g6 3 d4 Bg7 4 Nc3 Qa5), pioneered by GM Raymond Keene and IM Lawrence Day.

Readers are encouraged to appreciate the differences in two possible move-orders for Black, namely 1 …g6, 2 …Bg7, 3 …c5 and 1 …c5 2 …g6 3 …Bg7. White has extra options depending on which method is adopted by Black.

Against 1 d4 2 c4, players, there are two main ideas of interest. One recommendation is for Black to play the ‘Bermuda Triangle versus the White Arrow’. 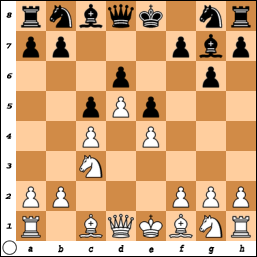 Black has a number of plans here, including the pawn breaks …f5 and …b5 (after suitable preparation).

Another surprising line which has hitherto managed to slip between the cracks of theory is included in the Sniper’s store of ammunition. 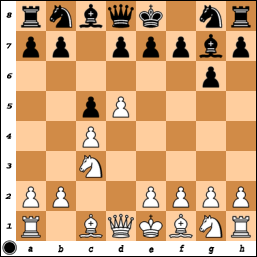 Black will follow up with …Qa5 and …f5. Unprepared players with the White pieces will have a hard time sorting out the best way to proceed when they are caught off balance by 4 …Bxc3+. Indeed, the surprise element is a key factor for snipers. I like the unexpected pawn sacrifice which occurs in this position… Black is now advised to break the bind with a pawn sacrifice, 8 …b6. Charlie makes a great case for this idea in the book, comparing it to the Benko Gambit. It reminds me more of a line from the Advance Caro-Kann… 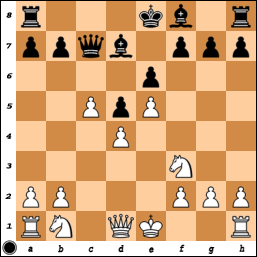 …in which 11 …b6 has similar intentions.

There are 70 illustrative games, some of which have avoided being included on well-known databases. Themes and ideas are giving greater priority than the desire to detail a move-by-move repertoire. Indeed, players wanting to forge The Sniper into an all-embracing Black repertoire will still find they have some work to do. For example, coverage of the English Opening is confined to a single game snippet and there are one or two more divergences from the book’s material which will require independent analysis.

It is clear that FM Storey has worked very hard on The Sniper (both the opening and the book). It looks set to be one of the most interesting opening books of 2011.

With The Sniper currently flying high in various ‘best seller’ lists, apprentice marksmen are advised to get up and running as quickly as possible to avoid being left behind.

It’s important to remember that The Sniper as a concept is still a ‘work in progress’. The development of the system should accelerate now that Charlie’s analysis is out in the open. I was in the fortunate position of being able to ask The Sniper’s chief Commanding Officer about his manual and future plans. Tune in again tomorrow to read all about them in our exclusive interview.
Meanwhile, for further details of 'The Sniper' and all other Everyman Chess books, pop along to their official website.
Posted by Sean Marsh at 01:08

I am really looking forward to read the follow-up! It would be great to have a Sniper 101 in the same format as, say, "A Universal Weapon 1.D4 D6": I love the three step approach with "Quick Repertoire" section, followed by a thorough theoretical and practical study in the section "Step by Step" and finally a "Complete Games" section.

I don't understand why new names are proposed when these are well established lines of the Pterodactyl, Schmid Benoni and others that have been written about since the 1980s. I have played them extensively, written about them at chess.com, taught them to advanced students and even have a YouTube video on them. I look forward to seeing the book, but new names are not needed.

Eric, didn't you have plans for an eBook on the Pterodactyl?