Your Best Move
Per Ostman
222 pages
Everyman Chess
Subtitled ‘A structured approach to move selection in chess’, this book aims to provide ‘…a process to guide us in our ultimate search to find the best move’.
Chess teacher Per Ostman, influenced by GM Kotov’s classic works ‘Think Like a Grandmaster’ and ’Play Like a Grandmaster’, has spent ‘…years of searching and thinking’ on the problem and has decided ‘…it is time for me to share it with the chess community and let next runner take over the torch’.
The author defines the three essential building blocks required to find the best move, namely process, skills and knowledge. The material is presented in five main parts:
Process
Potential
Candidate Moves
Knowledge
Skills
Preparation
Each part is split into sub-sections, with charts sitting side by side with illustrative snippets from real games.
It’s an attempt to present an ideal template to guide one’s thinking skills into making a good decision when selecting a move. For example, when it comes to ‘Process’, the steps are given as: ‘Update’, ‘Select’, ‘Verify’, ‘Check’, ‘Execute’ and ‘Prepare’. This takes into account all of the phases which, in the author’s opinion, need to be taken into account. ‘Update’ starts with the information received from observing the opponent’s move and the steps in between are self-explanatory. ‘Prepare’ requires analysis during the opponent’s thinking time, in anticipation of the next ‘Update’.
The section on ‘Knowledge’ is the closest the book comes to being a regular primer, offering numerous instructive snippets. This part could be read as a series of mini-lessons. Here’s a simple example of ‘Knowledge’ in action: 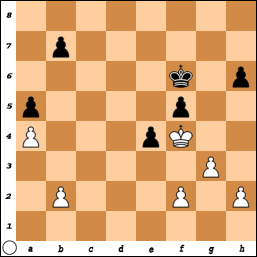 1 h4? draws; 1 h3 reserves a pawn move in the tempo-game and White wins.
There’s also some advice on more obscure subjects, such as the physical side of things and how to approach a game against opponents rated significantly higher and lower.
It’s a ‘wordy’ book, best suited to people who are more interested in learning about the thinking process in chess than the latest developments in popular openings.

The Blackmar-Diemer Gambit
By IM Christoph Scheerer
336 pages
Everyman Chess
The Blackmar-Diemer Gambit (1 d4 d5 2 e4) is an opening which enjoys a cult following but it has never been popular with the masses. Nevertheless, there has been plenty written about it, as the bibliography to this new book makes clear.
It is easy to see the appeal. White sacrifices a pawn, opens up a line or two and then seeks to deliver checkmate at the earliest opportunity. There are obviously downsides to the Blackmare-Diemer, otherwise everybody would be playing it. The author doesn’t claim that it is anything like a forced win for White (a refreshingly honest stance) but merely concludes that it is ‘….an uncompromising opening system with chances for both sides…’
At 336 pages, this is the largest of the offerings in this column. IM Sheerer leads the reader through 13 gambiteering chapters. He claims it is not a repertoire book or a complete guide, but rather it is ‘…meant as a stimulus to kindle an objective debate about the Blackmar-Diemer, and to introduce the opening to players who were previously unaware of it…’
There’s some interesting historical snippets at the start of each chapter, giving the background to the naming of variations such as The Lemberger Counter-Gambit and the Langeheinicke Defence (good names to drop down at your chess club) but the text itself is a shade variation-heavy (although there are useful, succinct summaries at the end of each chapter).
There’s no shortage of great attacking chess, but one stubborn Black defence continues to cause the biggest headaches for White.
1 d4 d5 2 e4 dxe4 3 Nc3 Nf6 4 f3 exf3 5 Nxf3 c6 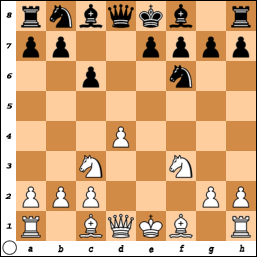 The Ziegler Defence. White can continue with 6 Bc4 Bf5 7 0-0 e6 and now the older 8 Ne5 is examined, but falls short. The attention switches to 8 Ng5 – ‘The Alchemy Variation’. 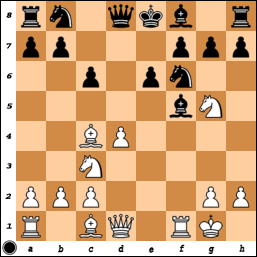 Nine pages of analysis are given, with White having to accept he will remain a pawn or two down for some unclear attacking chances. As the Ziegler Defence is often quoted as being Black’s best defence, readers should be aware that they are likely to find themselves facing it on a regular basis, so this chapter requires very careful reading.
One thing to note, especially if you are considering using this book as a basis for a repertoire, is that all of the lines stem from 1 d4 d5 2 e4 dxe4 or 1 d4 Nf6 2 Nc3 d5 3 e4, so a certain amount of background reading will be required to work out what to do if Black declines the gambit (2 …e6 and 2 …c6, in particular, must be catered for).
Blackmar-Diemer players will definitely want to add this book to their chess libraries but it’s probably a little bit too densely plotted to attract casual 1 d4 players looking to pick up an occasional weapon with the minimum of study.

A Ferocious Opening Repertoire
By IM Cyrus Lakdawala
304 pages
Everyman Chess
The backbone of the repertoire is the Veresov (1 d4, 2 Nc3). It’s never been a popular way of playing, despite the occasional flurry of interest (usually following the publication of a new book). It doesn’t have the buccaneering style associated with the Blackmar-Diemer and other cult openings. Creating a 'ferocious repertoire' around 2 Nc3 is quite a task – but IM Lakdawala does have a go.
The introduction tells how the book was commissioned by dint of confusion surrounding numerous Veresov games on a database. The games were in fact played by the brother of the author (‘I, on the other hand, had not played a single Veresov in my life’), Nevertheless, the commission went ahead and this big book is the resulting product.
The book begins with the better-known Veresov lines, 1 d4 Nf6 2 Nc3 d5 3 Bg5 Nbd7 4 f3 and 4 Qd3, plus other defences for Black after the initial couple of moves. To provide a full repertoire for White, chapters are included to cover transpositions to the French and Caro-Kann and the Dutch, Modern, Pirc, Philidor, various Benonis and other odds and ends.
The author makes an early apology for his ‘…occasional overly-goofy tone’.
‘It’s actually a mystery to me why most chess books are so formally written, as if the readers are Amish elders rather than the goofs and nerds most of us are! Besides, I can’t help it. The dangerous combination of Jimi Hendrix and Buddhist chants blasting away on the CD player while I write induces such outbursts!’
As promised, there is levity throughout the book. I find such an approach somewhat juvenile.
Referring to his brother Jimmy’s rise through the ranks ‘...without ever studying a single chess book!’ he claims it as ‘A feat only the young Capa matched’. This is shortly followed by a comment saying that: ‘Besides Jimmy, the other founding fathers of the opening were Savielly Tartakower…’ Elsewhere, the author’s own Internet blitz games rub shoulders with serious games played by the likes of Botvinnik.
One presumes the author’s tongue is placed firmly in his cheek, but there is a fine line which must tread extremely carefully: is the author taking his work seriously and if not, should the reader?
White’s two main options contrast in soundness. 1 d4 Nf6 2 Nc3 d5 3 Bg5 Nbd7 4 f3 can lead to mayhem such as this: 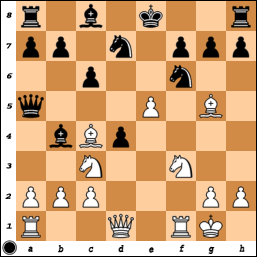 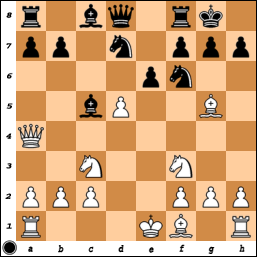 The main illustrative game features a bad blunder by Black with 9 …Bxf2+?? Two alternatives are given in the notes: one is a blitz game and the other a line of analysis. There are improvements in both lines:
9 …Qb6 10 0-0-0 Bxf2 11 dxe6 fxe6 and White’s edge comes against the weakness of e6. 11 …Qxe6 is mentioned, but the Queen apparently ‘…gets kicked around’ if she takes on e6. Is that really going to be the case, and if so, is it going to end up worse than passively watching the e6 pawn drop off?

9 …exd5 10 0-0-0 Nb6 11 Qh4 Be7 12 Bd3 h6 13 Bxh6 gxh6 14 Qxh6 Qd6 when ‘…Maybe Black survives, but I wouldn’t bet on it’. 11 …h6 improves on this line, calling White’s bluff. The compromised Kingside pawn structure after 12 Bxf6 Qxf6 13 Qxf6 gxf6 doesn’t seem fatal to me; Black’s Bishops look potent.
Trying to cover such major topics as the French Defence as part of a repertoire is always going to be tricky, especially as White is clearly committed to lines starting with 1 e4 e6 2 d4 d5 3 Nc3 (by transposition). Against the Winawer, the author recommends (3 …Bb4) 4 exd5 and the Classical is met by (3 …Nf6) 4 Bg5 Be7 5 e5 Nfd7 6 h4 – the Alekhine-Chatard Attack. Minor lines are given short shrift, for example: 5 …Ne4 6 Bxe7 Qxe7 7 Nxe4 dxe4 8 Qe2 ‘…a key move which comes close to a refutation of this line…’ and now looking only at 8 …Bd7, neglecting the more common suggestion of 8 …b6.
I ended up feeling unconvinced by this book and would recommend that readers apply some judicious cross-referencing with other works to bolster and/or replace parts of the recommended repertoire before trying it out in their own games.
For further details regarding all Everyman chess books, pop along to their official website.