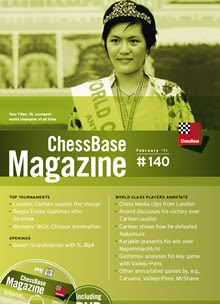 ChessBase Magazine #140
The new issue of ChessBase has broken ranks with it's recent predecessors and changed the colour of it's magazine. It makes it easier to spot on the shelf but the question is, will this colour stay for the whole of 2011?
.
The magazine starts with a thoughtful editorial from Andre Schulz, drawing attention to the lack of spectator interest shown at top tournaments:

'There are magnificent tournaments out there – but nobody goes to them. The world’s best players appear – and nobody is interested.'

However, some events have gone some way to reversing the trend:

'The latest example of really successful presentation for a chess tournament is the London Chess Classic. So anyone who wants to know how to promote chess successfully can ask chief organiser Malcolm Pein, who made a brilliant debut last year and even went on with his helpers to surpass themselves this year.'

Indeed, coverage of the London Chess Classic is absolutely first class and is the biggest highlight of issue #140. The games have expert analysis with substantial input from the players themselves. Even better – authentic audio streams from London, featuring the voices of the players and other expert commentators (including Korchnoi) are included and they run for a total time of over six hours.

Here’s a couple of positions from London to whet the appetite. For the full stories behind the games I can recommend careful study of the material on the ChessBase DVD. 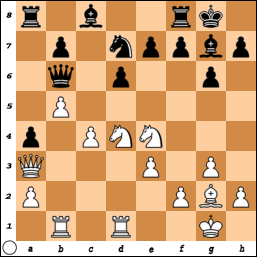 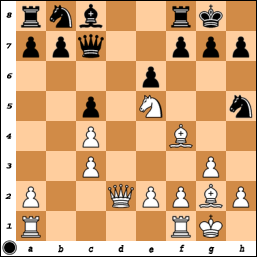 Of course, playing a pawn to g5 isn’t always the best move… 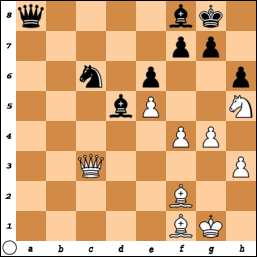 Other notable features include coverage of the Women’s World Championship, the Russian Championship and the tournament in Reggio Emillia.

Hou Yifan became the youngest of all Women’s World Champions and she annotates a key game from her ascent to the top of the chess world.

The openings surveys are a popular part of the the magazine and this time they cover:

There are other opening surveys in the form of Fritz Media Training and these are:

Chess magazines are going through a tough time at the moment. It’s hard to find an ideal balance of material to appeal to the majority of readers, especially as games can be followed live all across the globe. However, the first issue of 2011 confirms, without a shadow of doubt, that ChessBase Magazine is still a first class product, holding its own as a perfectly valid - and, indeed, important - chess product in spite of the worldwide information boom. 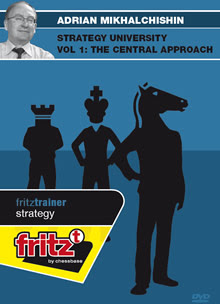 As is customary with this particular presenter, the games mainly feature classic players, such as Polugaevsky, Botvinnik, Rubinstein and Fischer. The illustrative games are well chosen and they clearly demonstrate the selected topic.

There’s a temptation, having set up a very nice pawn centre, to sit back and try and quietly improve one’s position. GM Mikhalchishin demonstrates several examples which show that the opposite strategy can be much more effective. 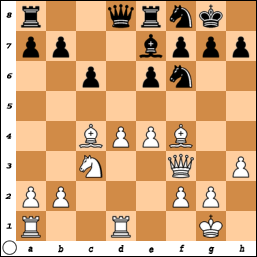 I'm sure most of us, playing White, would be tempted to sit on the advantage and not try anything bold. Rubinstein chose an alternative way, reckoning that the space advantage and excellently placed pieces give him every reason to play directly with 13 d5! after which he went on to win.
There are a couple of issues with the presentation. The speed of delivery, coupled with a heavy accent, may leave lesser experienced players (and/or juniors) feeling a little bit out of there depth. Secondly, the striped shirt causes an unfortunate strobing effect which can be distracting.

Nevertheless, the material is very instructive and experienced club players will be able to learn a lot from it. 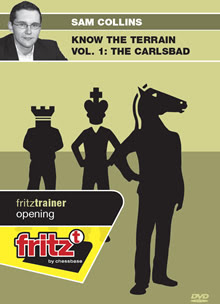 Know the Terrain
Vol. 1: The Carlsbad
By IM Sam Collins
Seven Hours
ChessBase
The second new series has a similar mission as the first. The chess student is diverted away from spending too much time on the openings and encouraged to get to grips with the finer points of middlegame strategy.

The specific aim of the ‘Know the Terrain’ series is to take a good look at important pawn structures arising from Queen’s pawn openings. The Carlsbad structure is certainly a very important one to study and this is by no means a brief overview. It’s one of ChessBase’s longest running DVDs; at seven hours, there is enough time for a massive 53 video lectures.

The easiest way into the Carlsbad structure is via the moves: 1 d4 d5 2 c4 e6 3 Nc3 Nf6 4 cxd5 exd5 A few moves further on, this familiar position can be reached: 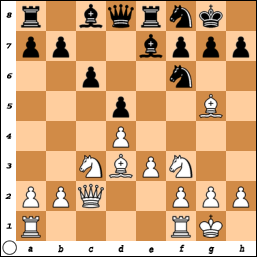 As IM Collins says, there are several plans to consider here.

White’s traditional plan is the minority attack, which involves pushing the b-pawn to attack Black’s Queenside structure, with the idea of timely swap resulting in a weakness or two in Black’s position. Playing in the centre with Rae1 and Ne5, or a quick e3-e4, or if White elected to place the King’s Knight on e2 instead of f3, then f2-f3 and e2-e4 is another possibility, as is the aggressive 0-0-0. Runs through all of the main plans and pays good attention to detail.

There are many options for the Knights manoeuvres on both sides and Black also has several decent options to either slow down White’s minority attack or react to it once it’s reached the Black Queenside. Each of these is examined in turn, using classic illustrative games.

One game famously features an unusual plan in a very important encounter. 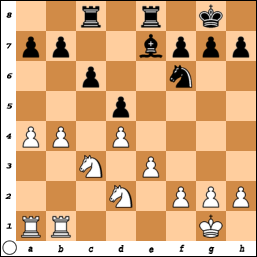 Korchnoi – Karpov
Game 31 World Championship 1978
19 a5 The presenter explains this as a natural plan to keep Black’s Bishop in a restricted state, but I feel there’s more to it in this particular case. 19 a5 is such an unusual way to play (most people would surely still have their minds set on b4-b5 at some point). I don't think Korchnoi's move has ever been fully explained (and I've read a lot of books on the 1978 match) so maybe it's something to return to at some point.

Endgames with various pawn structures evolving from the Carlsbad are also considered and there’s a brief look at how the Carlsbad can arise from openings other than the Queen’s Gambit Declined (such as the Slav, Grunfeld and Caro-Kann) and move orders in the QGD.

Sam Collins is a good presenter. His delivery is paced well and easy to follow, so even lesser experienced players will feel at home here.

This is a good DVD and it will be interesting to see where the series takes us next. Maybe an examination of the Isolated Queen's Pawn...? 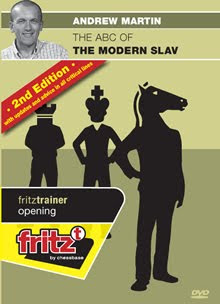 The ABC of the Modern Slav
2nd Edition
By IM Andrew Martin
5 hours
ChessBase
In IM Martin’s introduction, he bemoans the fact that, years ago, he lost many Slav games to the original version of Fritz and is dismayed by the fact that subsequent versions of the engine have continued to specialise in 1 d4 d5 2 c4 c6. This, he muses, is a possible reason as to why the Slav has become so popular over the last couple of decades.

This DVD focuses on the trendy 1 d4 d5 2 c4 c6 3 Nf3 Nf6 4 Nc3 a6. The 23 original video lectures have been joined by nine new ones (several from 2010), including a terrific win for Aronian against World Champion Anand - a good advert for any opening system. 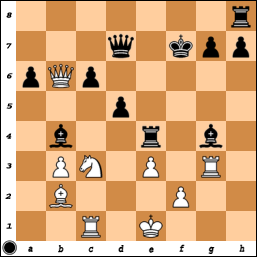 Anand – Aronian
Tal Memorial 2009
Anand didn’t get to play another move. After the Slav c-pawn advanced one more square – 25 …c5 – his position was so bad that he had to resign.

The conclusion of the update is that despite the advance in theory since the first edition was released, Black can still play the …a6 Slav with confidence.

For further details regarding Chessbase products, please visit the ChessBase website
Posted by Sean Marsh at 01:43