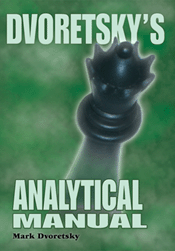 Dvoretsky’s Analytical Manual
By GM Mark Dvoretsky
Russell Enterprises
419 pages
GM Dvoretsky’s new book is a companion volume to his classic Endgame Manual. This time, he puts various aspects of the middlegame under the microscope but time and space is still found for endgame matters.
The target audience of a Dvoretsky book is never in doubt.
‘The book which lies before you is aimed first of all at helping strong players complete themselves. This ensures that it will overflow with exceptionally complex analysis and exercises which will be difficult for even the leading grandmasters to handle.’
The material is split into five main parts.
Immersion in the Position
The first chapter takes a look at various crucial moments, often featuring surprising twists which are only visible if one doesn’t merely scratch the surface, but actually gouges a big hole through it.
The following position, quoted by Tony Miles (players unknown), comes in for particular attention. 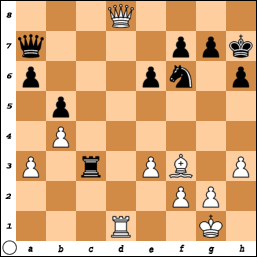 The analysis starts with the possibility of 1 Be4+ Nxe4 2 Rd7, and the Black Queen is in trouble. The position may seem reasonably understandable at first glance but Dvoretsky devotes the whole of an eight-page chapter to the initial investigation before following up with more advanced analysis, lasting a further 16 pages, in the very next chapter.
His concluding remarks:
‘…this chapter is filled with debatable problems. Some I do not know the answers to, and can only guess. How much effort may still be required before we can achieve a more or less accurate picture of the simple, natural position with which we stared?!’

Analyzing the Endgame
Studies are used in addition to Grandmaster positions to demonstrate various themes and to offer readers tough tests.
Dvoretsky likes to use studies as starting positions for training games, although he admits that good examples aren’t always easy to find.
Often they are used for entertainment or to train the mind to seek out the unexpected.
This is one of the simplest in the book, which is a good indication of the level: 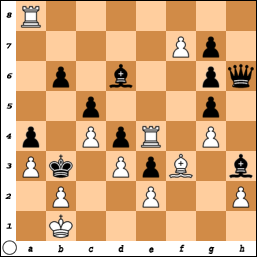 There are lots of surprises in the solution, starting with the first move (of seven), which is the zany 1.Ra5! Over to you, dear reader! Dvoretsky claims an alternative win starting with:
1 Ra6 (Incidentally, the lines associated with this study have a couple of rare typos, with the ‘b’ - as in ‘b-pawn’ - being inadvertently converted to a figurine Bishop)

The depth of analysis devoted to the full games in this chapter is staggering. The most impressive part is the coverage of the classic fifth game of the Reshevsky - Fischer match of 1961. The analysis lasts for 24 pages and is packed with quotes and analytical input form a galaxy of chess stars including Fischer, Kasparov, and Hubner. 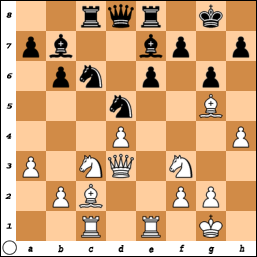 One comment struck me as a major difference between the training methods in our respective countries.

‘In May 2004, I held a training session for a group of young grandmasters in Dagomys (a Russian resort on the Black Sea), where the diagrammed position was replayed several times.’
It’s hard to believe that this sort of thing goes on in England. If it did, perhaps we would be challenging for higher honours at the top events. Some of the training games are given in the notes.

‘Is not it true that it is just this kind of game, in which both players ‘‘go for the throat’’, that becomes the sot of event that is still interesting to look at, a half-century later!’

Some of the deepest game analysis comes in this section. Two of the heaviest pieces of work focus on two very famous games at the highest level.

There are no fewer than 33 pages on the 21st game of the Karpov - Korchnoi 1978 World Championship match and 16 pages on game 1 of Korchnoi’s 1983 Candidates’ Match with Kasparov. Excellent use is made of quote and analysis from a variety of sources, some times with completely contrary points of view.

Emanuel Lasker comes in for special treatment too. Seven of his classic games are analysed in great depth in a section that runs to just under 100 pages.

The depth and quality of Dvoretsky’s work is consistently high till the very end. The final game is a 28-page analysis of the famous encounter between namesakes, culminating in a fascinating endgame. 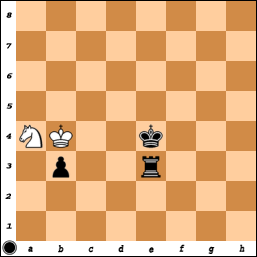 This is the position after White’s 98th move. A draw was agreed on move 103 and a new chapter in endgame theory had been written. Dvoretsky’s analysis, drawing on many sources, brings the game alive for the modern audience.

Throughout the book, there appears to be bit of an analytical battle going on with Garry Kasparov, with Dvoretsky targeting - and apparently refuting - the 13th World Champion’s analysis on numerous occasions.

This is a very impressive book of extraordinary depth. Very strong players will benefit the most from the material given. Lesser mortals will still find plenty of interest; beginners should definitely look elsewhere.

Production values are up to the usual high standard set by Russell Enterprises. Despite the high page count and paperback binding, the spine shows no sign of strain despite frequent use. The layout is very clear and event though there are far more variations than the average chess book, they are reasonably easier to navigate. A bibliography would have been useful, given the number of sources used and quoted.

Established Dvoretsky fans will definitely enjoy this volume; it might even be his best to date.

The great tournament at St. Petersburg in 1909 was especially noteworthy for the stunning display by Akiva Rubinstein and World Champion Lasker’s struggle to keep up with him. This he managed to do thanks to a last round victory.

Olms had a facsimile of the German edition in print a few years ago and I believe it is about to be reprinted, but this is the first time we have been treated to an English language edition in algebraic notation (a ‘New 21st Century Edition!’ says the cover).

The foreword is supplied by Tim Harding, setting the scene from a historical perspective. He makes the very interesting point that this was Lasker’s only major tournament between Cambridge Springs (1904) and St. Petersburg 1914. Lasker certainly did things differently to other players.

This is followed by a preface that is Lasker’s own. The ‘Program of the Tournament’ details the prize fund, time-controls and other such items of interest.

There’s a nice group photo of the players and the tournament crosstable, then it’s straight into the games.

It was a strong tournament. In addition to Lasker and Rubinstein, the likes of Schlecter, Tartakower, Duras and Spielmann were competing in a field of 19 well known chess stars.

Some of the 175 games from this tournament are very well known, such as this famous endgame: 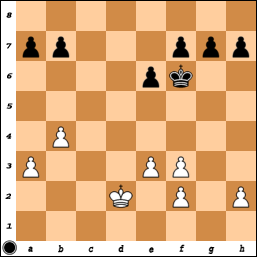 Rubinstein marched his King to h3 and gained a decisive advantage.

The big third round clash should also be very familiar to readers: 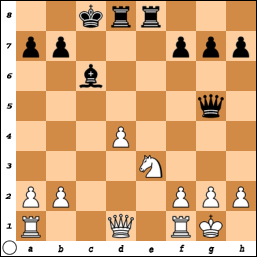 Black’s position looks fine and he appears to have serious threats against the White King. Lasker is full of praise for Rubinstein’s subsequent play.

The notes are quite light, but are all in keeping with Lasker’s legendary ‘common sense’ style. 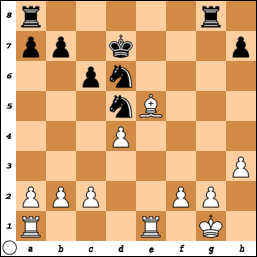 ‘On one side Black attacks the king, on the other the pawns, while White’s pawns are unable to exert any counter pressure. Hence White is lost, though having three pawns for the piece, as Black’s king deprives the white pieces of their mobility whereas the white king is a mark for attack. The case would be different if no rooks were on the board.’
0-1 (52)

The most popular openings at the tournament were the Queen’s Gambit Declined, Ruy Lopez and French Defence but there’s also examples of rarer openings such as the Vienna Game and Ponziani. There’s even a Modern Defence, as played by Znosko-Borovsky.

With every single game annotated by the the Second World Champion, this is a very welcome addition to one’s collection of tournament books and it comes just before the centenary of this important event. 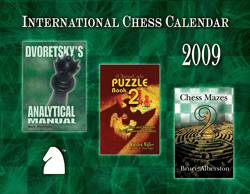 Forget all those dreadful calendars of soap ‘stars’ and z-list ‘celebrities’ that fill the shops. This is the ideal one for visitors to Marsh Towers.

Rare photos, historical snippets and games feature on the pages for every month.

January 2009 marks 50 years since Bobby Fischer retained his US title. Later in the year we see that it was 50 years ago that Tal qualified to play Botvinnik by winning the Candidates’ tournament.

Every day has listings of births and deaths of famous chess players and occasional historical highlights too. It is easy to tell at a glance that Alexander Alekhine was born on Halloween and that Emanuel Lasker came into the world on Christmas Eve and you can see how old your favourite Grandmasters really are. (By coincidence, I see that today's date is the birthday of Akiva Rubinstein)

This is the only calendar I’ve ever seen that features a bibliography.

Chess folk are often accused of finding it difficult to get themselves a date. Now they can have plenty, with a 12-month guarantee. This calendar belongs on the wall of every chess player.

For more on books from Russell Enterprises, pop along to: