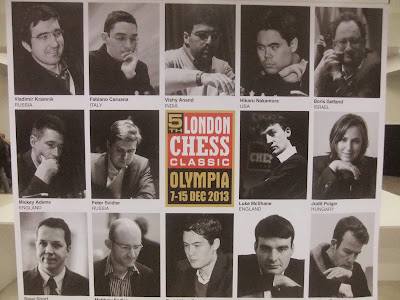 I have already covered CSC Teesside's trip to the Classic (in part one and part two) but here are some concluding thoughts on the event as a whole. The variety of activities was amazing. Certainly, the main focus of the week fell on the Super 16 Grandmaster tournament, but there was so much more happening than that at the festival of chess.

The Education Conferences made for a very important addition to the Classic (I already covered them, here). There's no doubt about it; such conferences need to be a regular feature at the Classic. The international trading of teaching ideas and missions will definitely represent a major step forward for the Chess in Schools and Communities charity.

Juniors were mad every welcome at the Olympia. School events ran throughout the week and were very well attended. Numbers should increase even more as the CSC continues to expand. Indeed, more big plans are imminently afoot, with the launch of the Yes 2 Chess project, sponsored by Barclaycard. Further details will appear here soon. 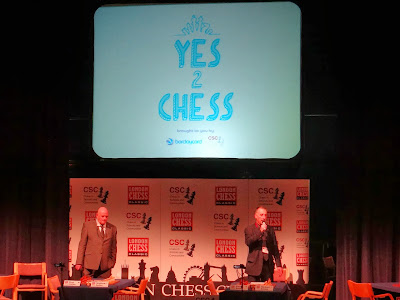 The Classic doesn't just provide excellent playing conditions for the juniors. The coaching sessions are instructive and fun, run by professionals including Grandmasters.
The list of other events makes impressive reading and includes the FIDE Open, the Women's Invitational, weekend tournaments and Rapidplay events. There were simultaneous displays too; popular events in which a Grandmaster takes on a number of people all at once.
The Super 16 tournament featured some of the finest players in the world, including two former World Champions: Vishy Anand and Vladimir Kramnik. It always fabulous to see the elite players in action, although I didn't have much time to follow the games this year, as I was too busy with my party of juniors. I did manage a few quick photos at the start of one of the rounds. 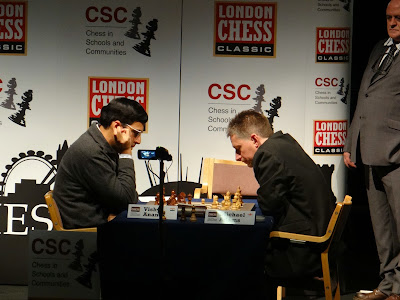 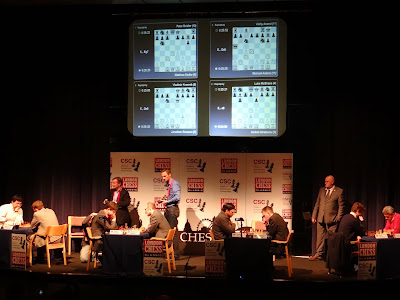 Hikaru Nakamura beat Boris Gelfand in the final of the Super 16. He had the worse of it in the semi-final with Kramnik but somehow managed to win the key game from an awkward position. Meanwhile, Gelfand had ended all hope of a British Classic champion in the other semi-final when he defeated Michael Adams with a cunning trap after Adams had looked the more likely winner.

Of course, the Classic tournament is not usually held on a Rapidplay basis; full-length games were used for the first four events. It remains to be seen whether or not the experiment will be repeated next year (if there is to be another Classic; we should never take anything for granted).

For further details, scores from all of the events and games to replay, head for the official London Chess Classic website.