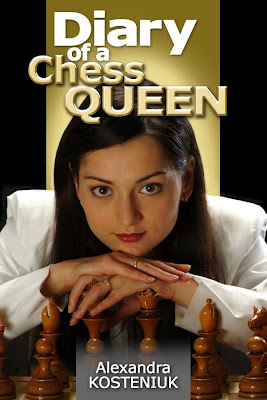 Diary of a Chess Queen
By GM Alexandra Kosteniuk
244 pages
Mongoose Press
The book begins with a very good foreword by GM Anatoly Karpov, in which he gives his opinion of the author and highlights various similarities in their respective lives and careers; not least the fact that they were both the 12th World Champion. There is a photo from 1990 showing Karpov signing autographs, with a young Kosteniuk standing by the table. At the end of the foreword there is another photograph, this time showing them playing each other in a tournament game.
Kosteniuk won the Women's World Championship in 2008. This is her story, all the way from receiving her first chess set and board as a birthday present up to the start of her tenure as champion. The author's thoughts on women's chess (compared to men's), her fashion career, advertising deals, training and many other subjects are revealed throughout the book.
There is, of course, plenty of chess along the way, but there is also a whole lot more to this book than a showcase of memorable moments at the board.
'This book is not just a games collection; it is my attempt to describe the road I had to travel in order to attain the title of World Champion. In this book, I have attempted to share my secrets, my observations, my emotions, and my trails.'
The story is told in 11 chapters:
Those Wonderful Childhood Years
Elista - The City of Chess
School Days
Kremlin Breakthrough
After the Applause Died Down
The Conquest of Europe
Russian Gold
Career and Family
Return
Nalchik - The Ascent of Olympus
Being World Champion
Production values are very high for this book. Mongoose Press have done a very fine job. The layout is very clear and the book is really brought alive by an excellent selection of photographs. There are a lot of them, including a special colour section covering eight pages.
My favourite is the second colour photograph, showing the new World Champion sitting with her Father at the event's closing ceremony. Kosteniuk's face displays a plethora of emotions, including pride, contentment and excitement.
Indeed, the picture sums up what the book is all about; the human side of chess. Maybe women, generally speaking, are able to bring more emotions to the surface and the page when they write about chess - although make no mistake, she is an extremely competitive player.
There are 64 games (some of them are snippets; all are annotated). Here's an unexpected move from a game in the 2008 World Championship... 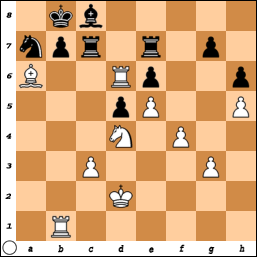 Kosteniuk - Cramling
Nalchik 2008
31 Bf1!
'I was very proud of this bishop transfer during the game.'
31...Bd7 32 Bh3 Nc8 33 Bxe6! and 1-0 (36)
'It's no secret that in such overwhelming positions, one often finds the winning combination.'
In an industry where ghost writers lurk in abundance, it was refreshing to read:
'I spent several months writing this book, and can take pride in the fact that every jot and tittle of the Russian edition was written by me personally.'
It's an enjoyable, attractive book. 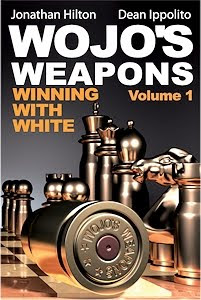 Wojo's Weapons
Winning With White Vol. 1
By IM Jonathan Hilton and NM Dean Ippolito
408 pages
Mongoose Press
GM Aleksander Wojtkiewicz died in 2006. This book explores and explains his favourite openings based around 1 Nf3 when Black replies with 1...d5.
Both authors are self-confessed who clearly hold their subject in high regard.
'We sincerely hope that this book proves useful to those looking to explore Wojo's white opening repertoire. We also hope that, through this project, we are able to preserve some of the vast legacy left to the chess world by the genius that was Aleksander Wojtkiewicz.'
We could argue about the use of the word 'genius' all day long (I find it a little strong for a jobbing Grandmaster) but it makes more sense to turn to the chess content of this volume.
Introduction: The 'Wojo System'
The Closed Catalan
The Open Catalan
The Slav Defense
Black's Other Defenses
The Catalan sections are the real meat of this volume. There are copious amounts of sensible, instructive prose to be found in between the 75 illustrative games (approximately half of which feature Wojo himself). The game annotations themselves are excellent; not overdone in terms of variations, they genuinely get to the heart of the action. There are frequent summaries and conclusions after the main sections to cement the lessons in the reader's mind.
I think the authors have worked to create an original work and they have not been afraid to head away from the beaten tracks of fashion. 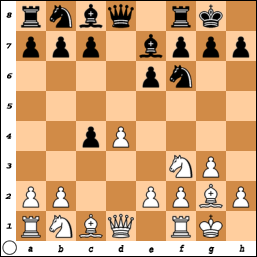 For instance, in this classic position of the Open Catalan, the authors eschew the common 7 Qc2 in favour of 7 Ne5.
'With this move, White opens the h1-a8 diagonal, putting a halt to Black's plan of ...a7-a6 and ...b7-b5, which would have freed his light-squared bishop after 7 Qc2 a6 8 Qxc4 b5 followed by ...Bc8-b7. Now, if White is allowed to simply recapture the pawn with Ne5xc4, he will achieve his aim of controlling the center. If Black wants to avoid getting positionally squashed, he must take advantage of the tempi `white is losing with his knight maneuver to radically open the board.'
The Catalan may not appeal to all players. Obviously, it best suits those who prefer a strategic battle, and this underpins the whole repertoire, with the first player steering the battle into territory he will know better than the opponent. Lovers of endgames will feel at home.
The other sections are less thorough. The Slav is met by 1 Nf3 d5 2 d4 Nf6 3 c4 c6 4 Qc2, avoiding mainline theory. The 'Other Defenses' covered are the QGA, The Tarrasch, ....Bf5 systems, the Chigorin and the Austrian (1 Nf3 d5 2 d4 c5). I think the reader will have to do some extra reading to pad out the analysis in these latter sections, but experienced club and tournament players should appreciate and enjoy the Catalan chapters.
I understand that work has begun on volume 2, which will feature (at least) the King's Indian and Grunfeld defences, again featuring systems involving g3.
I believe Mongoose are steadily making a serious impression on the world of chess books.
For more details, pop along to:
https://mongoosepress.com/newsite/ 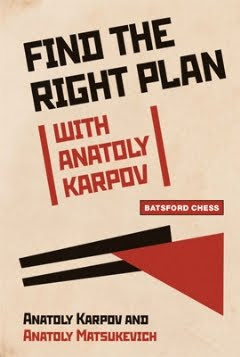 Find the Right Plan with Anatoly Karpov
by GM Anatoly Karpov and Anatoly Matsukevich
256 pages
Batsford Chess
'How can you find your way in every situation, even those that are completely unfamiliar, and how can you choose the correct order of actions to accomplish the main task? How can you learn to distinguish important features from secondary ones, and if you've managed to do
this, what do you do next?'
Good questions.
'Our book is about all of this.'
...and it comes in seven chapters:
With the sources
Evaluating a position. Reference points
The attractiveness of a concrete goal
Reference point - Open lines
Pawn structure. Weak and strong squares
The centre and space
The most important law of chess
Chapter one deals with some history; the next two deal with what the authors 'the key' and then there are three featuring the key principles at a more advanced level. The final chapter centres around domination.
Some of the chapters present a 'golden dozen' of miniature games (12 moves in this case) and a 'golden dozen' of chess studies. Nice though these are, I'm not entirely sure how they are connected to the formulation of a plan.
A lot of the annotations are too light to serve the intended purpose. Yet when more time and space is given, the notes can be very instructive. I thought the material about pawn structures was some of the best in the book, especially the discussion about the Carlsbad structure.
How much involvement did Karpov have with this book? Minimal, I'd say; some of his games are used for illustrative purposes but it seems to me that the other Anatoly wrote the book. Perhaps a book written about the planning involved purely in Karpov's own games would have been more to the point.
This book would suit keen club players, but more experienced ones will find a lot of the material familiar. German readers may find some it even more familiar thanks to an earlier work, 'Stellungbeurteilung und Plan', by the same authors. First published in 1987, it had a new edition by Olms 20 years later.
Nevertheless. there's plenty of fine chess here and it's a good collection of snippets instructive positions (especially for coaches). On the whole, I found this to be a good source of chess entertainment, ideal for dipping into, rather than a step-by-step guide to formulating plans.
Here's a position for you to think about: 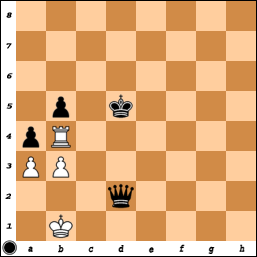 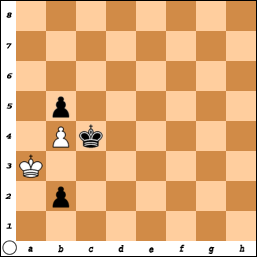 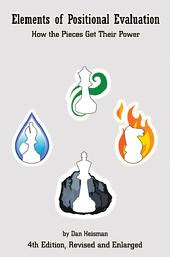 Elements of Positional Evaluation
How the Pieces Get Their Power
by NM Dan Heisman
4th Edition, Revised and Enlarged
216 pages
Russell Enterprises
This is a new edition - much expanded - of a book first produced in 1974.
'We will attempt to show that the evaluation theory of 1974 needed to be enhanced. We will not only present the new theory, but also prove the deficiencies of the 1974 theory and sprinkle discussion of how 2009 theory more closely follow the new. Many new examples will be provided to help illustrate these points.'
The material is presented over the course of seven main chapters:
The Background of Positional Knowledge
The Elements
Psueudo-Elements
The Pieces in Relation to the Elements
Static Features and the Elements
Miscellaneous Applications of the Theory
Epilogue
Starting with a reexamination of the author's thoughts from 1974, he
goes on to highlight where the material is now showing its age-induced inadequacies.
He then discusses the change of the elements following the major advances made in chess over the subsequent 35 years. Essentially, he opines that a lot of the old assessments and evaluations of positions were fine when dealing with static elements, but modern chess has developed into a much more mobile and dynamic set of elements.
Here's a pertinent snippet to show how chess thinking has developed over the years due to the greater appreciation of the dynamic element. 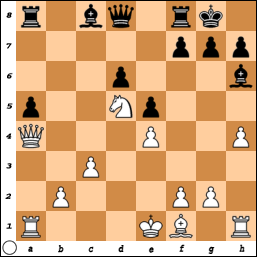 Grischuk - Carlsen
Linares 2009
'In this position, typical of the Sveshnikov Variation of the Sicilian, it appears that White has a large advantage due to his outpost knight on d5, Black's isolated pawn on the semi-open a-file, and the scattering of the Black pieces on the edge of the board. However, not only does Black have the bishop pair, but all his scattered pieces are fast - he does not have any slow knights that are hovering on the edge. Therefore, the dynamism of the black army is much greater than it appears, and Black can quickly act on most parts of the board. Chances are therefore much closer to equal than might appear.'
It's a well written book, with plenty of prose to get stuck into. Yet I found little in the way of groundbreaking material. Nevertheless, this is another useful volume for studious club players.
For more on Russell Enterprises, please go to:
http://www.russell-enterprises.com/
Posted by Sean Marsh at 01:02