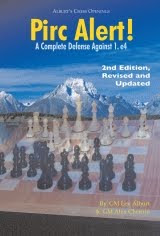 Pirc Alert! A Complete Defense Against 1 e4
Second Edition, Revised and Updated
By GM Lev Alburt & GM Alex Chernin
448 pages
Chess Information and Research Centre
W.W.Norton
Eight years have passed since the first edition of ‘Pirc Alert!’ and GM Alburt starts off by explaining the need for an updated version.

‘Referring to my co-author Alex Chernin, GM Alexander Beliavsky once said: ‘‘Alex’s files show theory as it will be in 10 years!’ ’ Indeed, Pirc Alert, based on those files, has stood the test of time. Still, eight years is eight years, and the time came to augment, and in some cases even to alter, Chernin’s 2001 recommendations.’

So what has been changed and updated?

Part one and part two of the book ‘required few changes’. Part 3, dealing with current theory, is the recipient of most of the updates and Alburt keeps the distinction between new and old material quite clear by using brackets for the updates.

With its use of colour and eye-catching design, this book is similar in style to ‘Chess Openings for Black, Explained’ (reviewed here: http://marshtowers.blogspot.com/2009/04/chess-reviews-88.html )

There are three main sections, namely:

About This Book, by GM Lev Alburt

Theoretical Variations, by Chernin and Alburt


Here's an overview of what's on offer.

About This Book, by GM Lev Alburt

‘This book is intended to be different from the array of other works that give a complete repertoire against 1. e4. Our book will contain every secret the leading GM theoretician and practitioner of the Pirc has compiled over a decade of research. No theoretical novelty (TN) will be withheld from you.’

In the first part, GM Alburt tells how impressed he was with the opening erudition of GM Chernin. The latter taught the former the basics of the Pirc just before a key game in the 1990 US Championship.

Later on, when Alburt was thinking a suitable opening for a new book, his thoughts turned to Pirc and he was able to bring Chernin on board for the project. The triumvirate of authors was completed by the addition of Al Lawrence.

What does the Pirc have to offer? According to Alburt…

‘It’s completely sound, having been relied on by some of the best players in the world, including super-solid world champion Mikhail Botvinnik

It rewards ideas rather than rote memorization

It uses all the ideas so far developed in chess, from classical to modern

Its theory can be reduced for Black to a relatively small and completely understandable portion’.

This section is very strong on prose explanations regarding all aspects of the Pirc. There is also a chapter on the differences and merits of the Pirc move order compared to the Modern Defence (1...g6, 2...Bg7).

There is plenty of interest here, especially in the discussions about the various pawn structures. Depending on Black’s pawn break (…e5 or …c5) and White’s subsequent reaction to it, the structure can end up virtually identical to those found in other main line openings, such as the Ruy Lopez, Philidor Defence and Sicilian Dragon. This is typical of the approach throughout the book; the authors are genuinely trying to educate the reader and encourage deeper thinking rather just provide an information dump of unmanageable variations.

Excellent use is made of ‘Memory Markers’ and ‘Some Important Points to Look For’ which neatly alert the brain to important points by using way marking diagrams. To further engage the reader, these diagrams are printed in blue so make them distinct from the main text. Good summaries round up the salient points at the end of each chapter.

Considerable attention is devoted to an early e4-e5 thrust by White and it’s clearly something not to be taken lightly.

‘Provoking e4-e5 is a bit like sending a formal invitation to a thief!’

Even strong players can err when it comes to timing. 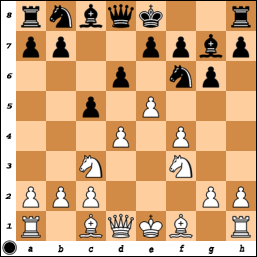 Bareev - Norwood
Marseille 1990
Norwood played 6...Ng4 and didn’t like the position. He later gave his move a double question mark. Bareev, who won the game in crushing style, had simply forgotten to play 6 Bb5+ before 7 e5, when d7 would not have been available for the Knight to retreat. As Chernin shows, Black should have embraced the opportunity to play 7...Nfd7

Theoretical Variations, by Chernin and Alburt

Naturally, one cannot (successfully) play chess openings by general ideas alone, so the final section provides specific variations for Black against all of White’s tries.

This material is split into five parts:

White Concentrates on His Center

Macho on the Kingside

…we reach a key position. 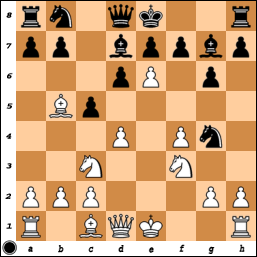 8...Bxb5 and 8...fxe6 are both analysed. The former is more ambitious but the latter is useful to know too. Seirawan made a particularly important discovery some years ago to diffuse aggressive White intentions. 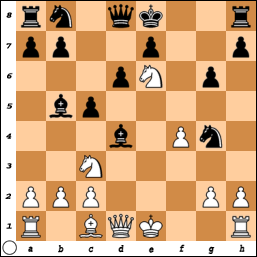 The universally recommended ‘150 Attack’ is another system Black must be prepared for. Here, the recommendation is to delay …Bg7 (saving a tempo in lines where White plays Bh6) and instead to adopt a multi-purpose little pawn move. 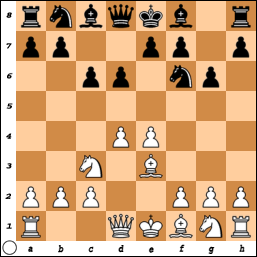 ‘Like White’s 4. Be3, Black’s pawn move has several purposes. On the one hand, it strengthens the center, specifically d5. On the other hand, it prepares …b7-b5. The move …b7-b5 is valuable by itself - as usual, it threatens …b5-b4, undermining the defense of the pawn on e4, and prepares the pawn storm that can be` useful in case White castles long.’

Player profiles pop up regularly throughout the book, providing readers with a short introduction to some of the heroes of the Pirc Defence. These include Timman, Seirawan and even Pirc himself. The photos are welcome and help to make the book even more attractive.

This thought provoking book is certainly different from the norm. It’s not a quick fix solution to one’s desire to meet 1 e4 successfully; the student will have to work hard to get the most out of the 440+ pages but there is no doubt that a greater understanding of the Pirc - and chess openings in general - await the diligent reader.

For further details of these, and other chess books by W.W. Norton & Company, please visit:

http://marshtowers.blogspot.com/2007/12/chess-review-archive.html
Posted by Sean Marsh at 05:59