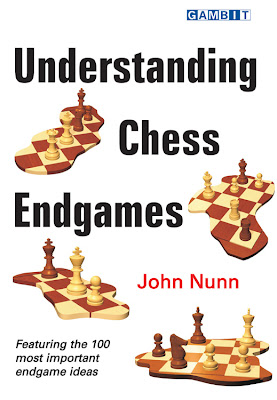 GM Nunn’s first line in the introduction is:

‘This book has an unusual genesis in that originally I didn’t intend to write it all.’

He goes on to explain that he was selecting examples for a chapter in a more complex endgame book when he realised that the chapter was becoming book-sized.

Given the depth of some endgame tomes, this distillation of the ‘100 most important endgame ideas’ into a single, manageable volume could be good news for club and tournament players, especially as one doesn’t require a great deal of prior knowledge to start on the material given here.

‘Readers are assumed to know a few things which are not explained in this book. The elementary mates with king and queen vs king, king and rook vs king and king and two bishops v king are not covered, although the more complex win with king, bishop and knight vs king is explained. Other than that, practically nothing is assumed.’

Serious thought has been given to the layout of the book to make it as user-friendly as possible. The endgame topics typically cover a double page spread, with a diagram at the top of each of the four columns and occasionally extra ones interspersed throughout the main text.

Lines of analysis are generally kept simple, which is a good thing. Succinct, prose comments are given for every example.

Here’s one of the more straightforward samples, from the section regarding an
‘Extra Piece’. 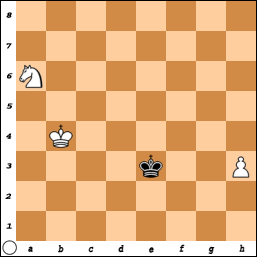 ‘When you have an extra piece, it often happens that the knight has to support a passed pawn in the absence of the king. In this case it is better for the knight to defend the pawn from behind. In the above diagram, White can only win by 1 Nc5! Kf3 2 Nd3! (2 Ne6? Kg3 3 Ng5 Kh4 is a draw) 2...Kg3 3 Nf2 and if Black takes the knight then the pawn promotes. White can then bring his king closer and win.’ 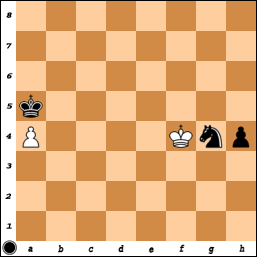 Azmaiparashvili - Korchnoi
Moscow (rapid) 1995
‘However, there is an exception with a rook’s pawn on the seventh rank. The game continued 1...h3? 2 Kg3 h2 3 Kg2 Kxa4 4 Kh1 draw. The position is drawn as any attempt to defend the h2-pawn with his king results in stalemate. Black could have won by 1.…Ne5! 2 Ke3 Ng6, securing the pawn further back. Then there is no stalemate and Black wins.’

Incidentally, it is interesting to force your chess engines to analyse positions such as the one above. It can take a while for them to appreciate that the advantage has become a mere illusion in terms of the hunt for decisive result.

The majority of the illustrative positions are from real games but occasionally a study is used to demonstrate an idea with greater clarity. 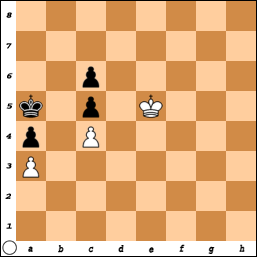 F. Sackmann
Deutsche Arbeiter Schachzeitung, 1912
‘If the enemy king is confined, it is sometimes possible to steal the opposition from the opponent. In the above diagram, there are three squares between the kings, and it is White to play, so theoretically Black has the opposition, but with a cunning manoeuvre White seizes it for himself.

Black has no choice but to concede the opposition, as the square he would like to move his king to (the one to the left of a5) is off the board!
1...Ka6 2 Ke6 Ka7 3 Ke7 transposes to the main line.

White must take care to approach the pawns at the correct moment. 3 Ke5? only draws after 3...Ka7!.

Step by step, the king approaches.

and White wins as Black loses both his c-pawns.’

I think club players will find the simplified explanations of good use. The analytical lines are kept short, thus preventing confusion during study. The examples have been chosen carefully and there's a real opportunity for the student to quietly absorb some very useful endgame information. 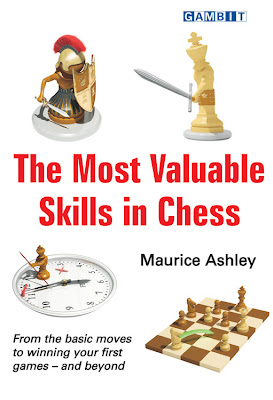 The Most Valuable Skills in Chess
By GM Maurice Ashley
159 pages
Gambit Publications
From the basic moves to winning your first games - and beyond
GM Ashley will be best known to most chess fans as the excited commentator on various chess DVDs. For some, his style of delivery is distinctly over-the-top. Others will find it fun and engaging. I know my chess juniors have always reacted well to his commentaries, spoken in a way that suggests he’s reporting from a worldwide cataclysmic event.

Fans of his audio style will be delighted to hear that the same sort of approach is applied to his written work too, albeit it in slightly lesser force.

‘It took a long time for the ideas you now hold in your hands to hit me over the head and insist that they be written’.

The ideas insisting to be included are split into two parts.

Along the way he advocates his TRIP method of defence, offering four ways to deal with a threat, namely:

There are puzzles to solve too. Some - especially those from the author's own games - should be new to most readers. 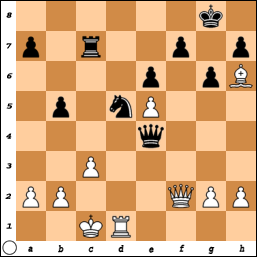 Ashley - Van Buskirk
Los Angeles 2000
‘My opponent had been torturing me for some time, and his last move, 29...b5??, was meant to carry out a big attack against my king. How did I manage to remind Black that both sides have kings to defend?’

Can you see a very strong move for White?


Part 2: The Fabulous Five: The Skills in Action

Part two examines five famous games, starting in 1858 with Morphy against the Duke of Brunswick and Count Isouard and reaching forward throughout time only as far as Spassky’s miniature against Larsen in the USSR v ROW match in 1970. 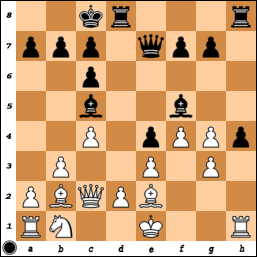 ‘Opening a direct route to the white king. If only White had an extra move, he could move his knight to c3, and then castle queenside. To paraphrase Shakespeare’s Richard III, ‘‘A move, a move, my kingdom for a move!’’ Soon the king will die on the battlefield.’

It’s entertaining - but strictly for beginners a chess coaches, who will be able to use the examples on their students.

http://marshtowers.blogspot.com/2007/12/chess-review-archive.html
Posted by Sean Marsh at 00:03