Garry Kasparov on Modern Chess
Part Three: Kasparov v Karpov 1986-1987
By GM Garry Kasparov
432 pages Everyman Chess
GM Kasparov’s books are always eagerly anticipated. Having analysed and assessed the games of his great predecessors and taken a look at the development of opening theory, he finally moved on to his extraordinary World Championship matches with GM Anatoly Karpov in last year’s volume.

This new volume is the second in the proposed trilogy featuring the titanic Kasparov - Karpov clashes and features their third and fourth title bouts.

The material falls quite naturally into four chapters.

The Year between Matches

The first chapter, covering 14 pages, sees Kasparov recapturing his noble thoughts of the time. At the age of just 22 he had high hopes of better chess world.

‘Now that I’d won the world title, I was determined not to abuse my position in a way that Karpov had done for many years, which was what, strictly speaking, I had accused him of. The fact that to a significant extent his power had been directed personally against me made me indignant, of course, but I was also sickened by the thought that in chess a future dictatorship was possible! The chess world was in serious need of rebuilding on a democratic basis, and this meant that the champion himself should not exceed his powers.’

There is also considerable discussion as to whether or not Karpov should retain his right to a return match. As chess fans, we should be relieved that such a match did indeed go ahead, but it’s easy top forget the advantages enjoyed by Karpov at the time and one can sympathise with Kasparov wanting to ensure his rival didn’t retain all of his off-board power.

Kasparov briefly describes what he had prepared for the 1986, with the Grunfeld Defence all set to take its place at the cutting edge of his Black repertoire. With hindsight, Karpov’s 1 e4 was already a relic at this point in history but Kasparov still had to ensure his Najdorf Sicilian was in full working order.

Paranoia and accusations feature early on in this initial chapter, with early doubt cast on the actions and motives of Vladimirov, one of the champion’s team of helpers. This surfaces again with more force in the second chapter.

Pages 19 - 237 are devoted to the third match. The first half was played in London and then the action switched to Leningrad from game 13 onwards. Kasparov took the lead and seemed to be coasting, but three consecutive wins in games 17 - 19 brought Karpov level, but the World Champion managed to stabilize and eventually win one more game to win the match by the narrowest of margins and retain his title.

I have special memories of the 1986 match. It was the first time I was able to travel to watch a game of a World Championship final live. I saw game 6, in which Karpov held an advantage as Black in a Petroff Defence.

All 24 games have been deeply analysed and, as usual for books in this series, the prose annotations thankfully outweigh the variations. This is important; not only does such a format make every single page the book extremely readable, but it’s also highly relevant to point to Kasparov’s emotional side. Recording his actual thoughts and feelings is more interesting than creating long strings of chess moves which few people will ever feel the need to play through.

The first game of the match, a short draw, is given five pages of analysis. This clearly sets the scene for what is to follow. Space is not a problem and the annotations have ample page sin which to breath. For example, Game 16, one of the most complicated of the match, fills nearly 27 pages. The notes to this game alone could keep a keen student busy for weeks. Here’s just one interesting moment. 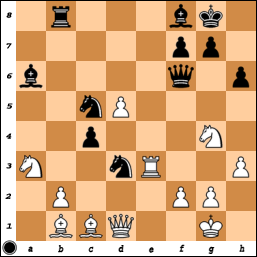 Kasparov - Karpov
Game 16
In this position, Karpov played 26...Qb6. Kasparov thinks he had a better move.

‘Thus with 26...Qf5! Karpov could have set me very serious problems. But this did not happen, and we effectively began a new game: left behind were all the opening tricks, the clash of plans and the ‘courteous’ exchange of pieces.

At this last moment of comparative calm before the brief concluding battle, let us try to assess the situation. Both sides have important trumps and the position is within the bounds of dynamic equilibrium. The time reserves are roughly equal, although not very great (what is an hour in such a tense situation?!). There is no question of relying here on a full variation analysis - the situations which can arise at literally every move are too unusual and complex. Positional guidelines are totally eroded, and the customary scale of values is displaced, since the two sides are attacking targets of different importance. Therefore the qualities that come to the fore are those such as intuition and enterprise, which means that to complain of bad luck is absurd, to say the least - everything is within one’s own grasp.’

Kasparov recalls that the Grunfeld of game one didn’t seem to surprise Karpov anywhere near as much he thought it should have done.

‘So, did my new opening come as a surprise to my opponent? Years later Sergey Makarychev, who was then one of the seconds of the 12th world champion, told me that, at any rate, several days before the match Karpov began preparing for the Grunfeld, explaining that there was a possibility it could occur.’

There is a lot of talk about traitors and spies in the camp. Of course, this is bound to be a biased account, or at least one lacking full objectivity. Nevertheless, it all makes for compulsive reading and, in a Kasparov book, the gossip is half of the fun.

The Year between Matches

This 37-page chapter describes relevant events between the third and fourth matches. This includes the ‘Birth of the GMA’, various other political episodes and an account of the over-the-board activities of Kasparov and Karpov. There are also three additional games between them, played at the Brussels tournament (two are blitz games).

Kasparov had a lot on his plate apart from yet another World Championship match and there’s no doubt his preparation lacked some focus.

‘But for me the match in Seville was psychologically the most difficult of all my five duels for the title with Karpov.’

‘On the whole, my preparations before the match were of quite an adequate standard, but, alas, my playing mood did not match them. In the end my confused condition generated a fear of defeat, which had a paralysing effect on me.’

This match did indeed prove to be a testing one. Kasparov arranged another opening surprise by using 1 c4 as his main weapon. Karpov had some ideas his own, especially against the Grunfeld. 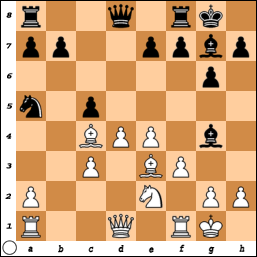 12 Bxf7+ - the birth of the Seville Variation
More secrets are revealed here. Kasparov was prepared to play the Pirc Defence is Karpov reverted to 1 e4, partly because his Classical System - 3 Nc3 and 4 Nf3 - is relatively easy to prepare against. Another surprise he prepared but didn’t get the chance to use was in this Queen’s Gambit position. 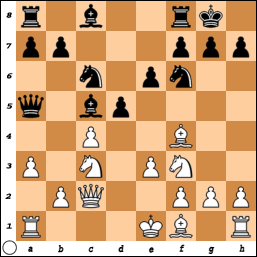 The prepared variation started with 10 0-0-0!
Amazingly, this remained behind the scenes until 1988. I remember seeing it played in the Speelman - Short Candidates’ match of that year; another game I saw live. At the time it looked brand new but then news filtered through that it had been played a couple of times already in 1988 (chess news travelled slowly in those pre-ChessBase days).

Meanwhile, Karpov held an early lead and after many adventures he was on the brink of winning back the title following an exciting victory in the penultimate game.

Incredibly, that win levelled the scores of the ‘championship marathon’. with just one game to go in Seville, both Kasparov and Karpov had won 16 games against each in other in title matches and 87 games had ended as draws.

Kasparov goes into considerable detail about his thoughts, feelings and preparation for the final game. He famously took his last chance, winning game 24 (despite giving Karpov a golden opportunity to virtually force a draw, with the latter missed), levelling the match and retaining his title the hard way.

This is easily one of the best chess books of the year and one which should top the shopping lists of all chess fans. With all of the stories, the analysis and the history, there really is something for everyone here. It’s one of the best of the whole Kasparov series of books.

It is fitting that I have been able to enjoy reading and reviewing this book one the same week that Kasparov and Karpov have making the headlines yet again with their nostalgia match in Valencia. Paris is the next venue on the list for the old rival so lets hope that London will be given a chance to host the battle of the legends.

Presumably the next volume in this remarkable series will be published around this time next year.

For further details of these and other Everyman products, please visit:
http://www.everymanchess.com/