Let’s Play Chess
A Step-by-Step Guide for New Players
By Bruce Pandolfini
2nd Edition Revised and Enlarged
136 pages
Russell Enterprises
‘I have tried to be as direct as possible. To make your journey a smooth one, the fundamentals have been broken down into short, logical statements. Each idea is numbered, ordered, and clearly stated. For the most part, statements are linked in graded sequence with the easier ones preceding the harder. The format is unique and easy to follow. You should feel yourself learning step by step.’

Starting with the absolute basics with step 1: ‘Chess is a game of skill played by two people on a board of sixty-four squares. The board is the same one used for checkers’, he moves instructively through everything a novice needs to know in 20 sections.

2. The Board, the Forces, and Their Names

3. The Moves of the Pieces

4. The Object of the Game

11. The Exchange Value of the Pieces

The steps are numbered to create easily digested bite-sized chunks.

A few eye-catching samples should give an indication of what one can expect:

170 ‘Players generally prefer resigning to being mated. This is true especially for veterans. Maybe it has to do with avoiding embarrassment. Or perhaps it’s an acknowledgment of the winner’s skill and accomplishment. By resigning it’s almost as if the loser is saying, ‘I see your point,’ implying a kind of equality with the winner and thearby saving face.’

260 ‘Some players mistakenly think that the fifty-move rule is really a fifteen move-rule, a sixteen-move rule, or a twenty-one move rule. It isn’t, it isn’t, and` it isn’t. There are no such shortcuts to drawing heaven.’

505. ‘Whatever you attempt to do your opponent will try to anticipate, frustrate, and thwart. You may even be allowed to get what you want. That is, your opponent may have seen more than you and has set a surprise ambush.’

There's a number of illustrative positions. Keep in mind that these are for novices as you solve them... 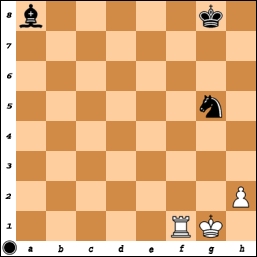 Black mates in one move 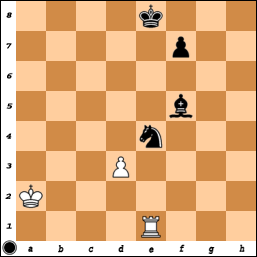 Black can save the Knight 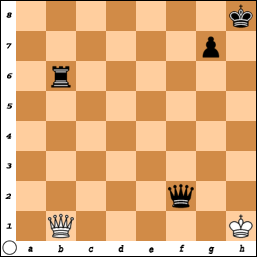 White has a losing game
So…

A lot of chess books for beginners are written with children in mind. It’s not so easy to recommend a book covering things from the very basics for adult readers. Bruce Pandolfini, born to teach chess if ever a man was, neatly plugs the gap with this well-written primer.

Missed a review? Please visit my archive:
http://marshtowers.blogspot.com/2007/12/chess-review-archive.html
Posted by Sean Marsh at 00:26