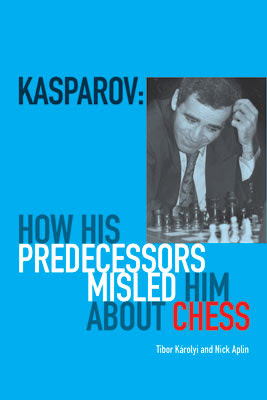 Kasparov: How His Predecessors Misled Him About Chess
Tibor Karolyi and Nick Aplin
271 pages Batsford Chess

‘The present book now provides us with an obvious opportunity to introduce some humour, particularly as Kasparov - we think - subconsciously favoured some teasing of the great players and former champions more so than others. By doing so he invited others to have a joke at his expense too. Humour in chess - sometimes a rare commodity - needs to take its rightful place.’

Karolyi and Alpin wrote two volumes on Kasparov’s games, so they are well qualified to write about the 13th World Champion.

Following the authors’ introduction, in which the ethos of the book is expounded, the rest of the book is presented as if it has been written by Garry Kasparov. Starting with ‘Anatoly the 12th’, the chapters work backwards through all of Kasparov’s predecessors showing how their games (possibly) influenced his defeats. Essentially, the stance is taken that Kasparov is blaming his losses on the other 12 champions.

‘In this book I would like to concentrate on the negative effects that I experienced from the world champions - effects which prevented me from becoming even more devastating in my play.’

There are three ways to read this book:

1) On one level the book is pastiche, a pure spoof of Kasparov’s ‘My Great Predecessors’ series. The layout of the cover is in right style too, albeit in blue rather than red.

2) As it collects a large number of losses for the former champion, one can also read it as a study in ‘How to Beat Garry Kasparov’. If the given ideas are good enough to defeat a player of his calibre then they will be surely be of use in a player’s general armoury.

3) It presents a collection of fine games by the first twelve World Champions, some of which may not necessarily be found in the standard works.

Spoofs can be an acquired taste. The best example of the genre is Hans Kmoch’s parody of Nimzowitsch (famously reproduced in the Bell edition of GM Keene’s ‘Aron Nimzowitsch: A Reappraisal’). Kmoch’s notes were to a single game; keeping the trick alive over the course of an entire book is a much harder task.

Here’s a little sample of what to expect:

‘Botvinnik liked to play on the edge of the board, especially the h-file. Though I won games with this method I also lost some. On the right is a position I remember so well. The patriarch attacked on the h-file while his opponent played along the g-file - and in the two positions below I tried to copy Botvinnik’s method.’ 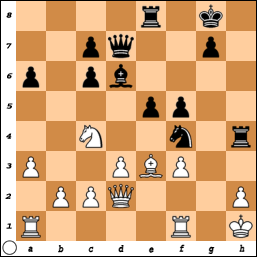 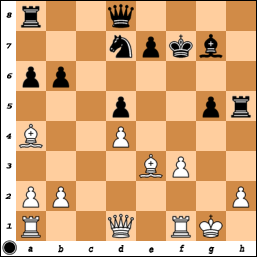 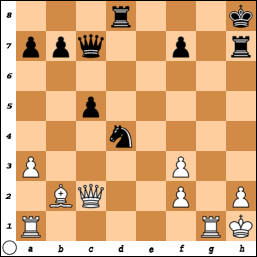 I. Sokolov - Kasparov
Each game is then given in full, with notes. ‘Kasparov’ highlights the critical moments in which he was influenced by his predecessors, with unfortunate results.

‘Botvinnik gave no instructions on his game. I lost track of what to do with my king’

Some World Champions are blamed for more serious things than a single defeat. Alekhine isn't in 'Kasparov's' good books:

‘Indirectly, Alekhine affected me as well, since Kramnik learned from him how to avoid a rematch. He never gave me a chance to prove my superiority over him in a match, the same way that Alekhine denied Capablanca. So Alekhine had an especially marked and controversial influence on my career.’

One of Fischer's attempts to pep up the simple game of chess comes under fire too: 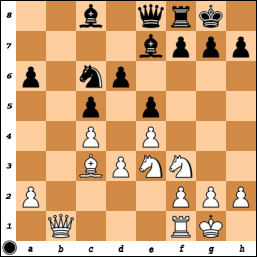 Akopian - Kasparov
Black now played 16...Bd8
‘This move was inspired by one of Fischer’s ideas - Random Chess. At the start of the game the pieces are positioned on the first rank in irregular or random positions. Somehow I must have thought we were playing his brand of chess, so I started to arrange my pieces on the first rank in an unorthodox manner.’

I had doubts that the spoof approach would work in a full book, but it does hold up provided the reader enters into the spirit of the work.

It's certainly an original book, with a curious mix of humour and serious chess, fact and fiction, instruction and entertainment.

I suppose most of us blame our defeats on the 'guy who showed us the line down the club' or 'Grandmaster X' and it's good to know that 'Kasparov' is no exception.

I wonder if anyone dare try and get a copy signed by the real 13th World Champion...? 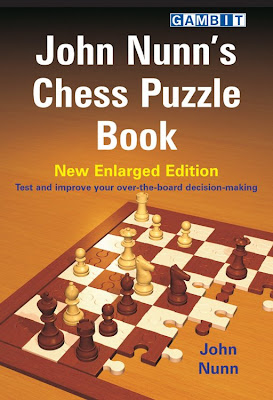 'In a real game, a player may sometimes need to find a combination. On the other hand he may have to reject a tactical idea and simply find a good positional move. His task is to find the right move, whatever it may be. The puzzles in this book put you precisely in that situation.'
Puzzle books are generally popular things. Not many of us can resist pitting our wits against the exercises. They can provide useful, confidence building tactical warm-ups before a match and can act as a useful indication as to how efficient our chess brains are.

This is a revised and expanded version of a book first released in 1999 (Gambit’s early days). Errors have been corrected following feedback from readers and some puzzles have been replaced by new ones.

The original introduction is intact and there’s a smaller, new one to bring matters up to date. Then the reader is plunged straight into the action with the first set of puzzles.

This is a good one, demonstrating the general level: 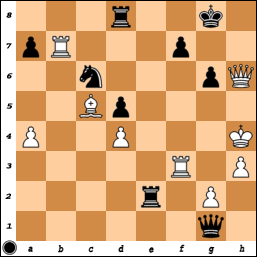 J Polgar - L.B. Hansen
‘Which is the best move here:

There’s a peculiar section between the first two sets of puzzles, called ‘Find the Wrong Move’, in which the reader is invited to do exactly that. I don’t think the idea works very well. There are far too many ways to lose quickly in almost any given chess position; trying to guess the lapse of judgement suffered by the players, out of context, is an impossible task. It would work better as a straight forward section on blunders and missed opportunities.

After the second set of puzzles comes a section called ‘The Test of Time’, which caused controversy when the book was first published.

‘My main interest is in assessing how much the overall level of chess has changed since the pre-First World War period.’

The tournaments in question are Karlsbad 1911 and Biel Interzonal 1993. The quality of games in the older of the two tournaments really struggles to come anywhere near that of the latter event. Yet the players were heavyweights of their time; giants such as Alekhine, Rubinstein, Schlechter, Marshall and Nimzowitsch were all participants.

10 pages of puzzles are based on games from Karlsbad. GM Nunn is clearly of the opinion that the games of Karlsbad 1911 haven’t stood the test of time. However, presenting evidence from but a single tournament is unlikely to be entirely conclusive and the comment about monkeys and typewriters - made in relation to the quality of play - is unworthy. Biel 1993 was only six years old when the book was first published; now it dates the chapter.

In any case, comparisons would hold more water if one was comparing like with like. How do the playing conditions of the two events compare? Were there more distractions - such as spectators - in 1911 or 1993? Were the time-controls similar? There are too many unknown factors which could be stand in the way of a fair judgement.

The third selection of puzzles is new to this edition and features positions from the years 2000 to 2007. Most of these were new to me. Here’s one for you to try. 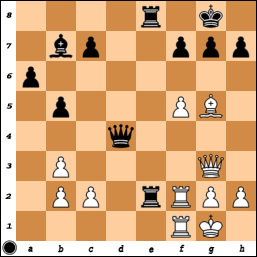 Black to play
White is caught in a pin, but given time she will escape by h3 and Kh2. How did Black force a quick win?

Eight tests - given without clues - conclude the first half of the book. Some are very difficult. Here’s a pretty one which shouldn’t take you too long. 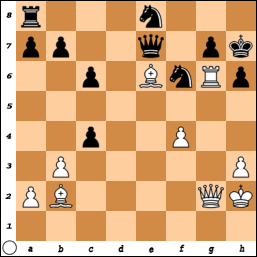 White to play
Hints and fully annotated solutions complete an interesting work. Diagrams, not present in the first edition, have been added to the solutions. This works very well and makes things much easier to follow without having to flick back through the pages for the relevant starting positions.

Despite the two chapters which didn't hit the mark for me, I do think there's some great material here and readers will have fun - and quite a lot of hard work - ahead of them. This puzzle book works much better when it's not trying too hard to be something else.

http://marshtowers.blogspot.com/2007/12/chess-review-archive.html
Posted by Sean Marsh at 10:26