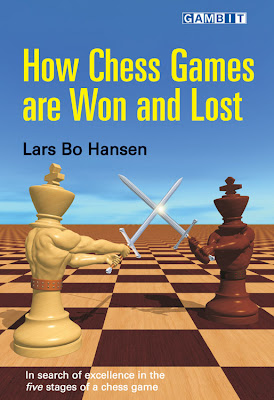 In his introduction, Danish Grandmaster Lars Bo Hansen outlines the five main phases of the game and outlines his proposed plan to help readers on the way to chess improvement.
Right from the start there something a little bit different from the normal chess improvement manual. The phases of the game are usually considered fully listed as merely opening, middlegame and endgame but here the two main phases of transition are given full coverage and encouraged to celebrate their own special existence rather then act of bits and pieces of the other phases.
The contents of the book fall quite naturally into six main sections:
The Opening
The principles of the opening play are discussed and there is a considerable amount of practical advice on how to build an opening repertoire.
One subsection, ‘Where Does the Opening End?’, examines a position at move 27 of a Queen’s Indian Defence - the belated starting point of theory! 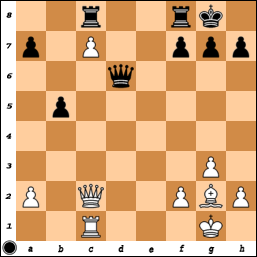 Several top-level game continuations are quoted. The author goes on to say that this sort of extremely deep preparation is something beyond the reach of all but the very top player, and the important thing for lesser mortals is to develop a repertoire that can match one’s own style and strengths.

The Transition to the Early Middlegame

Following a general discussion about central pawn structures - in which the Chigorin Variation of the Ruy Lopez comes under specific scrutiny - the author switches his attention to play arising from the Exchange Variation of the Queen’s Gambit, examining, in great detail, the possibilities for both sides.

Various methods of battling for the advantage are examined, followed by a general look at typical middlegame tactics.

Some are really eye-catching, including this fantastic display of ‘quiet moves’. The moves are fully annotated in the book; for now, just enjoy the sequence and try and fathom out the motives for each of Tal’s surprising moves… 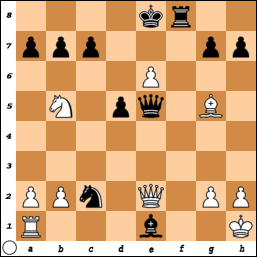 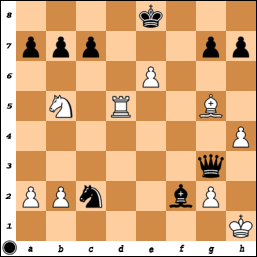 Transition from Middlegame to Endgame

Strategic Endgames are on the agenda in this section, in which ‘…The value of concrete calculations and tactics is decreasing, while long term factors take over centre stage’.

The author provides a subjective selection of illustrative positions, with the emphasis firmly on those form his own experience. There’s also some interesting material on unbalanced material situations, such as Rook and Bishop v Rook.

The tips given include how to work with computers and how top prepare for specific opponents.
The concluding tips feature acronyms geared up to assists players in time-trouble. Specifically: DAUT, NUPM and KAPP. The first of these (originally formulated by GM Nunn) stands for ‘Don’t Analyse Unnecessary Tactics’. Dear readers, if you don’t know the others you’ll just have to buy the book to find out.

This is an interesting and very readable book. It is similar in style to John Watson’s ‘Secrets of Modern Chess Strategy’ and GM Yermolinsky‘s ‘The Road to Chess Improvement’; if you liked those books, you’ll definitely enjoy this one.

The author has clearly worked very hard to produce an impressive manual for the developing chess player. Readers will find an abundance entertainment and instruction in this excellent book. 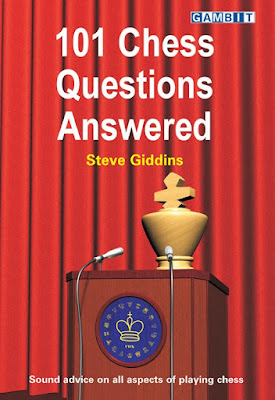 I enjoyed reviewing a previous book by FM Giddins (see review column 31: http://marshtowers.blogspot.com/2007/11/chess-reviews-31.html) and was looking forward to the release of this one.

In his own words:

‘This book covers a wide variety of aspects of chess, including tactics, strategy, openings, middlegame and endgame, chess history, computer chess and chess organization. It is aimed primarily at relative newcomers to the game, especially those who are familiar with the rules of chess, but have little or no experience of competitive play.’

Each ‘Chess Question’ and its answer typically takes up one page (occasionally two).

The material is split into eight sections:

The early questions and answers offer advice on how to go about finding a chess club, before covering some basics of the openings.

The tactics are fairly elementary and work well as illustrative examples. The reader has the opportunity to spot winning continuations against six world champions on the road to improving their tactical skill. 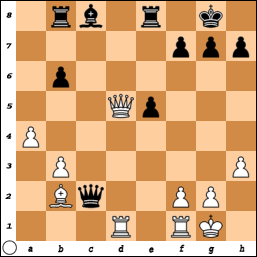 ‘Positional Play’ asks questions about all sorts of pawn structures and comparisons of the strengths of various pieces.

‘Knowing which pieces to exchange and which to retain is an essential part of positional play. One very good reason for exchanging pieces is to remove a key enemy unit. 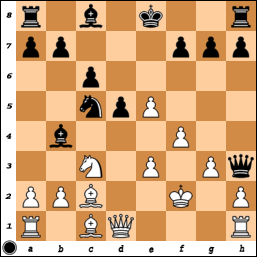 The light squares in White’s camp, d3, e4, f3 etc., are weak. Botvinnik immediately exchanges off the two white minor pieces that can defend those squares, leaving White with only his dark-squared bishop:

Now the weakness of the light squares is very clear. Black has a large positional advantage, and went on to win.’

Incidentally, despite Botvinnik making things looks simple (and there are plenty more examples of him doping exactly that in this book), Makogonov was certainly not a weak player. At Sverdlovsk he held second place, behind Botvinnik, ahead of the likes of Smyslov, Kan and Boleslavsky.

I’m not sure that all of the chess books selected for further reading will necessarily hold the attention of a relative newcomer. Some of them, such as Rueben Fine’s Basic Chess Endings and Alekhine’s books on the New York 1924 and Nottingham 1936 tournament, will come across as somewhat unwieldy or unwelcoming, due to their old fashioned and dated layouts. Frankly, updated algebraic editions of some of the real classics are required to make them more accessible for the modern audience.

This book is absolutely ideal for players new to club and tournament chess who would like to plug a plethora of gaps in their knowledge with the minimum of time and fuss. Players with greater experience should also enjoy browsing the contents, especially as some of the illustrative games will almost certainly be new to them. 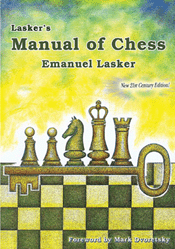 Grandmaster Emanuel Lasker, the second World Champion, was a fine writer. His Manual of Chess is a famous work and the ‘New 21 Century Edition’ aspires to bring this classic work to the appreciation of the modern audience.

The ‘Foreword’ is by GM Mark Dvoretsky and he states that the manual ‘…has not lost its relevance even now, some eighty years after it was first published’.

‘Once you have read the Manual, you will become wiser, which is bound to help you later on, both in chess and in life.’

Taylor Kingston highlights some particularly interesting parts of the manual and explains the extent of his editorial duties. These include checking the analysis with a computer, converting the descriptive notation into algebraic and adding pertinent snippets of ‘Lasker Lore’ at various junctures.

The original work is further augmented by the addition of a number of classic photographs of Lasker and his contemporaries, plus the great man’s tournament and match record.

The Elements of Chess

Lasker starts at the very beginning, with the number of squares of the chessboard, the names and moves of the pieces plus some elementary checkmates and endings.

The Theory of Openings

Typically, for the time it was written, the opening coverage is very heavily biased in favour of King’s Pawn Openings. Theory was very much in its infancy in those days. Lasker’s notes are very much in the style of a common sense survey.

Experienced players will start to enjoy the material more from this ‘book’ onwards. The combinations draw heavily from games by the likes of Steinitz, Tarrasch and Capablanca.
Here’s one of the simpler examples… 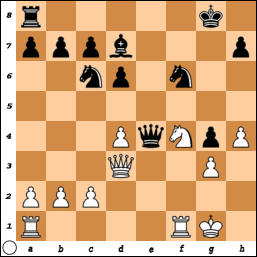 The meat of this section is Lasker’s in-depth review of the theories of Steinitz. He does not stint in his praise and appreciation of his predecessor. Such honest thoughts are rare when one champion writes about another, although Garry Kasparov has followed Lasker’s lead in recent years.

The Aesthetic Effect in Chess

The search for real beauty in chess involves the examination of wonderful studies in addition to famous combinations.

The following passage is typical of Lasker’s delightful writing style:

‘Let us now conceive of the simple case of a recital. We are told a story. David, no larger nor stronger than any one of us, vanquishes the challenging giant Goliath by means of a sling. If David approached his enemy, the giant would use his exceeding power and his terrible weapons, the brutal force would consume its adversary as a dragon would a lamb. But the brutal force does not get its way, it is subdued by the force of the spirit. When mind overcomes matter, we are charmed.

In chess the brutal force is composed of the number, strength, and mobility of the pieces and the difficulty of the task set. If this brutal force is bested by the few in number, the slight I strength, in moves which indicate rather weakness than force, which announce rather defeat than triumph, by the power of the spirit, by an idea which, seemingly absurd, yet is truth itself, we are delighted.’

His first example is a problem composed by another of his illustrious predecessors. 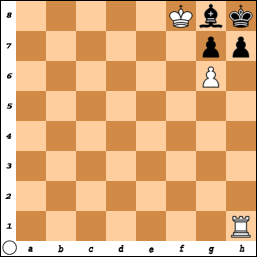 By Paul Morphy
White to play and mate in two moves

Lasker presents numerous illustrative games and positions to demonstrate his ideas and theories in practice. The author uses only a single example of his own play, preferring instead to highlight magnificent technique by such giants as Alekhine, Capablanca, Bogolyubov and Rubinstein.
In his concluding thoughts on ‘Education in Chess’, Lasker, as part of bid to add structure to the teaching of chess, offers a timetable to guide a Master in the education of ‘…a young man, ignorant of chess’.

The final section, ’Analytical Endnotes’, covers corrections and amendments to Lasker’s work by Taylor Kingston. This takes 24 pages and is done in a very respectful way rather than a critical one.

It’s good to see such a classic book treated with the respect, care and attention it deserves. Naturally, some of the original content has dated and is ‘only’ of historical interest. However, the bulk of the work retains its vitality and will provide many hours of entertainment and instruction, from the man who was World Champion for just under 27 years.

Hopefully, Russell Enterprises will continue to resurrect chess classics in this manner. How about the aforementioned Alekhine tournament books…?