GM Davies has had considerable experience with the King’s Indian Attack and is the ideal choice of presenter for this DVD.
Over the course of more than five hours, he guides the viewer through the main strategies and plans of the King’s Indian Attack via 23 illustrative games.
Given the somewhat slippery nature of the KIA, the coverage focuses more on the ideas and plans side of things rather than specific move orders and lengthy theoretical lines.
GM Davies explains that there are two main ways to add the KIA to one’s repertoire. It is possible to use it in all games via the normal move-order 1 Nf3, 2 g3 etc. Played that way, it can be a good practical choice for club players, especially those with little time to follow the latest theoretical developments.
It can also act as an extra string to a 1 e4 player’s bow. For example, the French Defence can be met by 1 e4 e6 2 d3 (an occasional Fischer favourite) and the Sicilian can come in for the same treatment too, especially after 1 e4 c5 2 Nf3 e6 3 d3.
The Caro-Kann isn’t immune either; there are a couple of illustrative games showing how the late, great GM Leonid Stein roughing up those who tried to keep his tactical ability at bay with 1 …c6.
The first half of the DVD looks at games arising from 1 e4 and 1 Nf3 is examined in the latter half.
The first illustrative game shows the 11th World Champion in action, demonstrating the sort of devastation a strong player can inflict once having seized a deadly combination of extra space and the initiative on the Kingside. 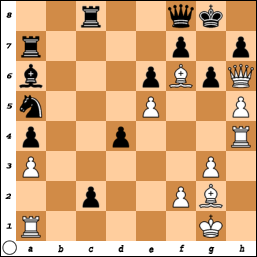 The game is famous, but if you haven’t seen it before then why not see if you can spot the mating finale.

One problem from White’s point of view is that Black has a very tough nut to crack in the form of this key position. 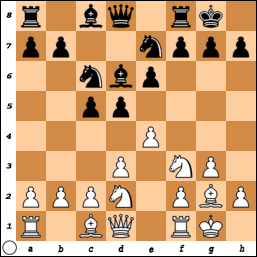 GM Davies advocates an aggressive plan with 8 Nh4 and 9 f4. Conventional wisdom has it that Black is comfortable after 8 …f5 or 8 …f6 (well known to French Defence aficionados, thanks mainly to the efforts of top 1...e6 author John Watson). The presenter freely acknowledges that the system is a good one for Black. His solution is a suggestion to trade pawns with 9 exd5 and to focus attention on the potential weaknesses on the e-file.

Naturally, starting a game with 1 Nf3 grants the opponent quite an array of different responses, including some odd looking tries. Black’s standard defensive tries are all nicely covered and lines are also given to cover peculiar tries such as 1 Nf3 Nf6 2 g3 b5 (incidentally, a former Karpov favourite).

So, dear readers, when it comes to the King’s Indian Attack the choice is yours; it can be your main White weapon or an occasional addition to your existing repertoire. Either way, studying this DVD is a great way to acquaint yourself with all the knowledge you need to get yourself up an running with a new opening.

Grandmaster King starts the latest DVD in his impressive series by jumping straight into 16 test positions, encouraging the viewer to use a set of real pieces with which to conduct the analysis.

He also recommends playing through all of the moves up until the point that each test position is reached, to appreciate the flow of the game and provide an instructive link between the different phases of the game. Such an approach will help the student build up a series of clues towards the correct continuations.

Having made the viewer work, GM King then introduces the content of the DVD.

The path to improving one’s pieces relies on manoeuvring, often in a general sense. Particular attention is paid to pawn structures and their influence on various pieces, in the context of whether they are good or bad; for example, the hypothetical bad ‘French Bishop’.

The test positions are explained, one by one, with follow-up lectures to broaden the picture with further instructive illustrative games. GM King breaks things down to the basics, piece by piece, but impresses the need to keep a sharp tactical eye despite the outwardly positional nature of the games.

Little anecdotes are often given too, such as the presenter reminiscing about GM Keene announcing loudly - Victorian-style - checkmate in three against him!

Here are a couple of samples from the test positions to give an indication as to what to expect. 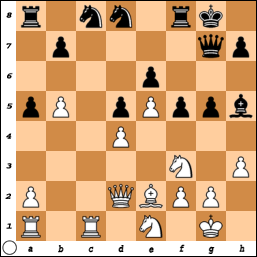 How should White continue? 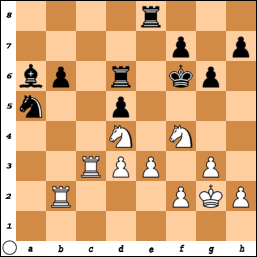 This one is a cautionary lesson. White eventually won after 73 moves, but sometimes deep manoeuvring can lead to curious oversights by even the great players. What should White play here?

There are 28 lectures with the length of each one varying between two and a half minutes and 27 and a half minutes. The total run time is just under 5 hours; excellent value for money, as always with ChessBase.

A run of five games by Kramnik towards the end of the DVD show the former World Champion on rather better form than he was in his recent title challenge.

The ‘Afterword’ makes good use of a Fischer game, highlighting the temptation to win material mid-way through the unfolding of a plan.

Taking material can win a game, but can also be a distraction, destroying concentration and changing a formerly favourable trend of play. It’s a tricky problem and one we’re prone to get wrong over the board. Fischer’s powerful game should help us all think twice before stalling a good plan to pick up sundry booty.

It is possible to play all of the video clips without analysing the test positions, and the viewer would definitely learn a lot. However, by the far the most rewarding experience would be to enter fully into the spirit of the presentation; trying very hard to assess the given positions before moving on and comparing one’s findings with the chess secrets revealed by GM King.

This is another excellent addition to a very fine series. Products on the middlegame might not have the quick-fix appeal as a manual on an opening but the lessons given here are for life; no amount of developing theory is ever going to dilute the wisdom provided here.