On the Playlist: Gemma Hayes 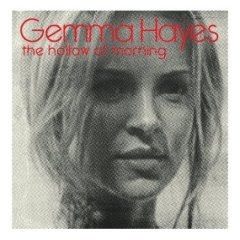 Gemma Hayes
the hollow of morning
The female vocalist has rarely - if ever - been as well represented and appreciated as it is now.
I have gravitated towards a number of established singers over the last few years including Emmylou Harris, Patty Griffin, Nanci Griffith and Lucinda Williams (see here:
http://marshtowers.blogspot.com/2007/12/entertainment-part-3.html for my review of a show by the latter).
Some of the newer acts have impressed me too, such as KT. Tunstall, Amy Macdonald and Gemma Hayes.
The first two have had a massive burst of popularity over the last year (deservedly so) but the third is, for some, still very much a 'best kept secret' so I was pleased indeed to find that her long-awaited third album, ‘The Hollow Of Morning’, was available at last.
Night On My Side and The Roads Don’t Love You came out in 2002 and 2005 respectively. I enjoyed the intimacy of the lyrics and generally understated style of delivery. The second album was the more commercial of the two but neither is particularly easy to find in the high street.
The new album is self-produced (numbered GH001) and once again all of the songs are written by Gemma Hayes herself.
Track listing:
This Is What You Do
Out Of Our Hands
January 14
Home
In Over My Head
Chasing Dragons
Don’t Forget
Faster tempo
Sad Old Song
At Constant Speed
Under A Canopy
The first two tracks are very strong. The gentle opener starts things off in trademark style. Acoustic guitar well to the fore, with a catchy little riff and very soft, almost breathless lyrics. On Out Of Our Hands the tempo is lifted, which is more in the style of ‘The Roads Don’t Love You’

My other favourites are:
In Over My Head With it’s opening of a chiming church clock and birdsong, this strong track soon builds in tempo.
January 14 and Chasing Dragons are true solo efforts; the vocals, guitar and piano are all credited to Gemma. The first is a short song, with the lyrics almost spoken rather than sung; the second surely one of the most personal on the CD.

The instrumental ‘Under A Canopy’ (listed as ‘Under A Canopy Looking At The Rain’ in the credits section) brings things to a gentle conclusion.
It's not so easy to find in the shops but yo should be bale to track it down fairly easily online.
Meanwhile, keep checking her website for tour dates; hopefully there'll be an appearance in the North East of England some time in the future.
http://www.gemmahayes.com/
Posted by Sean Marsh at 10:00

Gemma has also just signed a record deal in the US. The Hollow of Morning will come out on Second Motion Records, Sept 30th. Second Motion also works with artists such as: Adam Franklin of Swervedriver, Daniel Lanois and Brian Vander Ark (of the Verve Pipe)