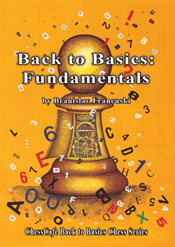 Back to Basics: Fundamentals
By Branislav Francuski
Russell Enterprises
Branislav Francuski has been teaching chess in New York for over 15 years. In his preface he discusses some of the benefits of chess for children. He goes on to explain his reasons for writing the book.
‘From years of teaching chess, I realised that the book my students needed the most had not been written. The chess books available provided only a few simple and easy examples of checkmate for beginners, and, after a few easy puzzles, the children would get discouraged when they could not solve more difficult problems. Subsequently, some of them would give up altogether. Thus, I decided to write this book to provide beginners with many different checkmate puzzles, and to encourage their progress.’
Mark C. Donlan provides the introduction, taking the reader up to number 33 of the 191 pages.
Mark covers:
The Origins of Chess
The Chessboard and Chess Notation
How the Chessmen Move and Capture
It is here that one of the main design advantages of the book first become really apparent; key points are presented in blue type, nicely contrasting with the black of the main text. Advice-giving ‘box outs’ are in blue too and thus has the effect of drawing the reader’s eye to important information.
The whole introduction provides excellent coverage of all the basics of chess, taking I its stride everything one needs to know from A-Z (Anderssen to Zwishenzug!).
The main content of the book comes in the form of 738 chess puzzles. These are split into several sections, each one featuring a small scene-setting introduction and answers will full explanations.
The puzzles start off very simply, asking the reader to identify which things can be captured, whether a particular position is checkmate and other such basic questions.
Lots of ‘checkmate in one move’ puzzles follow and then eventually some simple tactics are examined.

The chapter headings show the breakdown of material:

Simple Checkmates in One Move

More Checkmates in One Move

Even More Checkmates in One Move

Miscellaneous Checkmates in One Move

Puzzles from My Students

This is an excellent book for beginners, teachers and coaches. Having mastered the Fundamental material, it's time to move on to.... 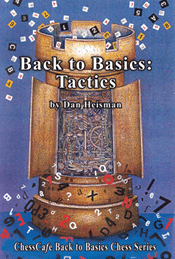 Back to Basics: Tactics
By NM Dan Heisman
Russell Enterprises

‘Tactics’ makes a natural sequel to ‘Fundamentals’. In the words of the author:
‘This book is an introduction to the various kinds of basic tactics. I try to comprehensively cover the subject with instructional material, examples, and problems of all types. There are about 500 examples ranging from too easy to very difficult! Oh, and by the way, tactics are usually why most people find chess fun! I hope this book greatly enhances your enjoyment learning about - and benefiting from - the recurring patterns of tactics.’

Over the course of the packed 192 pages, NM Heisman presents a master class in all things tactical, covering all of the following categories:
Safety and Counting

The Seeds of Tactical Destruction

Is There a Win?

The Five Levels of Tactics

The format is similar to the ‘Fundamentals’ volume, with a short introduction at the start of each chapter setting the scene for the abundance of examples the reader is invited to try and solve.

Pertinent snippets of advice feature in the many blue box-outs, such as this:

'Just because you can solve a tactical problem does not necessarily mean that you will spot the tactic in a game. The most important goal of studying tactics is to be able to spot the elementary motifs very quickly, so studying the most basic tactics over and over until you can recognize them almost instantly is likely the single best thing you can do when you begin studying chess!'

When studying tactics, especially for the first time, it is necessary to build up one’s knowledge like tiny building blocks of wisdom and experience. Consequently, a manual looking at the basics of the genre should start of with simple examples and work towards more difficult problems along the way.

That is certainly the case here. The very first test position in chapter one starts a series of simple counting problems. 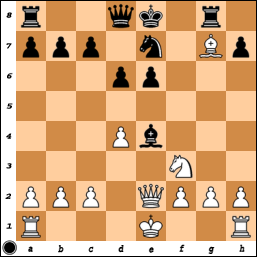 Black to play and win
Once the basics have been expounded and consolidated the reader is introduced to tougher material. Chapter 6, ‘78 Problems on 64 Squares’, plunges the student into a forest of positions with no clues or other navigational aids.
Some are from famous games, others are from studies. Anyone going through all of the positions will definitely have there tactical insight enhanced and by this stage will be spotting recurring patterns and themes with increasing alacrity.
A couple of randomly selected examples should illustrate the level of the material: 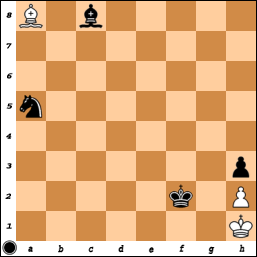 Black to play and mate in two moves 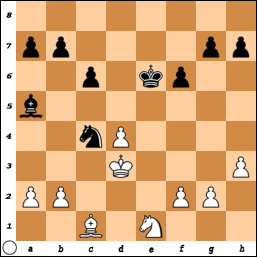 Other notable chapters are 'Opening Sequences', which takes a good look at some well-known opening traps and 'Defensive Tactics', showing that tactical weapons exist certainly not just for the attacker to have all the fun. 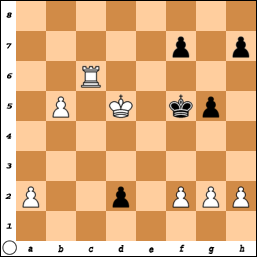 White to play and stop the pawn

'Is There a Win?' , acknowledging that problems and puzzles are made easier when the solver is told that there is a winning move available, presents a number of positions in which the task is to decide whether a tempting move actually wins or is just a good looking flatterer. 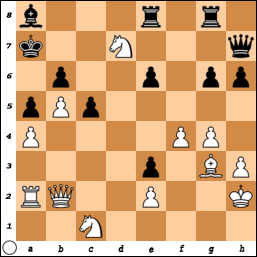 White to play. Is there a winning move?

Now that your solving powers have been developed beyond the basics, it could be time to tackle some more heavyweight material... 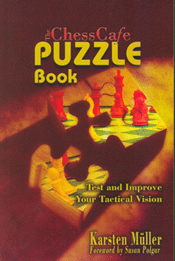 GM Karsten Mueller is well known for his sterling work for Chessbase, particularly on the endgame.
A glance at the contents neatly sets the scene for what is in store.
Motifs
Easy Exercises
Endgames
Opening Traps
Find the Defense
The Five Most Beautiful Combinations
Tests
Solutions
Score Chart
The initial chapters set the scene and guide the reader through the various tactical motifs. Repetition is one of the keys to tactical success, as advised by the author:
‘From my own experience I have decided that it is best to sort the tactics by motifs first. This will help your pattern recognition, an extremely important skill. I believe that it is crucial in becoming a strong player.’
‘I even suggest that you solve them several times…Of course you should wait about one week each time.’
The choice of material is excellent and contains much that is new to me. It’s especially useful to see examples from events which wouldn’t normal reach my English eyes, such as the German Bundesliga. 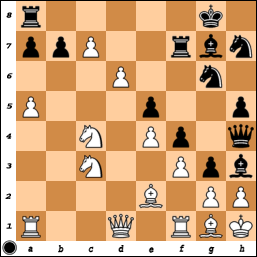 Truly a position to warm the hearts of King’s Indian players throughout the world. Can you see how Black forced mate - in five moves?

Of course, an endgame expert can’t be separated from his favourite subject and there’s a chapter devoted to positions with reduced material. After all, one must be very aware of tactical devices in all phases of the game; the endgame is certainly no exception. 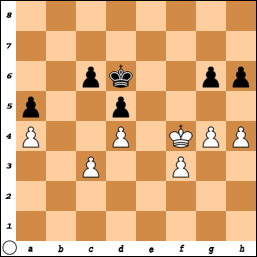 Nielsen - Rewitz
Aarhus 1989
How did White break through?

Just before the real test starts, final inspiration is supplied by the authors choice of ‘The five most beautiful combination of all time’.
Kasparov - Topalov (you know the one) is there, of course, but it is good to see the older classics have not been neglected. 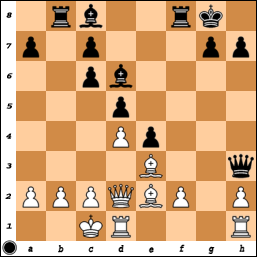 Another good feature of this book is the way that educational, common sense snippets are found in between the positions. For example, in the section covering Greek Gift sacrifices, GM Mueller (in a neat reversal of Vukovic’s list in ‘The Art of Attack In Chess’) says of the standard Bxh7+ sacrificial attack:
‘It is easier to list the conditions under which it does not work first:
1) Black’s King is on g8, White’s Knight on g5 and his Queen on h5, and:
1.1) Black can play Nf8, Nf6, Bf5 or something like Qc2 or Qd3 to protect h7.
1.2) Black’s King can safely escape via f8 because f7 is protected.
1.3) Black’s material advantage is already so large that he can afford Qxg5

Finally the reader is asked to do some real work. There are ten tests, each containing 16 positions. The author advises that each test should be done on a different day and that two hours should be allotted for each one. Points are awarded for correct answers but they can be deducted for consulting the ‘hints’ pages.

This is an example of the tougher problems. White to play and win, but it’s no two-mover! 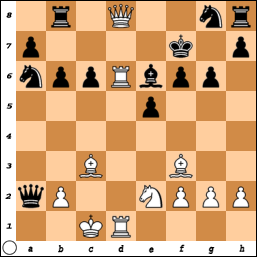 The score chart ranges from 0-1 (‘Study the first chapters again!’) to 40-42 (‘Over 2700 (ELO) - Challenge the World Champion!’) but the author offers the sensible reminder:
‘Of course the values (your ‘Tactical ELO’) should be taken with a large grain of salt.’
Whether you are prepared to stcik at the tests and invest the amount of time required to gain the maximum benefit from the maetrial, or whether you just fancy dipping in to warm up before your next match, there are plenty of fantastic and inspirational positions here to you happy, entertained and busy for some considerable time.
For more on books from Russell Enterprises, pop along to: http://www.chesscafe.com/
Missed a review? Please visit my archive:
http://marshtowers.blogspot.com/2007/12/chess-review-archive.html
Posted by Sean Marsh at 00:03