Fritz has long been known as the leading chess software on the market. I was delighted to be able to review the very latest version.

It took just a few minutes to load the software onto my laptop and then suddenly Fritz was ready for action.

The first menu offers a choice between 'Play Fritz', 'Playchess.com' and 'Chess Course'. 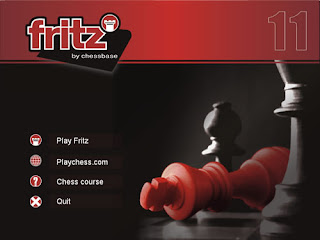 ‘Chess Course’ takes one to two main features. One is a comprehensive ‘Beginner’s Course’, presented by IM Andrew Martin using video clips and board graphics. This is a fabulous teaching feature for total novices, taking the student quickly over the very basics, such the chess board and the names of the pieces, through to moves of the pieces and some demonstrations of standard checkmate patterns.

Next, there are samples from no less than 53 of the high-quality Fritz Trainer DVDs. Each clip features a top player (Kasparov, Kramnik, Korchnoy, Shirov etc) giving a chess lesson. Some of them are nearly 20 minutes. Each clip is accompanied by a direct link to the Chessbase shop, giving the viewer the opportunity to pursue their particular interests with ease.

Clicking on ‘Playchess.com’ is a quick and easy way into what is probably the best of all chess playing sites (at least, it’s the best one I’ve ever known). The online navigation is simple enough and within seconds it is possible to be playing an opponent from the other side of the world. There are some new features here, including a ‘tactical competition’, in which a player has five minutes to solve as many problems as possible.

Buying Fritz gives a free one year membership to play.
'Play Fritz’ takes one to the meat of the product. First, these an audible greeting! Straight away, there is a very strong temptation to take on Fritz in a blitz game. I’ve played against nearly all of the versions over the years, starting with Fritz 2, and have on occasion managed a very rare draw (and a even rarer victory). This time I played quote a few games in a row and found I could hardly ever get into a playable middle game. With an absolutely ruthless efficiency, Fritz mercilessly exploited every single mistake. It’s audio aspect didn’t take long to start gloating. I didn’t take too much longer to turn off the sound. Naturally, the latest version of Fritz is the strongest to date and even though I was just playing blitz games, the accuracy of the program gives a little indication as to the intensity of the struggle faced by (then-World Champion) Kramnik when he played a six-game match against it in 2006.

Finally resigning myself to fact that I’m not going to win a any games on this occasion (…well, what can I say? I haven’t played much recently and feel I am somewhat rusty…) it was time to investigate the other Fritz features.

There are two chess variants to play: Giveaway Chess and Chess 960. The latter is the one where the initial position is selected randomly from a total of 960 options. My first attempt started with this bizarre position. 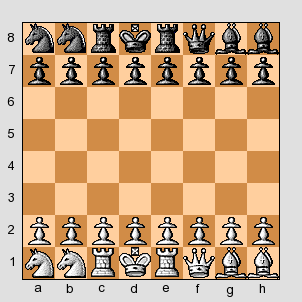 It’s first move was 1 0-0-0 and I immediately understood I had a lot to learn! There are also many training levels, in which a player can practice openings, tactics and endgames. The idea is simple: load up one of the given positions and play on against Fritz until the technique is mastered.

Some of the positions are classics, such as this ‘pawn breakthrough’ 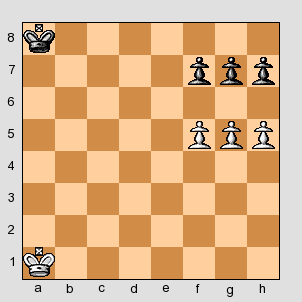 Others are of the tricky type we never practice enough: 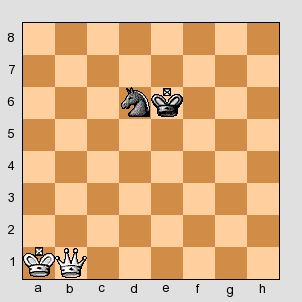 White to play - could you beat Fritz from here?

There’s a massive database of games, stretching across the centuries from game 1 from the year 1625 (actually some analysis by the great Greco) all the way to game 1245231 (!), a blitz play-off game between Leko and Ivanchuk at the end of 2007. There are no annotations, but there are plenty of search options to quickly find a game, player or variation of interest and of course it is an easy task to load up an analysis engine to help study the game.

The chess board can be viewed in normal 2D or even 3D. A new feature for Fritz 11 is the magic eye. This shows laser beams scanning the board, revealing Fritz’s thoughts as it plays!

Fritz 11 will provide you with many hours of fun and also serious chess experiences. Any keen player - regardless of current age and playing strength - cannot fail to improve their chess strength with this magnificent product.

Highly recommended to all!

For further details of Fritz and other Chessbase products, please go to:
http://www.chessbase.com/

I think the Magic Eye is just a gimmick, but it looks pretty :)

I enjoy playing Fritz at his top strength, but I don't have alot of time, not do I like to lose every game. So I try this training method:

1) Get a database of recent grandmaster games.
The Week In Chess available weekly (obv.) from http://www.chesscenter.com/twic/twic.html is perfect.

2) Play through the games then at the point where one Master resigned for no reason (to my untrained eye!) I play the winning side against Fritz.

3) Hopefully I'll find the winning plan and even the tactical might of Fritz will fall to my expertly commanded troops.

Thanks Bill, glad you liked it.

Your tip for improving sounds very interesting - I must give that a try.

By the way, there is a Marsh Towers forum (see the links on the left); it would be great to see you on there too :-)